China’s New Crackdown Shows $1.5 Trillion Tech Rout Not Over Yet

Just as a growing number of investors believe China may ease private-sector crackdown to focus on growth, they were reminded on Friday it may be too soon to make that call.

Within less than an hour, food-delivery giant Meituan sank as much as 18% in its worst loss in nearly seven months after China issued new guidelines asking food-delivery platforms to cut fees they charge restaurants. Hong Kong’s Hang Seng Tech Index, which tracks mainland’s biggest tech companies, also tumbled the most in three weeks.

The sudden slump shows buying the dip still proves a risky move for some market watchers even as valuations for China technology firms have plunged to historical lows. And the brutal selloff that wiped out more than $1.5 trillion from the sector may have yet to hit a bottom. 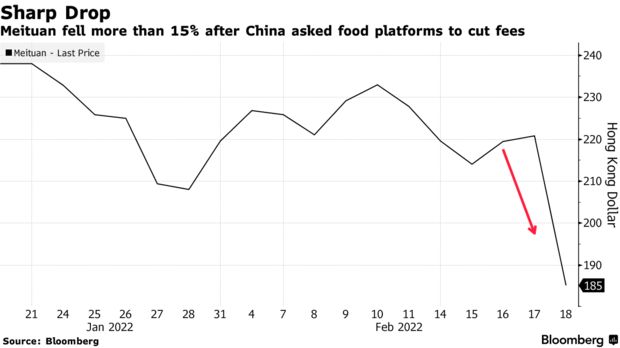 “This new rule has come as a surprise and in the short term, fears can run stronger than reasons,” said Hao Hong, chief strategist at Bocom International in Hong Kong said, referring to the fee policy for delivery companies. “So for now, we would not try to stand in front of a runaway train.”

What once seemed an unstoppable ascent of China’s Big Tech started to crumble a year ago, as Beijing’s crackdown in pursuit of “common prosperity” upended the fortunes of the likes of Didi Global Inc. and Alibaba Group Holding Ltd. The Hang Seng Tech Index has halved from its February 2021 peak. The Nasdaq Golden Dragon Index, a measure of U.S.-listed Chinese names, has slumped about 60%.

Investor hesitation lies with the unpredictability of Chinese regulation. The nation’s education stocks took a renewed dip in recent weeks following last year’s plunge as speculation swirled over intensified crackdowns. And while the bullish chorus on China — ranging from strategists at Goldman Sachs Group Inc. to those at Jefferies Financial Group Inc. — emerged from the last quarter of 2021, shares have yet to stage a major turnaround.

To be sure, the Hang Seng Tech Index is trading near its lowest level versus its 12-month forward earnings and sales forecasts. E-commerce giant Alibaba and smartphone maker Xiaomi Corp. are cheaper than utility stock CLP Holdings Ltd. in Hong Kong — which typically has lower growth potential. The Hang Seng Tech Index is set to outperform the Nasdaq 100 Index for a second month in a row. 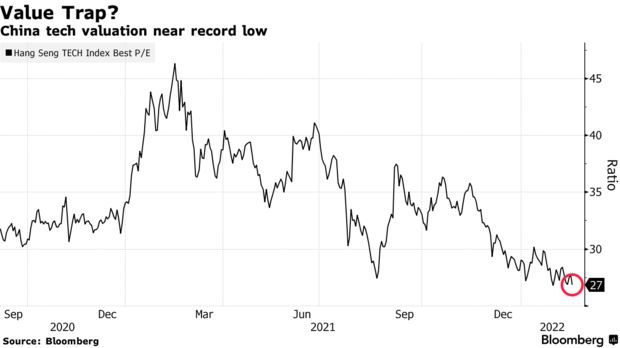 For some analysts, valuation may come down further as tech companies implement the suite of new regulations and face higher costs of doing business.

“We haven’t yet seen a large enough catalyst to shift the valuation regime back towards prior levels,” said Bloomberg Intelligence analyst Matthew Kanterman. For regulation, “there still remains implementation risk as large companies like Tencent adopt these measures across their businesses.”

Just how far-reaching China’s continued clampdown has been on the profitability of some of the biggest tech firms will be on full display in the coming weeks as they release earnings. Alibaba will report next Thursday.

“The knee-jerk reaction shows market fears over China’s regulatory tightening haven’t been completely eradicated,” said Daniel So, a strategist at CMB International Securities. “Overall, the market is expecting more granular regulatory measures to be rolled out this year even though the worst of crackdowns should be over.”