China’s inflation moderated in May as global commodity prices cooled and consumer demand weakened, leaving room for authorities to ease monetary policy and add stimulus to shore up the economy.

The producer price index rose 6.4% last month from a year earlier, the weakest pace since March 2021, National Bureau of Statistics data showed Friday. That compares to 8% growth in April, and it was in line with economists’ expectations.

Consumer prices, meanwhile, rose 2.1%, just under the median forecast of a 2.2% increase in a Bloomberg survey of economists, and unchanged from April. 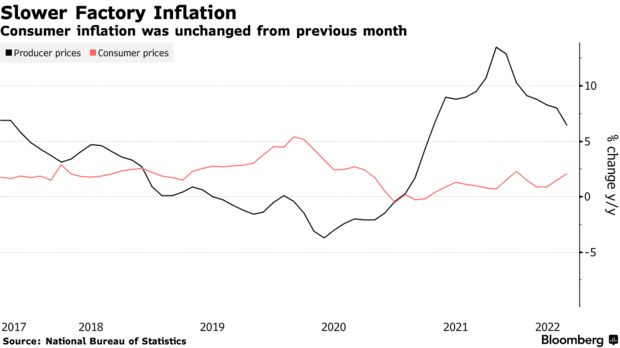 Along with the slowdown in PPI, relatively subdued consumer inflation will likely ease concerns among Chinese policy makers about how and when to enact more stimulus this year as the country tries to shore up its Covid-battered economy.

“This is not an economy where the central bank really has to worry about inflation,” Michael Spencer, chief economist and head of research at Deutsche Bank AG, said in an interview on Bloomberg Television. “Even if we get a bounce-back in the third quarter as hopefully these lockdowns come to an end, it’s going to bounce back to a very moderate inflation rate, modestly below trend of growth in China.”

China’s equities traded between small gains and losses, with the benchmark CSI 300 Index most recently rising 0.4% as of the mid-day break. Government bonds were little changed.

Inflation in the world’s second-largest economy is a sharp contrast to many other major economies. The US reports May CPI on Friday, with economists expecting a rise of 8.3%, unchanged from April.

China’s slack inflation data for May underline weakness in the economy and add to the case for the People’s Bank of China to increase stimulus further. A drop in the CPI from April tracked weak demand from households whose sentiment has been battered by Covid restrictions.

Global commodity prices aren’t as high as they were earlier this year when the war in Ukraine broke out, contributing to the moderation in factory-gate inflation. Smooth and stable supply and industrial chains helped ease the increase in PPI, said Dong Lijuan, a senior statistician at the NBS, in a statement.

Pork prices, a key component in China’s CPI basket, fell 21.1%, dragging the headline number down by 0.34 percentage point. Fresh vegetable prices rose by 11.6% year-on-year in May, while fresh fruit prices increased by 19% during that time, driving CPI up by a combined 0.58 percentage point. Fuel prices for vehicles climbed by 27.1% from a year earlier.

The unchanged core CPI suggests “underlying domestic demand is soft,” said Liu Peiqian, chief China economist at NatWest Group Plc. As headline CPI remains below the government target of 3% and as PPI normalizes, she echoed expectations that the People’s Bank of China won’t see inflation as a concern for policy.

Stimulus from China’s central bank has been relatively modest this year. The PBOC cut its one-year medium-term lending facility rate in January, but refrained from cutting it again last month despite mounting evidence of a slowdown in economic growth. Policy makers have instead relied on using structural tools to target weaker areas of the economy, such as relending programs for small businesses.

The PBOC is scheduled to review the MLF on Wednesday. The median estimate among economists surveyed by Bloomberg is for the rate to remain unchanged this month, given ample liquidity in the interbank market. Some analysts have said the central bank could tweak policy, either now or later this year.

NatWest’s Liu said she expects the PBOC to cut its policy rate by 20 basis points by the end of the year. She also expects a cut to the reserve requirement ratio, the amount of cash banks must keep in reserve, by 50 basis points in 2022. The central bank last reduced the RRR in April, by a smaller-than-expected amount.

US is so bent on resisting China’s rise, it has ignored its own decline