China’s metaverse economy, like its real-world activity, is turning into the new battleground for the nation’s biggest technology companies.

Ma Tianyi at Minsheng Securities in Shanghai is bullish about the prospects in the virtual world. Large-scale spending by industry giants like Facebook owner Meta Platforms, online-games platform operator Roblox Corporation, Fornite creator Epic Games, Tencent Holdings, and Baidu are signs that the successor to the internet will create loads of opportunities for investors in the US$13 trillion onshore stock market.

“The metaverse is a tool to improve people’s daily life and work and boost corporate efficiency,” Ma said in an interview this month with a local media outlet, The Paper, which credited him as a pioneer analyst in the field. “Our yearning for [virtual] immersion, social networking and digital assets is also part of what defines the metaverse. For sure, it will be with us today, and for generations.”

At stake is a market that will grow at a 13 per cent annual compound rate to almost US$800 billion by 2024, according to an estimate by Bloomberg Intelligence based on data from Newzoo, IDC and other sources. The winners will be those who can build virtual worlds to capitalise on the convergence of online games, social networking and AR and virtual reality.

As the metaverse drew mainstream believers, stocks that latched onto the theme prospered in 2021. Meta, the name of Facebook since late October, rallied 126 per cent over three years, while Roblox surged 54 per cent since its New York listing in March. Unlisted Epic Games raised US$1 billion from investors in April, giving it a US$28.7 billion valuation. 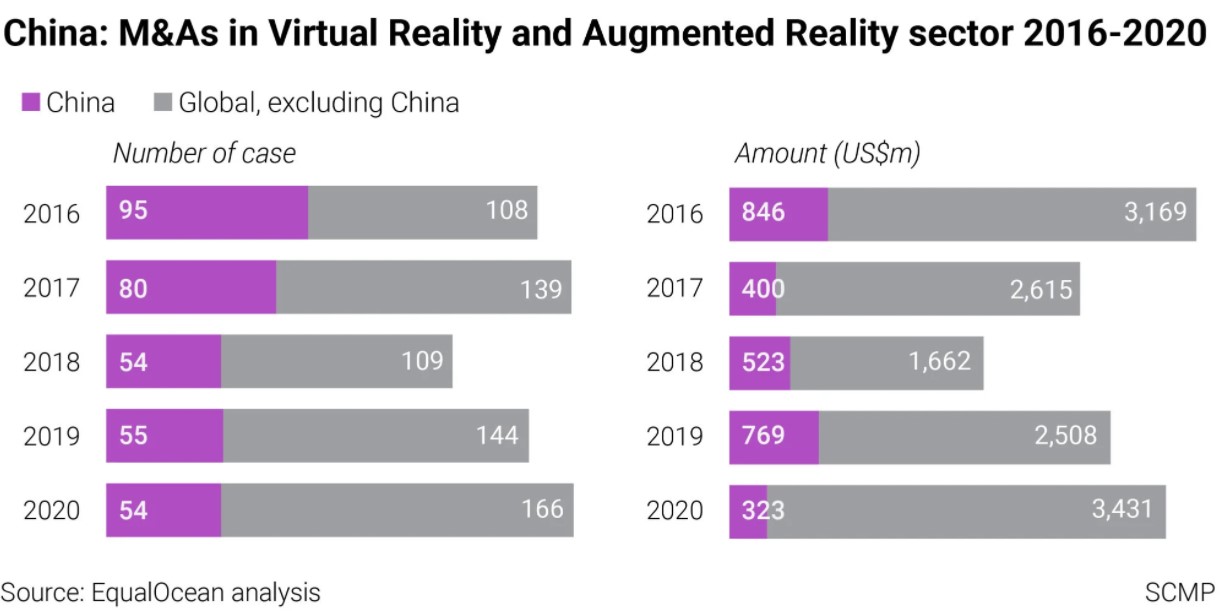 The metaverse, coined by science-fiction author Neal Stephenson in 1992 in his book Snow Crash, is often referred to as a shared, immersive three-dimensional virtual space. It gained popularity in Steven Spielberg’s 2018 blockbuster Ready Player One, which depicts a digital world where users can play, trade or simply hang out.

Online gaming platforms such as Roblox, Epic Games’s Fortnite and Minecraft enable the creation of these virtual shared spaces. Meta Platforms opened its VR product, Horizon Worlds, in the US and Canada. In China, Baidu has launched its first metaverse product, known as Land of Hope. Beijing-based Inmyshow Digital is testing virtual property sales on its metaverse platform Honnverse.

Ma’s basket of six metaverse-linked stocks fell by 11 per cent on average in the past six months, partly driven by adverse regulatory actions. ZTE is the cheapest, at a price-earnings multiple of 21.6 times current earnings, while the priciest is Shanghai Athub at 78 times, according to Bloomberg data.

Tencent, holding the biggest collection of game developers, is valued at 26 times. The company has a partnership with Roblox in mainland China, while rival NetEase has a venture with Minecraft. Meta Platforms trades at about 24 times.

Ma could not be reached for comment on his stock picks, as phone calls to his office went unanswered.

In his recent November 1 report, he said the next generation of the internet represents a huge market. The US$10 billion investment push by Meta Platforms last year “will lead to a series of investment opportunities,” he added.

Some investors are still cautious, saying the metaverse is still at a very early stage and will take years to grow. China’s recent history with data security and tightening oversight of internet-platform companies, suggests much of the development will be strictly controlled.

“If you ask anyone what is the metaverse, you will probably get different answers,” said Hyde Chen, head of investment strategy at Haitong International Asset Management in Hong Kong. “You don’t have a really clear business model yet. We don’t have any specific recommendations regarding metaverse.”

Exponential growth in the “digital holographic world,” one that is detached from the real world and lacking in regulation, is an alarming trend, according to Wang Yongli, a former vice-president at Bank of China. Metaverse-related regulation will be needed, he wrote in Caixin Global in September.

Momentum, though, is favouring tech companies for now.

Some 78 per cent of Chinese consumers aged 14-50 are interested in socialising within online-game worlds, versus 57 per cent in the US, and 47 per cent in Japan and the UK, according to Bloomberg, citing data published by Newzoo. Among the interested groups, 82 per cent are positive about potential metaverse benefits, higher than those surveyed in the US, UK and Japan.

He had 18 buy calls on various stocks at Essence Securities, which generated a 0.2 per cent gain on a six-month basis, compared with a 0.2 per cent peer-average loss, according to Bloomberg data.

Germany between the US and China