China is due to publish key economic growth data for the past quarter that may look stable on first glance, yet should give clues about the pain that lies ahead as stiff Covid controls hinder consumption and disrupt production.

The statistics bureau will publish first-quarter gross domestic product figures Monday as well as monthly activity indicators for March. The latter will be closely watched to assess the damage of China’s Covid Zero approach, which has led authorities to lock down millions of people in Shanghai, Shenzhen and other cities, cut factory output and snarled supply chains.

The State Council, China’s cabinet, has promised more monetary and fiscal support, although the central bank didn’t cut policy interest rates on Friday as expected and has yet to boost stimulus by lowering the reserve requirement ratio.

Economists surveyed by Bloomberg predict GDP likely rose 4.3% in the first quarter from a year earlier, up from 4% in the previous three months. On a quarter-on-quarter basis, a better measure of economic momentum, growth likely slowed to 0.7% from 1.6% in the fourth quarter.

Monthly data for production, consumption and property investment probably weakened across the board in March, reversing the trend of official data in January-February, which beat expectations. Infrastructure investment was likely a rare bright spot last month as local governments accelerated bond sales to fund projects.

To better gauge China’s economic performance in the first quarter of 2022, here’s a guide to what to watch for in the data: 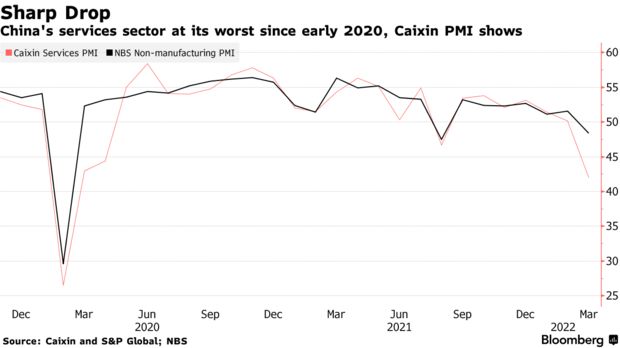 Retail sales likely fell 3% in March from a year ago, according to the median forecast of economists in a Bloomberg survey, the first contraction since July 2020. The comparison base last year was high, while the negative impact from the ongoing Covid wave has shown “no clear signs of abating soon,” Nomura Holdings Inc. analysts including Lu Ting wrote in a note.

In another sign of disruptions caused by the lockdowns, China’s imports unexpectedly fell in March, with purchases of edible vegetable oils and meat posting the steepest declines in the first quarter compared to a year earlier.

Growth in fixed-asset investment is predicted to slow to 8.4% year-on-year in the first three months of 2022, according to the survey, after jumping 12.2% in January-February.

The weak real-estate market probably remained a drag. A slump in housing sales deepened in March even though more cities eased home-buying rules, with sales in the top 50 cities tumbling for a third straight month. The growth in property development investment is seen dwindling to 1.2% in January-March, the lowest since what was logged for the first six months of 2020. 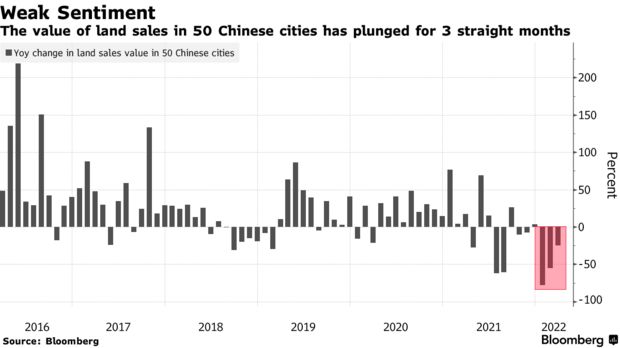 Infrastructure investment is expected to be robust as the effects of fiscal stimulus kick in, analysts at Goldman Sachs Group Inc. and Citigroup Inc. wrote in notes last week. Nomura analysts, however, cautioned that the Covid outbreak may have caused some construction projects to halt, slowing investment.

Some 1.25 trillion yuan ($196 billion) of special local government bonds were sold by the end of March, Deputy Finance Minister Xu Hongcai said this week, equivalent to 34% of the quota for this year. The use of the funds raised was accelerated, with more than 852 billion yuan having been passed over to entities undertaking relevant projects, he added.

Industrial production likely eased in the month as factories in pandemic-stricken areas were shuttered, workers were confined to their homes and supply chains were disrupted because of congestion at ports.

Major technology and manufacturing hub Shenzhen and auto manufacturing base Jilin province were locked down last month, while mass testing was carried out in the city of Dongguan, a key city for the production of shoes, toys and textiles. Businesses said they faced difficulty buying raw materials, or suffered extended delivery times due to virus control measures. 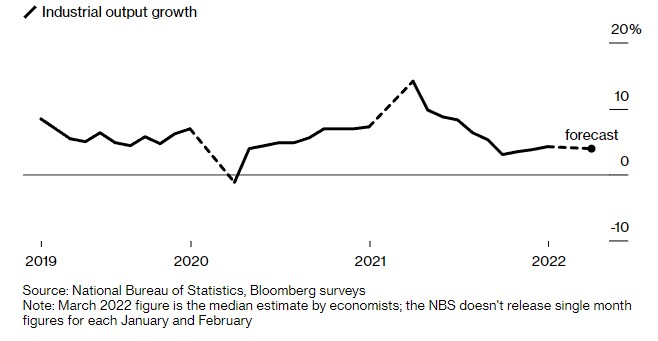 While the Covid damage to factories was less severe than for consumption, economists still expect factory output growth to weaken to 4.0% in March from 7.5% in the first two months of the year. A sub-index of the official purchasing managers’ index survey showed output contracted in March for the first time since last November, when a delta virus outbreak set off by a cluster in Nanjing hit the economy.

The growth outlook hinges largely on how quickly China can bring the outbreaks under control and how much Beijing is willing to sacrifice its economic growth to defend the Covid Zero policy. While authorities have recently dialed up the rhetoric on adding fiscal and monetary stimulus to support growth, a lack of demand from businesses to expand and consumers to spend will likely make the policies less effective than planned.

Economists expect growth to slow to 5% this year, below the government’s target of around 5.5%. Some banks, like Barclays Plc and Goldman Sachs predict growth will weaken to as low as 4.5%.

US lawmakers visit Taiwan to pacify DPP after Pelosi’s farce

Opinion: Threats from US Treasury Secretary against China arrogant, irresponsible

How can Didi Global and 200 other mainland Chinese companies…