China’s exports unexpectedly expanded at a faster clip in August, shrugging off the impact of a global resurgence of the coronavirus pandemic, port congestion and supply bottlenecks.

China’s outbound shipments rose 25.6% in August from a year earlier, higher than the 19.3% increase in July, the General Administration of Customs said Tuesday. The result also comfortably topped the 17% increase expected by economists polled by The Wall Street Journal.

Shipments to each of China’s major trading partners increased at a faster year-over-year pace in August than in the prior month, according to calculations based on the official data. Exports to the European Union, China’s No. 2 trading partner, jumped 29.4% in August from a year earlier, accelerating from July’s 17.2% rise, while shipments to the Association of Southeast Asian Nations and the U.S.—China’s No. 1 and No. 3 trading partners, respectively—rose by 16.6% and 15.5%.

Economists had predicted China’s exports to slow in August as a flare-up of cases linked to the Delta variant of the coronavirus spread to more than half of China’s provinces and prompted government authorities to take stringent measures that hit both supply and demand.

Chinese health authorities in August shut a container terminal at the major export hub of Ningbo-Zhoushan, on China’s east coast, after one Covid-19 case was found at the port.

Ningbo is the world’s third-largest container port and a big gateway for Chinese exports such as furniture, home goods and automotive parts headed to markets in the U.S. and Europe. The congestion in Ningbo also spread to other ports including Shanghai and Hong Kong as operators scrambled shipping routes and diverted ships away from Ningbo. 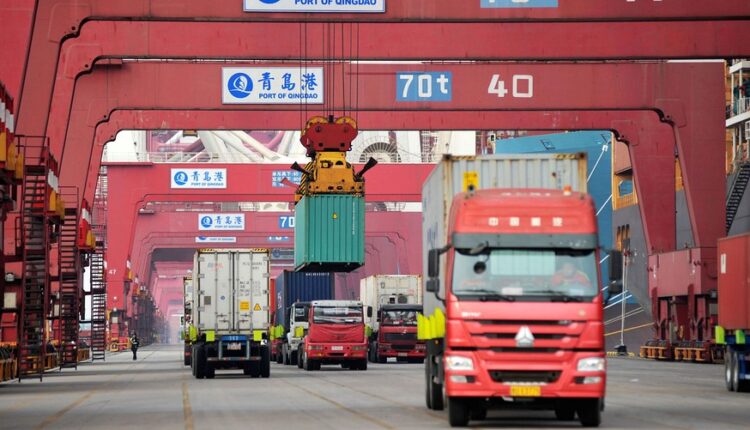 Goldman Sachs economists said the impact of the Covid-induced port disruptions may have been overestimated, with lockdowns relatively limited and trade volume successfully redirected to nearby ports.

Tuesday’s data, however, showed that demand for other categories of Chinese-made consumer goods, such as household appliances, furniture and clothing, has helped to fill the gap; export growth in all three categories accelerated last month.

Meanwhile, overseas shipments of some high-tech products—such as semiconductors—continued to outpace other major export categories, though cellphone shipments have weakened.

The reported surge in exports, however, isn’t necessarily an unadulterated good for China’s export sector.

Economists said some of the unexpected export strength was likely due to customers in advanced economies frontloading their purchases ahead of the Christmas shopping season, amid rising uncertainties about global logistics bottlenecks.

After months of expanding faster than its pre-virus pace, and with the gradual unwinding of seasonal boosts, China’s trade machine will likely turn in less dazzling numbers in the coming quarters, said Sheana Yue, a Singapore-based economist at Capital Economics.

Meanwhile, official data released Tuesday pointed to a strong increase of imports in August. Imports jumped 33.1% from a year earlier, accelerating from July’s 28.1% growth and beating economists’ anticipation for a 25.7% increase. That put China’s trade surplus at $58.34 billion in August, higher than $56.6 billion in July.

Since the second half of August, China has successfully brought down the daily number of reported symptomatic Covid-19 infections into the single digits, though the latest wave of cases damped consumer spending and service activity. Economists widely expect Beijing to step up its supporting measures, including monetary easing and more fiscal spending, to buoy domestic demand.

Xpeng’s unveils smart robot pony for children, taking it a step closer to its vision of the future of mobility