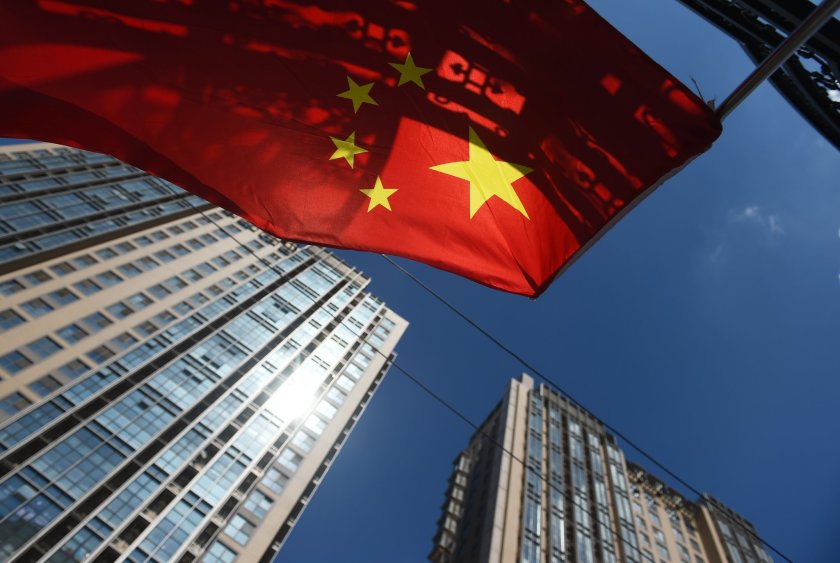 China is counting the cost of a multiple whammy of hits to its economy, from a crackdown on the property market and an energy crunch to stringent virus controls and soaring commodity prices.

The cumulative impact will show in gross domestic product for the third quarter due on Monday, with growth forecast to slow to 5% from 7.9% in the previous three months. Further illustrating that picture will be monthly industrial and investment data the same day, revealing the severity of electricity shortages last month. 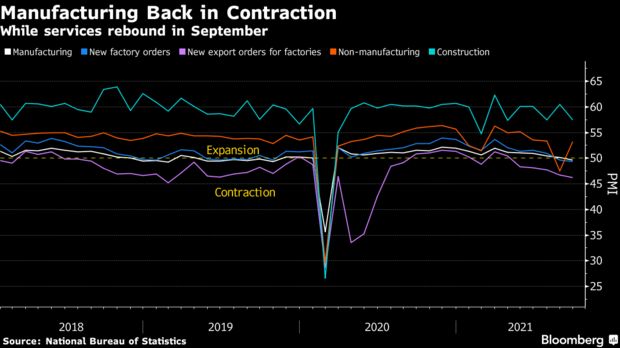 China’s slowdown will ripple across Asia and the rest of the world, knocking commodity markets like steel and iron ore that are reliant on the country’s construction activity.

With Beijing tightening its grip on the property market as part of a broader effort to tackle financial risks, real-estate sales and prices are already falling.

Meanwhile, a power shortage last month curbed factory production, pushing the purchasing managers index down enough to signal a manufacturing contraction for the first time since the pandemic started – even if frontloaded export orders for Christmas could have offset some of that.

Beijing will likely still meet its modest full-year growth target of more than 6%, meaning authorities may be in no rush to pump in stimulus. The People’s Bank of China refrained from injecting liquidity into the financial system on Friday, while asking lenders to keep credit to the real estate sector “stable and orderly.”

Premier Li Keqiang sounded a confident note in a speech on Oct. 14, saying China has “risen up to the challenges” including severe flooding and a complex international environment.

“Growth leveled off a little bit” in the third quarter, he said. “But for the whole year, we have the confidence and the ability to meet our overall development targets.”

“China’s GDP data are likely to confirm a sharp deceleration in growth in the third quarter, as a confluence of shocks – delta variant outbreaks, an acute energy shortage and regulatory tightening – batter the economy.”

Elsewhere, Turkey may cut interest rates while Russia raises them, a new reading of U.K. inflation may keep focus on the Bank of England’s possible response, and the Federal Reserve will release its Beige Book.

Aside from Chinese economic data, Japan is likely to be a focus as its general election campaign kicks off Monday with a policy debate among party leaders seeking to stop what looks like an inevitable victory for new Prime Minister Fumio Kishida.

Japanese exports figures out Wednesday should offer the latest gauge of how the global trade recovery is holding up amid supply chain bottlenecks. Inflation figures on Friday are likely to show the first price growth in Japan in 18 months, and a much stronger upward trend fueled by energy prices.

Also on Friday, Reserve Bank of Australia Governor Philip Lowe speaks on a panel about central bank mandates amid talk of a possible review of the RBA’s. Indonesia’s central bank is likely to keep interest rates on hold when it meets on Tuesday.

In the U.S., traders await the latest data on industrial production, manufacturing and housing to judge the state of the economy.

For Fed watchers, the central bank’s Beige Book is due out on Wednesday and will provide a snapshot of businesses across the country.

U.K. inflation on Wednesday is likely to have kept to the fastest pace in almost nine years in September, with a reading of 3.2% anticipated. Investors having piled on bets in recent weeks for imminent Bank of England tightening, so these data will be one of the most-watched reports in the region.

Elsewhere, the coming days present a final window for European Central Bank policy makers to speak out on the future of stimulus before a pre-decision quiet period. Executive Board members Fabio Panetta and Philip Lane, along with Governing Council member Olli Rehn, are among officials scheduled to share their views.

In the Nordic countries, Riksbank Governor Stefan Ingves and Deputy Governor Martin Floden will speak in Sweden’s Parliament on Wednesday, while Norway’s sovereign wealth fund — the world’s biggest — will release third-quarter results the next day.

Interest-rate decisions will dominate the economic news from around the rest of the wider region, with seven due this week.

The highlights include Turkey, whose central bank will hold its first meeting on Thursday since President Recep Tayyip Erdogan sacked three policy makers who were wary of cutting rates, driving the lira to record lows. That sets the stage for the bank to maintain its easing cycle after a surprise cut at its last decision, despite runaway inflation.

Meanwhile on Friday, economists predict Russia’s central bank will raise its interest rate by a quarter-point amid no letup in inflation, though expectations are rising that policy makers could go even further, with a half-point move.
Here’s a quick summary of the other monetary decisions due in the region:

Hungary’s central bank is poised to raise interest rates for a fifth month but resist pressure to accelerate tightening. That’s on Tuesday.

The Mauritius central bank will likely leave its benchmark rate at an all-time low of 1.85% on Wednesday to support growth in the tourism-dependent nation.

Also Wednesday, Namibia is expected to keep its key interest rate unchanged to aid the recovery.

Ukraine’s central bank, the same day, will reveal how it plans to address persistent inflation against the backdrop of plans to keep borrowing costs unchanged this year.

Botswana’s central bank may stay on hold on Thursday, reckoning that inflation now above its target band of 6% start will start moving back within range.

On Tuesday, look for data to show that Colombia’s strong June-July activity, which saw the economy return to its pre-pandemic level, continued in August. The IMF forecasts 2021 output of 7.6%, which would be the fastest since at least 1991.

Argentine President Alberto Fernandez’s government has ramped up spending before next month’s midterms. Look for the September budget results out Wednesday to push the year-to-date deficit well above 500 billion pesos.

On Thursday, Mexican retail sales figures for August will likely show some bounce given a record high level of remittances in the month and sustained rises in same-store sales. In Argentina, an easing pandemic and rising mobility may sustain the June-July bump in Argentina GDP-proxy data into August.

Mexico posts mid-month inflation data on Friday, the second-to-last set of readings before Banxico’s November rate decision. Persistently elevated inflation has seen a divided central bank hike at its last three meetings to the current 4.75%. Patience may be wearing thin, though, with the board talking of “a more aggressive adjustment” to deal with the risk scenario ahead.

China Trading Apps Say They Are in Compliance With Data Rules