China’s Economy Appears to Be Stalling, Threatening to Drag Down Global Growth

Throttled by Beijing’s zero-tolerance approach to Covid-19, China’s economy is facing a spell of slower growth. Economists are toying with the term “recession” to describe it.

A recession commonly means two straight quarters of contraction, and that remains unlikely for China, many economists say. The country has many ways to ensure it posts stronger growth than the U.S. and Europe this year, including the ability to unleash heavy government spending.

But economists say that underlying conditions, worsened by Covid lockdowns in Shanghai and elsewhere, are starting to feel more akin to a recession—something China hasn’t experienced in decades.

Millions of new graduates are struggling to find a job. Business confidence has fallen. Imports have plummeted and nervous Chinese are socking away more savings.

On Saturday, purchasing manager indexes released by China’s government showed contractions in factory and service-sector activity for a second straight month in April. They fell to their lowest levels since the pandemic began in 2020.

Cement production in mid-April was less than 40% of full capacity. Shipments of smartphones dropped 18% from a year earlier in the first quarter. Excavator sales within China were down 61% in April compared with the previous year.

China’s challenges go beyond the latest lockdowns. The fallout from the war in Ukraine has pushed up costs for Chinese businesses and contributed to fading overseas demand for their exports.Regulatory crackdowns have hit high-growth sectors such as technology and education. Real estate, a primary driver of the nation’s economy, went into free fall last year as developers buckled under heavy debts and home sales slumped.

Any sustained slowdown in China will be felt globally, depriving the world economy of one of its most dependable engines when inflation and war are raising recession fears in the U.S. and Europe this year. The U.S. economy shrank at a 1.4% annual rate in the first quarter, data released last week showed.

China was projected to account for a quarter of global economic growth in the five years through 2026, according to data released by the International Monetary Fund last year.

Commodity-exporting countries like Brazil that count on Chinese demand for products such as iron ore and other metals could see demand wane. Exporters of components and machinery to China, such as Taiwan, South Korea and Japan, have already reported weaker sales after lockdowns shut Chinese factories.

Ford Motor Co. said vehicle sales in China dropped by 19% in the first quarter from a year earlier. Dallas-based chip maker Texas Instruments Inc. cut its revenue forecast for the second quarter due to reduced demand related to Covid restrictions in China.

A loosening of China’s “zero Covid” lockdowns, which have crippled cross-country supply chains and kept consumers at home as Omicron has spread this year, would likely spark a partial recovery. Caseloads in Shanghai, the worst-affected city, have fallen in recent days, though a handful of cases in Beijing have led to new restrictions there.

Unlike in 2020, when China’s economy snapped back quickly from its first bout with the pandemic, the country’s additional problems mean there’s lessening hope of a major resurgence later this year.

Li Haitao, a manager with Zhejiang Taotao Vehicles Co., based in the eastern Zhejiang province, said that Covid lockdowns have made it harder to get supplies and keep workers on site. He has also seen a 40% decline in orders for his firm’s electric scooters and dirt bikes compared with last year, due to slowing demand in Western economies. Higher prices for raw materials such as copper, steel and aluminum are eating into profit margins.

The company has cut one working day a week for each staff member, resulting in a salary cut of about a fifth for each employee, said Mr. Li. 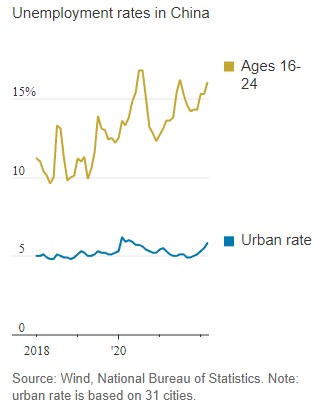 Surveyed unemployment in China’s 31 largest cities has surpassed the level it hit when Wuhan was locked down in 2020. Youth unemployment is now 16%, according to official data.

“It’s too hard for young people to find a job nowadays,” said Jessica Fan, a project manager for an internet company in China. The country’s technology giants have laid off employees en masse since Beijing launched a sweeping crackdown on them last year to ensure they followed government dictates more closely. Ms. Fan said that every time her team advertises a new position, résumés land in her mailbox “like snowfall” for weeks.

More than 10 million college students are due to graduate this year, a record for China, but a gauge of vacancies compiled by the China Institute for Employment Research at Renmin University of China and job search website Zhaopin suggests there aren’t nearly enough jobs for them all.

About a third of China’s 290 million migrant laborers haven’t returned to their cities of employment since the Lunar New Year in February amid the Covid restrictions. The number of people employed at small- and medium-size businesses has shrunk by around 30%, according to research firm J Capital Research, based on interviews with Chinese labor agencies.

Chinese stocks suffered their worst selloff in more than two years last Monday, though they recovered somewhat later in the week. A slide in China’s yuan currency rekindled memories of a heady drop in 2015 that unnerved global markets.

China’s economy is “in the worst shape in the past 30 years,” said Weijian Shan, chairman and chief executive of PAG, a Hong Kong-based private-equity firm that manages about $50 billion, in a video for investors reviewed by The Wall Street Journal.

“I also think the public discontent in China is at the highest point in the past 30 years,” added Mr. Shan, who attributed China’s current crisis to policy decisions, though he said that his firm remains confident in the long term in China’s growth and market potential. His comments were first reported by the Financial Times.

Weaker demand in China could have one positive: somewhat reduced inflation pressure for the world, if it consumes less oil and other imported goods.

Many economists say any upsides could be offset by the inflationary impact of Covid-related disruptions to China’s supply chains, which are crimping its ability to supply the world with manufactured goods. If that continues, it could contribute to the much-feared combination of anemic growth and high inflation known as stagflation.

That’s especially true for parts of Asia which trade heavily with China, contributing to a “stagflationary outlook” for the region, said Anne-Marie Gulde-Wolf, an official at the International Monetary Fund, at a conference on April 25.

In April, the IMF cut China’s full-year growth forecast to 4.4% from 4.8% earlier this year, and well below the government’s target of around 5.5% for 2022. Barclays said on April 29 that it believes China’s full-year GDP growth could dip below 4% if lockdowns extend into the second half of this year. 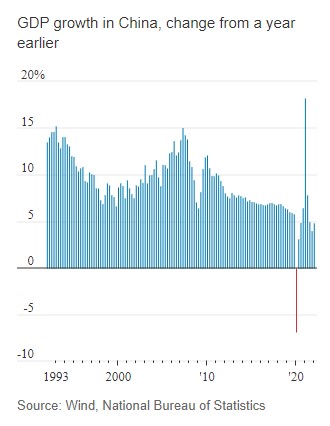 Lengthy bouts of weak growth or falling economic output are rare in China. Until 2020, it hadn’t reported a single quarter of contraction since 1992, the earliest year for which quarterly data is available.

Ting Lu, chief China economist at Nomura in Hong Kong, said he’s forecasting a small quarter-to-quarter contraction in China in the second quarter. He said if the government doesn’t modify its pandemic strategy, there’s a chance of another fall in output in the third quarter, though he added that he expects aggressive government action to mitigate that risk.

Craig Botham, chief China economist at Pantheon Macroeconomics in London, said he thinks China already experienced a fall in output in the first three months of the year on a quarter-to-quarter basis, despite official statistics showing growth of 1.3% on the same measure.

His own estimates of changes in China’s gross domestic product, which draw on official data but adjust for inflation in a different way, point to a quarter-on-quarter contraction of 1.8% in the first quarter on an annualized basis. He expects a bigger fall in output, of 2.5%, in the April to June quarter.

Many economists say China is at risk of a growth recession, a term used to describe a spell of weak expansion when the economy isn’t close to its full potential and isn’t creating many new jobs.

Such a situation is reminiscent of the jobless recoveries of the U.S. and other advanced economies after the 2008-09 financial crisis. It isn’t a label commonly stuck on China, which averaged 7.7% GDP growth in the decade through 2019.

Chinese officials are pledging to get the economy back on track, without abandoning their tough Covid-control policies.

President Xi Jinping, who is angling to stay in power for a third term at an important party conclave later this year, has called for an all out campaign to rev up growth through more infrastructure spending. Beijing has frowned on such outlays in recent years because of fears they could exacerbate China’s debt problems.

Other plans under consideration include coupons for shoppers to lift consumption and steps to rein in regulatory campaigns against the technology and real-estate industries that have slowed their growth.

The policy response from the government and central bank has disappointed many economists so far. The People’s Bank of China has trimmed banks’ reserve requirements but kept interest rates steady since January, fearful of pushing investors into looking for better returns elsewhere.

Many economists are skeptical that traditional stimulus policies will work in any case due to Covid lockdowns. Some question whether China needs much more infrastructure—and how the government will fire up construction projects while sticking with its zero-tolerance approach to Covid.

“You’ve still got the problem of actually getting the shovels in the ground if all the shovels are locked in a shed somewhere,” said Mr. Botham, of Pantheon Macroeconomics.

A real-estate agent in Guangzhou, who asked to be identified by only his surname, Mr. Du, said he has been looking for a job since November.

The 28-year-old said he used to sell properties for real-estate developers, including the beleaguered property giant Evergrande Group, which has defaulted on its international bonds.

Mr. Du said he is skeptical the market will recover soon. “For many people, their whole life’s savings is just enough for buying a house,” he said. “Now that they may stop working anytime due to lockdowns, they won’t easily put their money down.”

As US chips away at its one-China policy, fears grow for Taiwan’s uneasy peace