China’s economy remained deep in a slump in May as lockdowns continued to weigh on activity, and as the threat of omicron and expanded restrictions dampened sentiment.

That’s the outlook based on Bloomberg’s aggregate index of eight early indicators for this month. The overall gauge stayed below the mark that separates improving from deteriorating conditions for a second straight month.

China’s economy worsened in May from April 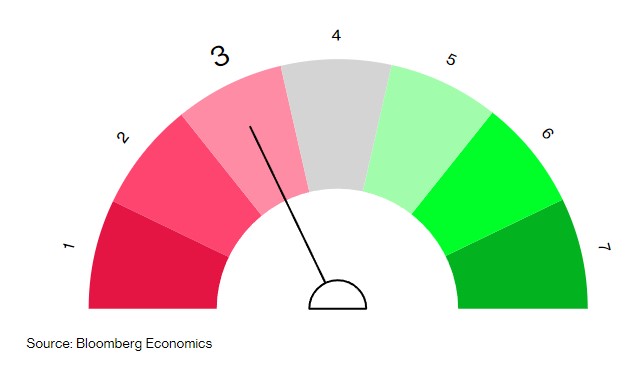 Areas affected by virus control measures have fallen to 20.5% of China’s gross domestic product, down from 35.1% at this time last month, according to estimates from Nomura Holdings Inc. But it may take longer for economic activity to fully recover from abrupt halts caused by the lockdowns, and the uncertainty from China’s Covid Zero strategy has made businesses unwilling to invest and consumers reluctant to spend.

Small business confidence dropped again in May to the second lowest level since the data series began, according to Standard Chartered Plc’s survey of more than 500 small firms. The weakness in the gauge — the worst since the early months of the pandemic — reflects the lingering effects of large-scale lockdowns despite recent progress toward reopening. Overall sentiment turned gloomier, the firm’s economists said, with a sub-index measuring expectations falling below 50 for the first time since February 2020.

Retail, accommodation, catering, and leasing and commercial services — all contact-intensive — “remained the main drag,” the economists said. They added that small- and medium-sized enterprises focused on exports “started feeling the pain,” having experienced month-on-month contractions. External demand was hit in May as the global economy adjusted to fallout from the war in Ukraine, and as China’s virus lockdowns weighed on supply chains.

While South Korean exports — a leading indicator for global trade — rose faster in the first 20 days in May than in April, figures for average daily shipments showed just a 7.6% increase, the smallest gain in preliminary data since the end of 2020. Exports to China continued to be weak, rising only much slower than shipments to Japan or the US.

Declines in home and car sales continued, though at slower paces than last month. That’s despite the government relaxing rules and cutting taxes for car purchases. To combat the housing slump, the People’s Bank of China this month cut the interest rate for new mortgages, banks lowered their key lending rate for home loans and the State Council asked local governments to support reasonable housing demand.

Small business were less confident in May 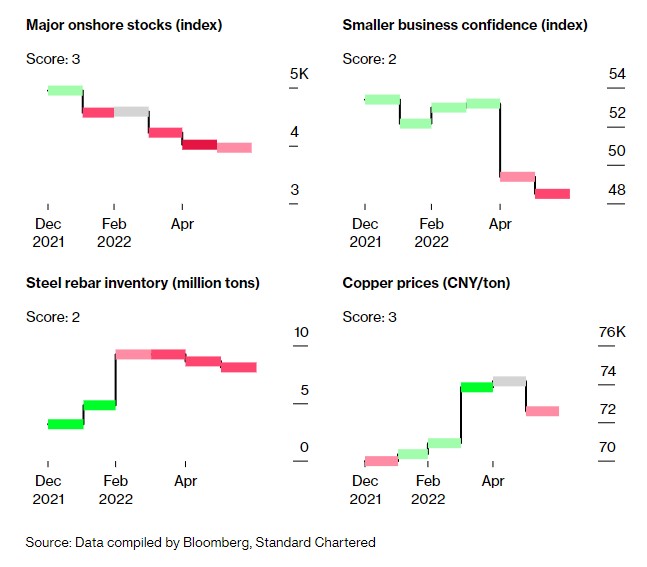 Top leaders have dialed up their rhetoric on stabilizing growth with more frequent vows to support weak links, including consumption, jobs and small businesses. This week, the State Council rolled out a broad package of support measures that included greater tax relief, more emergency loans for aviation, and a boost in bonds for railway construction.

The enhanced pledges haven’t impressed economists. Several have cut their forecasts for China’s economic growth this year, citing Covid-related restrictions as one of the top reasons. The consensus now is for gross domestic product to grow 4.5% this year, according to the median estimate in Bloomberg’s latest survey, well below the official target of about 5.5%.