China’s credit growth accelerated in January, a traditionally strong month for lending, with banks extending a record amount of loans after the central bank eased monetary policy to counter an economic slowdown.

Borrowing is usually strong in January as banks tend to step up lending at the beginning of the year to make use of the new quota. Credit growth is being keenly watched by the market this year as a sign of the effectiveness of the central bank’s efforts to encourage faster lending to counter a slowing economy.

The PBOC vowed last month to open its monetary policy tool box wider and avoid a “collapse in credit,” sending its clearest signal yet of an easing bias after cutting policy interest rates. Deputy Governor Liu Guoqiang urged banks to be proactive and look for good projects.

Most recently, the central bank has eased year-long restrictions on loans for the real-estate sector to fund public rental housing, in its latest attempt to alleviate a slump in the property market.

Loans to non-financial firms jumped in January, while lending to households was smaller than a year ago 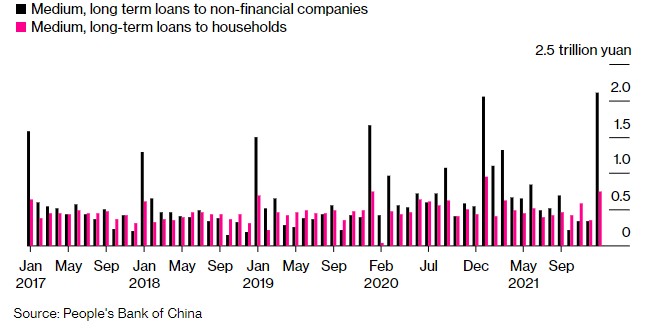 The benchmark sovereign yield extends gain after the release, edging up 2 basis points to 2.75%, the highest in more than 3 weeks. 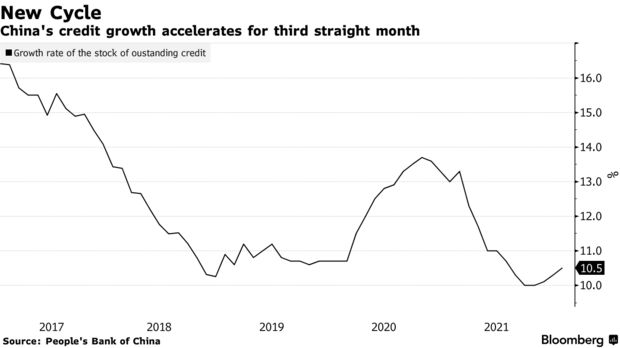 “A pickup in year-on-year credit growth reflected stimulus from the central bank and fiscal front-loading to counter downward pressure on growth. This is all part of a concerted push to counter the economy’s slowdown.”

While the PBOC no longer sets an annual loan quota for banks, they still need to report their loan extension target to the central bank, which can influence that target through so-called window guidance and macro-prudential assessments of banks, according to some economists.

There were signs that banks were scaling back loans to each other and lending more to companies and households in January, as well as indications of stabilization in borrowing for home mortgages at the end of 2021.

Local governments’ bond sales in January were also stronger than last year, as unlike in 2021 they were allowed to sell new bonds before the quota is approved by lawmakers in March.

The M1 money supply, which covers cash in circulation and demand deposits, surprisingly shrank 1.9% from a year ago. Discounting the distortion due to the Lunar New Year holiday falling earlier this year than last, the measure grew 2%, according to the PBOC. The figure could also reflect weak flows of cash from households to companies. Property sales are usually a transfer from household time deposits in M2 to corporate short-term deposits in M1, so a drop in homes sales could affect these numbers too.