Financial institutions offered 645 billion yuan ($94.9 billion) of new loans in the month, down from 3.1 trillion yuan in March, the People’s Bank of China said Friday. That was the lowest level since December 2017 and less than half the estimate of 1.5 trillion yuan.

Aggregate financing, a broad measure of credit, stood at 910 billion yuan, the worst level since February 2020 when the whole country was basically locked down to control the first outbreak of Covid-19. The stock of outstanding credit grew 10.2% to 326 trillion yuan, slower than the 10.6% expansion in March. 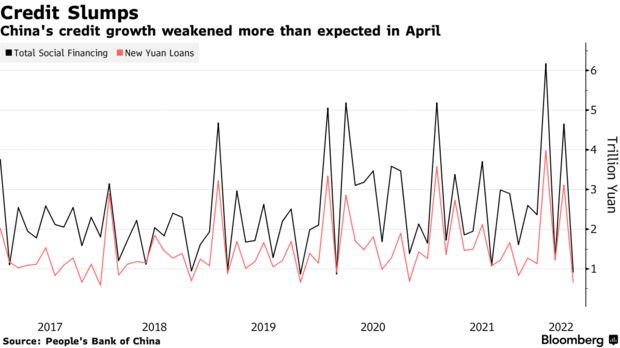 China’s economy took a heavy hit in April as authorities deployed widespread lockdown measures to contain Covid, with manufacturing and services activity, as well as export growth all slowing sharply. Credit expansion has struggled to pick up this year, even though the PBOC has made repeated calls for banks to increase lending and some financing restrictions for property developers and home buyers have been loosened.

“Even though this is monthly data, we think it represents a broader trend of decline,” said Xing Zhaopeng, senior China strategist at Australia & New Zealand Banking Group Ltd. China will need more stimulus and measures to help companies’ borrowing demand recover, he said.

The sharp slowdown in yuan loans came as the impact of the outbreak in Shanghai and elsewhere on the economy became clearer, the PBOC said in a rare statement accompanying the release. A shortage of key materials and rising productions costs is adding to the woes and companies, especially small businesses, are facing greater challenges and their “effective funding demand dropped sharply.”

“The environment faced by the Chinese economy has become more complicated, grave and uncertain due to rising challenges posed by the Covid outbreak and the Ukraine crisis,” the PBOC said.

The result shows just how strong the shock from lockdowns in Shanghai and other cities has been on the economy.

“The data reinforce our view that the People’s Bank of China will take quick action to loosen policy further to help stabilize the economy. We expect the central bank to cut its one-year medium-term lending facility rate by 10 basis points in coming days and reduce the required bank reserves again early in 3Q.”

Mortgage demand plunged in April amid a slump in property prices and home sales. Household mortgages contracted by 60.5 billion yuan, according to the PBOC, which didn’t provide data comparable with previous figures.

In March, medium and long-term household loans to households, which were a proxy for mortgages, rose 370 billion yuan after falling by 46 billion yuan in February. That was the first decline in comparable data. The PBOC didn’t release this data for April.

In a sign of weak demand, lenders also aggressively bought and sold commercial paper with each other last month. That drove the interest rate on transferring bankers’ acceptances maturing in one month to near-zero levels at the end of April.

The central bank said the debt-to-gross domestic product ratio will rise but stay in a reasonable range, as it seeks to make match the expansion of financing with the pace of nominal economic growth, according to the statement.

The PBOC also reiterated a pledge to stabilize overall credit and use various monetary policy tools to keep liquidity reasonably ample. It will make use of a reform of the deposit rate mechanism to lower banks’ funding costs, in order to cut the cost for companies to borrow money.

The growth of M2, the broadest measure of money supply, picked up to 10.5% from 9.7% in March. That shows that money supply has increased due to greater monetary and fiscal stimulus this year, but it hasn’t translated into credit growth yet, Ming Ming, chief economist at Citic Securities Co., said.

But Xing of ANZ argues that the very flush liquidity in the interbank market means “it’s not appropriate to cut the policy rates” or the reserve requirement ratio, which is amount of cash banks must hold in reserve. At the same time, there’s a greater urgency for commercial banks to lower the loan prime rate, the defacto benchmark lending rate, at the end of next week after deposit rates fell recently, he said.

How can Didi Global and 200 other mainland Chinese companies…