China’s lockdowns to contain Covid have snarled operations at the world’s largest port in Shanghai and stalled activity in major cities, affecting the supply chains of businesses from Tesla Inc. to Apple Inc.

Trade data on Monday will provide clues to the extent of the damage. Chinese export growth likely slowed to its weakest pace since June 2020, while imports probably contracted for a second month, a sign of weak consumer spending as millions of residents in Shanghai and elsewhere were confined to their homes. 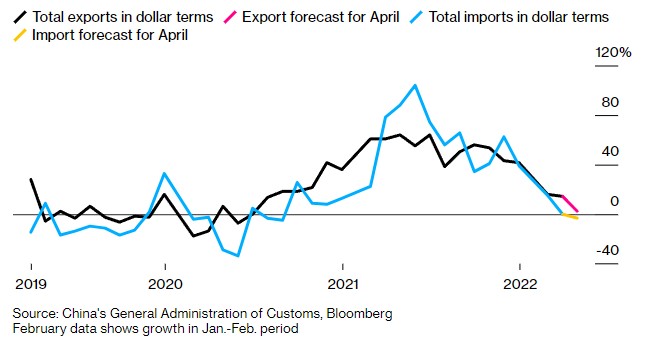 As manufacturer to the world, the disruptions in China are weighing on the global economy and add another risk to the inflation picture. In Shanghai, where most of the population have been under some form of lockdown for more than five weeks, the government is trying to get production back on track. Yet many foreign businesses say they’re still unable to resume operations.

Early indicators for trade aren’t promising. South Korean exports, a barometer of worldwide demand, grew by double digits in April, yet shipments to China dropped, suggesting China’s slowdown is a product of its own Covid restrictions.

“Disruptions to production and deliveries may adversely impact shipments. The output and delivery components in April’s official PMI data deteriorated to the worst levels since the nationwide lockdown in early 2020.”

By the Asia Economists Team.

China’s inflation data will also be in focus as shortages of food and other goods, also triggered by lockdowns, drive up costs. Consumer price growth is forecast to accelerate, while factory gate inflation likely remained elevated in April.

The Communist Party’s top leaders have pledged more stimulus to meet an economic growth target of about 5.5% this year. Credit data for April due this week will show whether monetary and fiscal support have had the desired effect of stoking borrowing.

Meanwhile, Chinese Premier Li Keqiang warned of a “complicated and grave” employment situation. He instructed all government departments and regions to prioritize measures aimed at helping businesses retain jobs and weather the current difficulties, according to a statement late Saturday.

Outside of China, Asia’s highlights include a rate decision on Wednesday in Malaysia, where officials are likely to buck the global tightening trend as inflation remains tame and downside risks for the economy remain.

After the Reserve Bank of India’s surprise hike, April inflation data will be scrutinized on Thursday as economists reassess their policy forecasts.

Indonesia and the Philippines post first quarter GDP data on Monday and Thursday. In Japan, wages and household spending data will be released early in the week.

The April consumer price index report on Wednesday is the highlight of an otherwise quiet week for economic releases. Inflation is projected to have moderated on both a monthly and annual basis, partly reflecting a dip in gasoline prices that have since picked back up.

While inflation likely peaked in March at 8.5%, the hottest in four decades, price pressures are expected to remain elevated, keeping Federal Reserve officials on track to steadily lift borrowing costs in the months ahead. 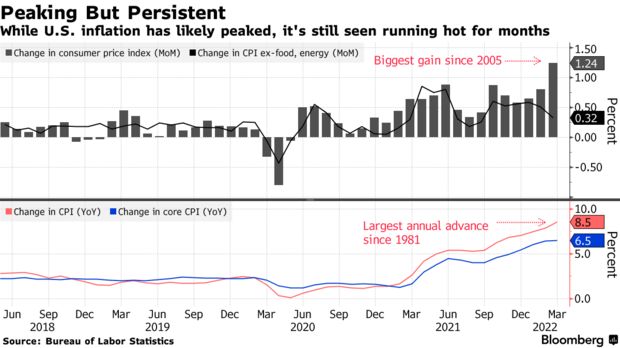 After the Fed’s half-point increase in the benchmark rate on Wednesday, investors will be monitoring a slew of speeches by central bankers, including John Williams, Christopher Waller, Thomas Barkin and Loretta Mester.

A U.S. measure of prices paid to producers in April is slated for release Thursday and is expected to show some moderation in the pace of wholesale inflation. The week closes out with a reading of consumer sentiment from the University of Michigan.

Economists forecast a respectable 1% increase in U.K. GDP for the first quarter, though that may mask a period with no growth at all in March.

Those data on Thursday will illustrate the backdrop to an outlook that the Bank of England says is turning starkly sour, with double-digit inflation likely to crush any expansion toward the end of the year.

The BOE has underestimated the U.K. inflation spike this year 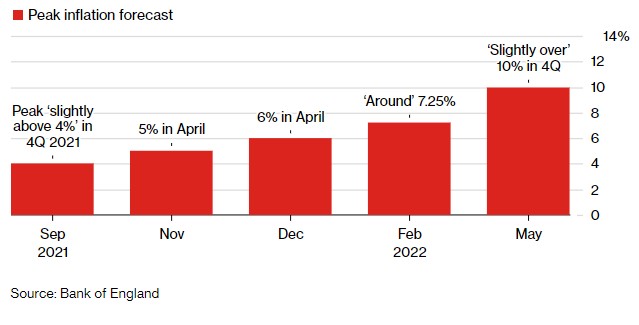 The BOE revealed that scenario on Thursday as it delivered a fourth consecutive rate increase. One perspective on that may emerge on Monday as policy maker Michael Saunders delivers a speech in London.

Germany’s ZEW gauge of investor expectations on Tuesday is forecast by economists to have dropped further in April from a level that was already the worst since the pandemic erupted in 2020.

Among inflation reports due this week, the Czech Republic’s on Tuesday may draw attention, potentially reaching a new high above 13% for April.

Russia’s will be yet higher though. Economists anticipate inflation there may have exceeded 18%, a dramatic surge in the space of just two months — effectively doubling since the invasion of Ukraine. The central bank predicts further price surges.

Other reports include Russian trade data on Wednesday, pointing to the impact of sanctions on imports and exports in March, and car sales figures from April.

In Ghana, data on Wednesday is expected to show inflation accelerated further from almost 20% in March, which was the highest rate in more than a decade.

The country’s central bank meets later this month, with economists predicting it could raise rates by as much as 200 basis points.

Mexico on Monday posts both full-month and bi-weekly consumer price data for April ahead of the central bank’s rate decision later in the week. Early estimates see the annual readings leveling off near two-decade highs for both the core and headline results.

With inflation now more than twice the 3% target, most analysts expect Banxico on Thursday to raise the key rate to 7% with a fourth straight half-point hike and eighth straight increase overall. A consensus is building around 8.5% as a likely year-end level for the key rate. 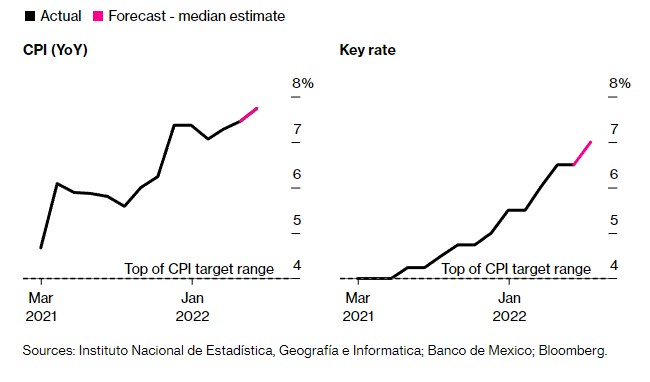 In Brazil, look for April’s annual consumer-price reading on Wednesday to vault past 12%, more than three times the target. After raising its key rate to 12.75% on May 4, the central bank signaled that an 11th straight rate hike is likely for next month.

Look for Argentina’s monthly consumer prices to have cooled off after March’s 6.7% jump, even as the annual pace pushed past 56%. Many local economists see that hitting 60% by year-end. 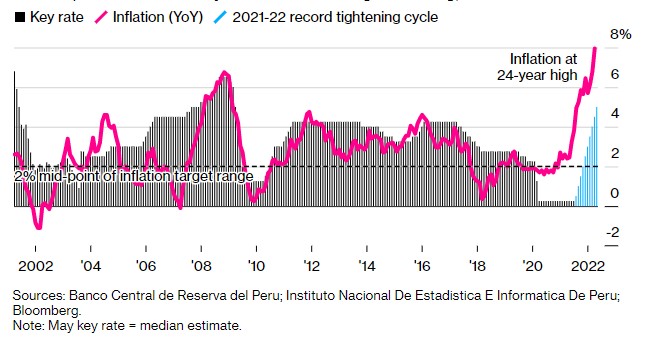 In Peru, the central bank — battling the fastest inflation in two decades — is expected to extend a record tightening cycle and raise the key rate to 5%. As with regional peers, the bank’s not done yet.

Tencent Expands to UK With Establishment of Liverpool Studio

JD.com opens robotic shops in the Netherlands as Chinese…