Covid-19 cases in China jumped to a three-month high, with almost half of the 1,993 infections reported nationally for Wednesday coming from Hainan island where tourists had thronged in search of respite.

Sanya, a beach resort town in Hainan, saw infections triple in a day to 1,254 for Wednesday. It’s the first time the daily number of cases in any Chinese province or city has exceeded 1,000 since May, when an outbreak shut down Shanghai for two months.

The fast-growing infection rate casts doubt on the Hainan government’s goal of achieving zero community transmission by Friday. Almost the entire island is locked down, with National Health Commission officials saying the virus appears to have been silently spreading for some time. 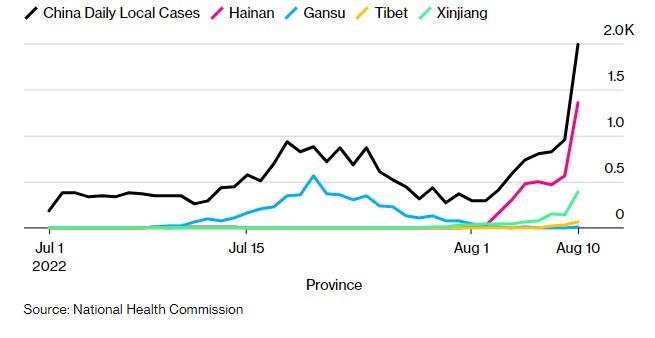 People in Sanya are struggling to get basic necessities like food, just like those in Shanghai did months ago, as online grocery apps lack enough delivery capacity to meet demand. Free food packages from the government are far from enough to sustain every family, local residents said.

Among the stranded foreign tourists, there’s a sense of confusion and shock as they wait on updates from hotel management, and the rules from the government on when or how they can leave keep changing. Facilities like pools and gyms have been closed, though people are not confined to their rooms.

Meanwhile, Sanya officials stepped up control measures on Thursday, asking workers to strictly enforce stay-at-home orders for those in high risk areas, with residents in lower risk areas only allowed to go out to pick up essentials. People have started to organize among themselves to procure fresh vegetables and meat within the community.

Xie Ying, a 31-year-old school teacher in Sanya, is joining as many WeChat groups for bulk purchases as possible to help her parents after their residential compound reported a few Covid cases. The housing complex hasn’t gotten assistance from the government in ensuring food supplies, and online grocery delivery slots are harder to get in high-risk compounds.

She’s worried that restrictions will be put in place for the group buying programs as rumors are spreading that the sudden surge in cases is related to the shared parcels.

“I feel the city is in a mess now,” she said. “We can only pray good luck for ourselves to live in a neighborhood with fewer cases.”

Xie is hopeful that Sanya’s smaller size will be a benefit, particularly after watching the lockdown residents of Shanghai endured.

“Sanya is such a small city, so I still believe it’ll control the virus much better than Shanghai,” she said, pointing to the normal availability of medical services, with “green channels” set up for emergency needs. “I think the Sanya government has learned some lessons from Shanghai and prepared more for the lockdown.”

For visitors, however, leaving won’t resolve the problems. One concern is that cities like Shanghai and Beijing have changed their quarantine rules for those returning from Sanya, ramping up centralized quarantine requirements which will further delay them from reaching home.

Hainan authorities said last Saturday that 25,000 tourists were stranded in Sanya but chartered flights have been arranged to help them leave. Almost 1,000 have departed since Tuesday, authorities said. It’s not clear how many remain.

Xinjiang and Tibet, two other popular tourist destinations, have also seen their infections almost triple in a day, with 395 cases reported for Xinjiang and 68 for Tibet on Wednesday.

NHC officials warned about the high transmission risks and limited resources available to fight the outbreak in rural areas. Tibet has built three field hospitals within days, and a team of health experts from Beijing has been deployed to provide guidance.

Xinjiang is also home to the world’s biggest producers of polysilicon, the key material in solar panels. Prices for the ultra-refined metal have already soared to a 10-year high as manufacturing capacity has been unable to keep up with soaring demand for clean energy. So far, producers haven’t reported any Covid-related operational issues, Daiwa Capital Markets analyst Dennis Ip said, although Xinte Energy Co. has set up a closed-loop system for employees to avoid disruptions.

The outbreaks have coincided with peak travel season, leaving tens of thousands of tourists stranded each time a popular destination imposes restrictions. Beihai in Guangxi province saw 20,000 visitors stranded at one point in July, while more than 80,000 tourists in Hainan were trapped last week before authorities helped to arrange their departure from the island. Tourists in Xinjiang are also being assisted so they can leave in an orderly manner, authorities said.

Chinese people keep ear to the ground during Russia-US…