The monetary policy committee held a meeting on Friday that was chaired by Governor Yi Gang. The central bank also reiterated its aim to promote the property sector’s “healthy” growth and protect home buyers’ rights, as well as work to better meet housing demand.

The PBOC has so far taken a restrained approach to monetary stimulus but expectations are growing that it will do more in the new year, especially if property market problems and slowing private consumption continue. With many global central banks including the Federal Reserve looking to tighten policy or already raising rates, further monetary easing from the PBOC would widen that divergence and could start to put pressure on the currency.

The PBOC allowed banks to lower the benchmark lending rate by five basis points earlier this month, after unleashing 1.2 trillion yuan ($188 billion) of money by cutting the amount of funds banks are required to keep in reserve. It also reduced the interest rate for the re-lending program for small businesses, with credit growth picking up in November after slowing for almost a year. 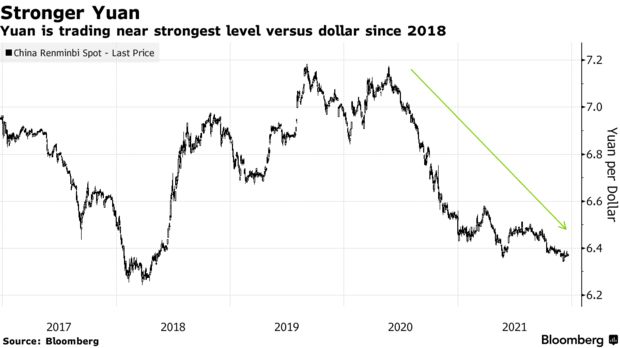 The central bank on Saturday said it will implement re-lending programs that support small businesses and companies in reducing emissions. It will also guide banks to offer greater support to high-tech firms, small companies and private enterprises as well as green projects. The PBOC said it will also encourage lenders to increase loans to the manufacturing sector.

Analysts expect more easing to come next year, including further cuts to the reserve requirement ratio and potentially a reduction in policy interest rates, as the ongoing property slowdown likely continues to drag on growth next year. Authorities also signaled more fiscal support in early 2022 to drive investment and infrastructure building.

NEVs to take over 30 pct share of China auto market in 2025: think tank

China’s Policy Pivot Has Traders Wondering How Far It Will…