China’s central bank gave lenders a modest cash boost on Friday and refrained from cutting interest rates, taking a cautious approach with monetary easing despite the worst Covid outbreak in two years taking a toll on the economy.

The People’s Bank of China reduced the reserve requirement ratio for most banks by 25 basis points, lower than economists had expected, and dropped it by 50 basis points for smaller banks. It kept the one-year policy interest rate unchanged, disappointing the majority of economists who predicted a cut.

The modest action indicates restraint from the central bank in the face of interest rate hikes in the U.S. and elsewhere and rising inflation risks. It also suggests monetary policy easing may have limited effect in boosting growth when most of the pressures are coming from China’s tough approach to combating Covid infections.

“The main challenge the economy faces is the omicron outbreaks and the lockdown policies that restrict mobility,” said Zhang Zhiwei, chief economist at Pinpoint Asset Management. “More liquidity may help on the margin, but it doesn’t address the root of the problem.”

The yield on the 10-year government bond rose 1 basis point to 2.77% after the announcement.

The RRR cut was signaled by the State Council, China’s cabinet, at a meeting on Wednesday, and followed repeated warnings from top officials about risks to growth and the need for more monetary and fiscal stimulus. Economists have been downgrading their growth forecasts for the year to well below the government’s target of around 5.5%.

The RRR change is effective on April 25 and will unleash about 530 billion yuan ($83 billion) of long-term liquidity into the economy, the central bank said. The PBOC last reduced the ratio in December.

The cut “was clearly done begrudgingly,” said Craig Botham, chief China economist at Pantheon Macroeconomics Ltd., in a note. The 25-basis point is the smallest monthly drop in the RRR on record, he said.

Earlier Friday, the PBOC refrained from cutting interest rates and injecting extra liquidity into the economy via the medium-term lending facility. At the same time, authorities urged commercial lenders on Friday to lower their deposit rates, according to people familiar with the matter, a move to help ease funding costs for banks so they can boost lending.

“This may hint that the central bank will take smaller steps in RRR cuts from now on – 25 bps move each time would be the major magnitude in the future. Behind this, we think it’s the PBOC’s intention of preserving policy room, as the officials previously commented that the RRR has been much lower than before.”

Loan demand remains weak amid lockdown measures and a property market slump, and banks are unwilling to lend in an increasingly risky environment, Botham said. That means any rate cut will only have “minimal effect on economic growth,” he said.

A hawkish Fed is also narrowing policy space for the PBOC. Tighter monetary policy in the U.S. has already wiped out China’s yield premium over U.S. Treasuries, fueling capital outflows and threatening the yuan. 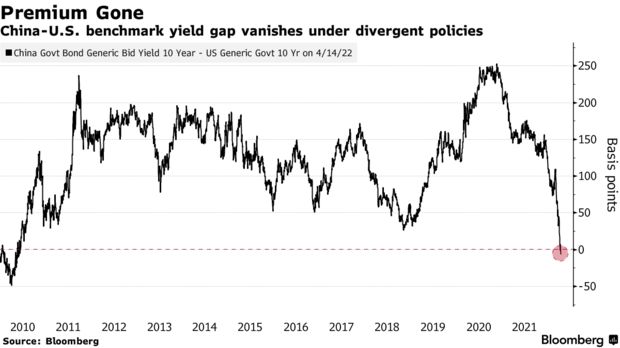 The central bank said the RRR cut will help to expand the source of long-term funds for banks, guide them to actively use the fresh liquidity to support industries and small businesses hit hard by the pandemic, and reduce overall borrowing costs.

The weighted average ratio for banks will drop to 8.1% after the reduction, the PBOC said in a statement, down from 8.4% previously.

The PBOC will continue to implement a prudent monetary policy and avoid flooding the economy with stimulus, it said. It reiterated it will make better use of aggregate and structural policies and match the expansion of money supply with nominal economic growth.

The central bank said liquidity is already at a reasonably ample level. It will closely watch the changes in inflation trends to ensure stable prices, while also monitoring monetary policy changes in major economies, it said.

Cutting the RRR is an effective way to unleash cheap long-term liquidity. With local governments speeding up infrastructure bond sales, the cash boost may help banks to finance the surge in the debt supply.

The room for further RRR reductions may be shrinking though. Economists say the central bank may soon need to shift away from widespread use of the RRR as it’s already relatively low and is becoming a less effective tool to deal with the economy’s structural challenges.

“The PBOC will use more structural policies to provide targeted support to the economy and weak links,” said Bruce Pang, head of macro and strategy research at China Renaissance Securities Hong Kong Ltd. “This is because the market doesn’t lack liquidity — it’s still ample — but the channels to let liquidity flow to the real economy, especially regarding challenges of financing to small business.”

U.S. Should Welcome a Compromise on Chinese Stocks

China conducts military drills around Taiwan in response to U.S.