In its latest quarterly monetary policy report published Friday, the People’s Bank of China (PBOC) removed a few key phrases cited in previous reports in its policy outlook, including sticking with “normal monetary policy.” That suggests a shift in stance toward more supportive monetary policy, according to economists at Citigroup Inc., Nomura Holdings Inc. and Goldman Sachs Group Inc.

The report also dropped the phrase to “control the valve on money supply,” which suggests a stepped-up monetary easing, according to Macquarie Group Ltd.’s Larry Hu. The omission of the expression that the PBOC won’t “flood the economy with stimulus” also sets the stage for more decisive monetary and credit easing, Nomura’s Lu Ting wrote in a Sunday note. 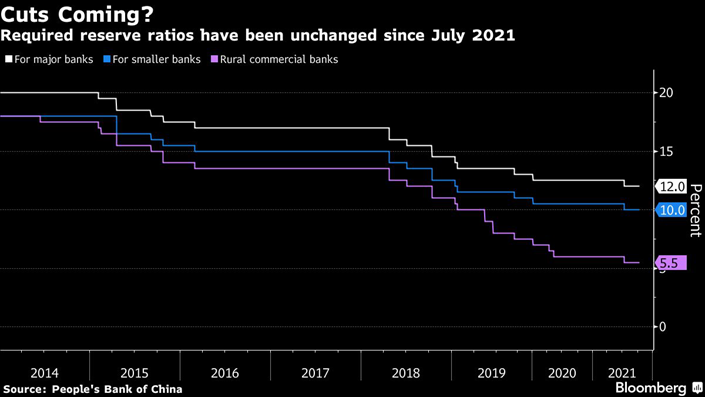 Any easing steps would likely be targeted toward small businesses and green finance, according to economists, similar to measures the PBOC has already taken in recent weeks, including 200 billion yuan ($31 billion) of financing for coal projects announced last week. The central bank is also likely to guide credit growth to accelerate next year, according to Guotai Junan Holdings Ltd. analysts led by Qin Han.

Goldman Sachs’ Hui Shan and colleagues said policy interest rates would likely remain unchanged, while Nomura’s Lu said the chance of a reduction in the reserve requirement ratio will rise in coming months.

“We expect Beijing to soon significantly step up its monetary easing and fiscal stimulus to counteract the increasing downward pressure,” Lu said.

The PBOC reiterated it won’t use the property market to stimulate growth, adding that it will work with local governments to maintain the “stable and healthy development” of the market and protect consumers’ rights. This suggests increasing chances of marginal structural easing in the coming months, according to Tommy Xie, head of Greater China research at Oversea-Chinese Banking Corp. Ltd.

On the yuan’s exchange rate, the PBOC said it will enhance expectation management, guide small businesses to better manage risks and develop the offshore yuan market. The PBOC may gradually allow a more flexible currency, Xie said in a report Monday.

The PBOC’s quarterly report was released on the same day that Premier Li Keqiang told a seminar that China still faces “many challenges” in keeping the economy stable, although this year’s goals will likely be achieved.

Liu Shijin, who sits on the central bank’s monetary policy committee, said in an online forum Sunday that the economy could enter a period of “quasi-stagflation,” which needs close attention if it happens.