At Beijing’s behest, local governments have drawn up lists of thousands of “major projects,” which they’re being put under intense pressure to see through. Planned investment this year amounts to at least 14.8 trillion yuan ($2.3 trillion), according to a Bloomberg analysis. That’s more than double the new spending in the infrastructure package the U.S. Congress approved last year, which totals $1.1 trillion spread over five years.

Planned Value of 2022 Investment in Major Projects in Mainland China 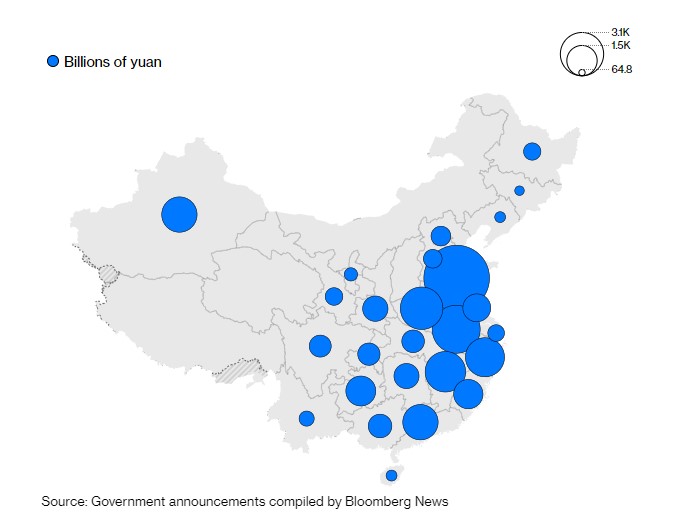 Much of the spending, like that in Washington’s plan, is aimed at transportation, water, and digital infrastructure. But China already has more than twice as much high-speed rail as the rest of the planet combined, as well as the world’s longest expressway network, so it’s shifting the composition of construction stimulus. Only about 30% of projects are traditional infrastructure, such as roads and rail. More than half are geared to support the manufacturing and service industries: factories, industrial parks, technology incubators, and even theme parks. “Now that China has basic modern infrastructure it makes sense to focus investment on manufacturing,” says Nancy Qian, professor at Kellogg School of Management at Northwestern University.

The change in emphasis reflects Beijing’s commitment to ensuring China retains its dominant share of global manufacturing, even as it shifts into more advanced areas such as electric vehicles and batteries, renewable energy, and microchips. One project that fits the bill is a 2.2 billion-yuan expansion of Beijing’s Zhongguancun Dongsheng Science and Technology Park to house a new generation of tech startups.

At the construction site, cranes surround a huge pit where foundations are being laid by workers in face masks and hard hats who started arriving a month ago. To avoid virus outbreaks, workers live in a bubble—shuttling between dormitories and the work site—and are tested weekly.

“It’s not easy to find work nowadays. I just go wherever there’s work to do,” says Zhang Hongqiang, a 49-year-old member of the construction crew, whose home is about 400 kilometers (250 miles) away in Shandong province. He earns 6,000 yuan a month, about a third of the average salary for all workers in Beijing.

Besides keeping people like Zhang employed, the construction push is meant to ensure the central government reaches its 5.5% growth target set for the year. China’s stock market, which has been battered by a regulatory crackdown on internet platform companies and a shakeout in the massive property sector, may also get a lift. The main index is down 13.4% year to date, but a subindex that tracks infrastructure-related companies is off by only 4.7%.

Like previous rounds of stimulus, this one has the potential to buoy the global economy as well, by boosting China’s imports. Yet it could also worsen commodity inflation at a time when many countries are dealing with energy price shocks made worse by Russia’s invasion of Ukraine. In the longer term—with this year’s major projects needing three to five years to be completed—the global effect may in fact be disinflationary as Chinese factories ramp up production of goods such as microchips, where tight supplies have raised prices.

There are also environmental implications, given that major projects approved by Beijing are exempt from the country’s energy-efficiency requirements. Whether China sticks with its model of construction stimulus when the economy slows is the biggest single factor determining the path of its future emissions, says Lauri Myllyvirta of the Center for Research on Energy and Clean Air. One caveat is that a chunk of new investment will be channeled into renewable energy, which would help limit the output of greenhouse gases in the longer term.

The construction drive represents a change of direction for China’s economy. The pace of infrastructure investment has fallen gradually over the past decade, guided by policies enacted by Beijing to curb high debt levels: Growth last year amounted to just 0.4%, compared with almost 20% annually a decade ago. “The trend will be reversed,” says Justin Lin, a former World Bank chief economist who’s advised Xi. Goldman Sachs Group Inc. predicts infrastructure investment will rise 8% in 2022.

With this year’s splurge, China is betting the projects won’t turn into white elephants that burden the financial system with loans that won’t be repaid. “If you use the opportunity to invest in infrastructure to ease bottlenecks, then that will increase productivity and can increase government revenue,” Lin says.

It’s a gamble that plays to the country’s economic strengths. China’s factories can pump out more than a billion tons of steel and 1.5 billion tons of cement a year while its legions of construction workers are still low-paid. State-owned construction companies, among the world’s largest, have overseen thousands of projects from Beijing to Budapest.

Politics are also working in Xi’s favor. Local Communist cadres vying for promotion at this autumn’s party congress, an event that’s held every five years, will be motivated to ensure the projects stay on track.

Western economists have long argued that China’s economy is too dependent on big-ticket public works. Those criticisms became more muted after the country’s ports and roads strained past their capacity to keep up with unprecedented export demand during the pandemic, leading to supply chain snarls that helped push up inflation in other countries.

China’s policymakers say the country still has massive infrastructure needs. It has 60 cities with more than 3 million residents but no subway system.

Beijing is trying to avoid the debt blowouts that accompanied previous rounds of investment stimulus. To do that, Xi has turned to a trusted lieutenant. He Lifeng, 67, was Xi’s economic adviser when he was the governor of Fujian province two decades ago. Now he runs the planning agency responsible for approving all major construction projects and making them happen: the National Development and Reform Commission.

For He, the professional stakes have never been higher, as he’s in the running for a major promotion at this year’s congress. Some analysts expect him to replace China’s top economic policymaker, Liu He, who may retire soon. “He’s prospects could be dented if he mishandles Beijing’s public investment push,” says Neil Thomas, a China analyst at Eurasia Group.

He laid out his priorities at a news conference in March. Investment “provides impetus for the future,” he said, ordering officials to “speed up” construction.

To get a sense of how the construction drive is taking shape, look at China’s capital. A list of 300 major projects in Beijing requiring 280 billion yuan in investment this year includes a panda breeding center, a Legoland theme park, and an electric vehicle factory operated by tech company Xiaomi Corp.

The list gives a clue about how local officials want to finance projects without increasing their debt: by asking private companies to boost investment from their own profit. China’s manufacturing sector has emerged strongly from the pandemic, and, fueled by huge government tax cuts, manufacturing investment should grow 10% this year, according to Morgan Stanley. Although Xiaomi is privately owned, having a new plant designated as a major project brings perks such as streamlined access to land and sometimes permission to build at nighttime.

Beijing is also indulging in some creative accounting, transferring trillions in savings from rainy day funds, along with assets owned by the central bank and state-owned companies, to local governments, which are technically responsible for footing the majority of the bill for projects.

Provincial governments have issued a record-breaking 1.25 trillion yuan in “special” bonds in the first quarter to finance investment. Bonds sold in February had an average maturity of more than 16 years, according to China’s finance ministry, making them less of a strain on cash flows than bank loans. “The issue in the past was that investment vehicles borrowed at a short term from banks to support long-term investment, and there was a maturity mismatch,” Lin says. “We can increase special bonds.”

There’s still a big gap between local government bond sales and the amounts of investment planned. The gap will likely be filled by China’s state-owned banks, which are able to tap the country’s giant pool of household savings at a low cost.

Beijing is turning the area around its new Daxing International Airport into a massive logistics center for e-commerce and aviation research. The project is part of a wider drive to develop the capital’s suburbs, financed with a 400 billion-yuan loan from the China Development Bank.

For Su Lijun, a food delivery driver who works near the airport, the impact on the local economy is clear. “Half a year ago there were only about a dozen of us here,” he says. “Now we are more than 100 people. We deliver 50 to 60 orders a day now, which is about twice the amount of orders we got half a year ago.”

US response to Ukraine invasion sows further doubts about…