China Warns US a ‘Dangerous Situation’ Forming Over Taiwan

China’s top diplomat again warned the US over its increased support for Taiwan, showing the island democracy remains a major sticking point between the world’s biggest economies as Beijing sent more military aircraft toward the island.

“If the US side insists on playing the Taiwan card and goes further and further down the wrong road, it will certainly lead to a dangerous situation,” Yang Jiechi, Beijing’s top diplomat, said in a phone call with National Security Advisor Jake Sullivan.

Yang said Washington should “have a clear understanding of the situation,” according to a statement posted online by his nation’s Foreign Ministry. “China will certainly take firm action to safeguard its sovereignty and security interests,” he added.

The White House issued a short statement on the Wednesday call, saying the pair “focused on regional security issues and nonproliferation.” They also discussed Russia’s war against Ukraine and specific issues in U.S.-China relations, it added.

The Yang-Sullivan call was the most high-level contact between the US and China since Joe Biden and Xi Jinping spoke in March, their first conversation following Russia’s invasion of Ukraine. Ties have remained frosty since then, with the nations sparring over Vladimir Putin, democracy in Hong Kong, forced labor allegations in Xinjiang and a range of other issues.

Meanwhile, Taiwan’s Defense Ministry said on its website that four People’s Liberation Army aircraft, including a pair of J-16 fighter jets, entered its air defense identification zone on Wednesday, skirting close to the median line of the Taiwan Strait.

China frequently lashes out at the US over its backing for Taiwan, saying it amounts to interference in its internal affairs. Xi told Biden in the March call that the issue could “have a disruptive impact on the relationship between the two countries” if it was not properly handled, and has referred to China’s quest to gain control of the democratically ruled island as a “historic mission.” 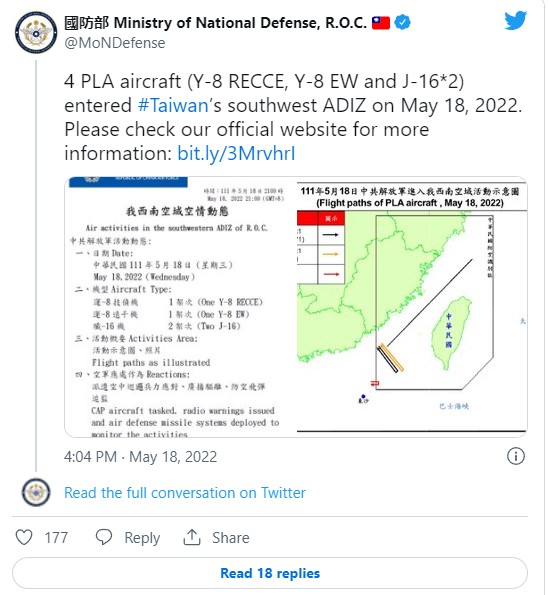 Earlier this week, Admiral Michael Gilday, the top American naval officer, said Taiwan must prepare itself against potential Chinese aggression through military deterrence that includes getting the right weapons and training. Gilday said this was the a “big lesson learned and a wakeup call” following the Russian invasion of Ukraine.

The US has stepped up its backing for Taiwan since the war in Ukraine started, with a group of senior senators including Republican Lindsey Graham visiting last month. China responded to that trip by conducting air and naval training near the island.

Last week, the State Department updated a Taiwan factsheet posted on its website, dropping a reference to not supporting the island’s independence, and describing it as “a leading democracy and a technological powerhouse.” It also said Taiwan was a key partner in the semiconductor industry and “other critical supply chains.”

On Wednesday, more than 50 senators signed a letter urging Biden to include Taiwan as a partner in the proposed Indo-Pacific Economic Framework, part of Washington’s efforts to counter China’s clout in Asia. Biden will hold a summit in Tokyo with the leaders of Japan, India and Australia as part of a trip to Asia that begins later this week.

Those four nations form a grouping known as the Quad that is largely aimed at countering China’s influence.

While the government of President Tsai Ing-wen asserts Taiwan is already a de facto independent nation in need of wider international recognition, Beijing claims it as part of its territory that must be brought under control by force if necessary.

Tsai has played down worries Russia’s invasion could trigger a similar crisis for Taiwan in the near term. One of the reasons for that is the leadership in Beijing wants domestic stability before a twice-a-decade congress this year that is likely to hand Xi a precedent-defying third term in power.

Regulators to ramp up efforts to further support listed SOEs

China video gaming crackdown: no new titles approved in May,…