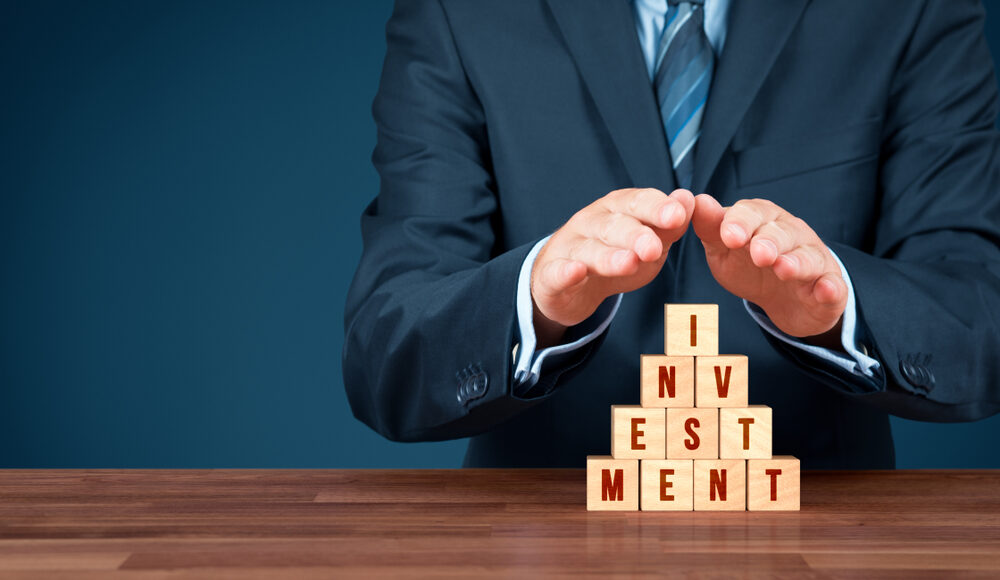 Overseas investors scaled back venture capital deals in China in August as the country’s regulatory crackdown on the tech sector prompted many to rethink their approach.

The latest figures from market research company PitchBook represent a sharp break from earlier in the year.

Chinese startups have raised USD 32.6 billion from 634 deals that included foreign VCs this year as of Aug. 25, compared with USD 18.9 billion from 453 in the first eight months of 2020. So far in August, however, just USD 800 million has been raised from 67 deals with foreign participation, down from USD 4.7 billion in July.

While several days remain in August, USD 800 million would be a new low for the pandemic period, PitchBook data shows. The previous low of USD 900 million was in January 2020, when COVID-19 first hit China and the country began a monthslong lockdown.

A wide-ranging regulatory crackdown that unfolded in July put new limits on consumer tech companies and the private education sector, and cast doubt on whether Chinese companies would be able to list overseas.

Chinese VCs have also scaled back their investments in August, but not as dramatically. The value of all deals in the country so far this month is USD 6.6 billion, down from around USD 9 billion in each of June and July.

Earlier this month, SoftBank founder Masayoshi Son said the Japanese conglomerate will halt investments in Chinese startups until the extent of Beijing’s scrutiny of the tech sector becomes clear.

“I still have very high hopes for China,” Son said on Aug 10. “But we will remain cautious until we can judge how deep and far the regulations will go… and we hope to actively resume investments when things become clearer.” 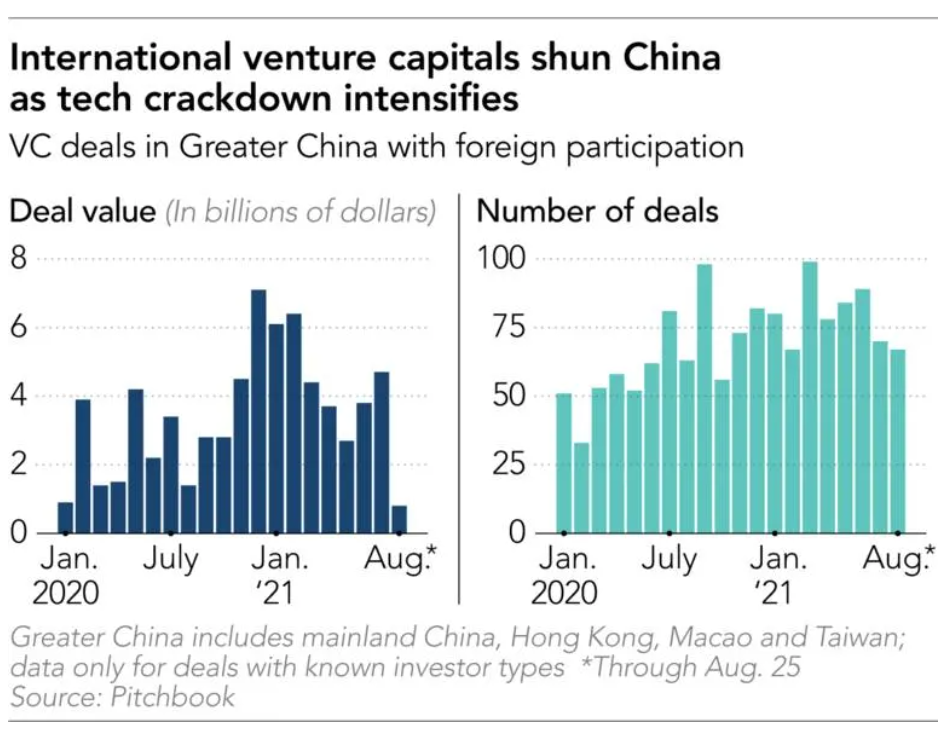 Of particular concern is how VCs will exit investments and at what valuation. China has signaled its discomfort with large tech companies going public overseas and said all companies with more than 1 million customers will have to undergo a data security review before being allowed to list on a foreign exchange. Dozens of initial public offerings in China have been halted by separate investigations into legal and financial advisers.

“It’s hard for investors outside of China to put money into Chinese companies without thinking about the inherent risk that the government could take more control, or could alter business plans of these companies,” said Brad Gastwirth, chief technology strategist at Wedbush Securities. “I think the large institutional investors will be more risk-averse and likely will not invest [in Chinese stocks], certainly not to the same degree that they did previously in Chinese companies.”

Foreign investors have been participants in about a quarter of all VC deals in China in the past three years, after activity peaked in 2018. The sharp policy actions in Beijing could alter the mix of companies attracting capital from home and abroad, investors say.

“Consumer businesses have become increasingly difficult to invest in over the past few years,” said an investor at a Chinese venture fund. “Regulatory challenges aside, it’s now almost impossible to find a good [consumer] company with decent margin and growth without overpaying for it because too much money has flown into the sector.”

“While we are not entirely surprised by the crackdown on the education sector, the speed of the change certainly served as a wake-up call for us to accelerate moving from bets on consumer deals to look at more enterprise businesses, which generally have more stable cash flow and lesser regulatory risks,” the investor noted.

Such a shift may already have been underway in the first half of the year. The hardware sector is enjoying one of the largest VC funding increases so far this year, raising a record USD 5.4 billion in the first six months, according to PitchBook data. That surpassed the total deal value in the sector for the whole of last year. 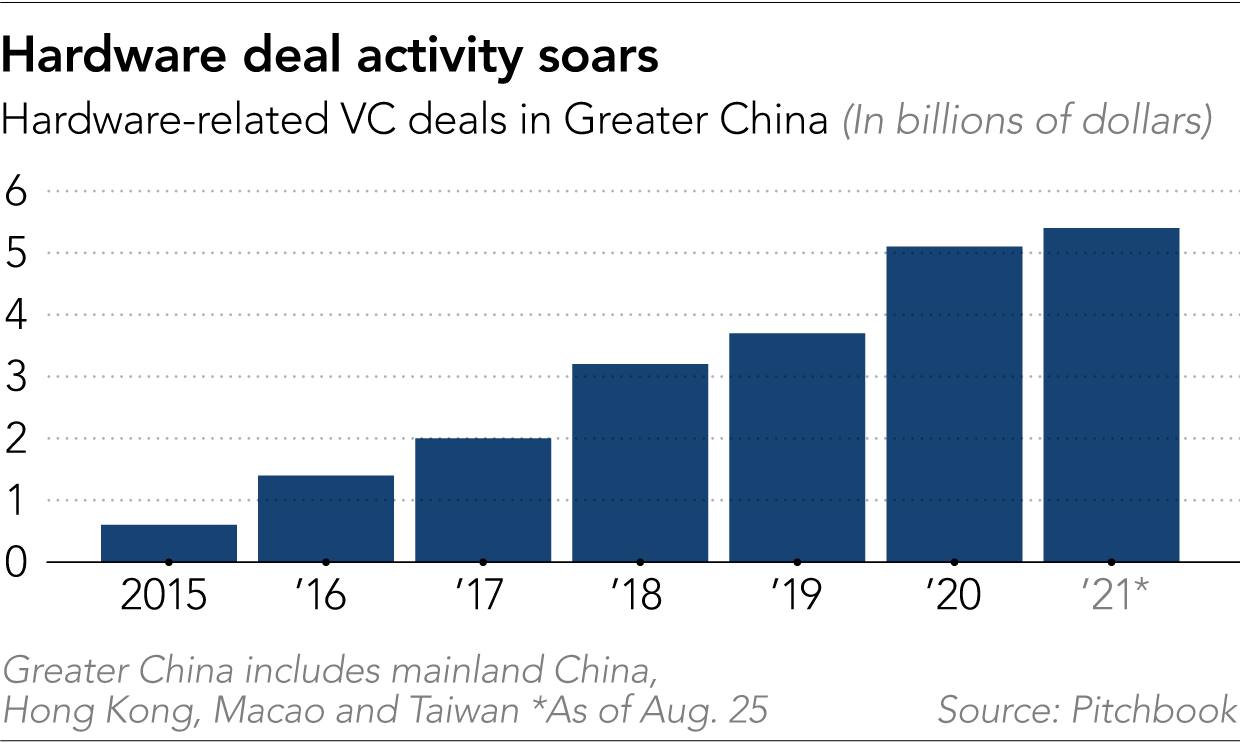 Jeffrey Lee, a partner at China-focused venture capital firm NLVC headquartered in Beijing, said robotics and manufacturing automation has been an increasingly hot sector. While more caution and strategy shifts are warranted, exiting China entirely would be out of the question, he said.

“The hard reality is that you can’t find a replacement for the sheer size of the economy, the next phase of its growth and—despite all of the criticism toward the government—the level of institutional development, whether it’s in roads or bridges, or whether it’s in the banking system,” Lee said. “It just doesn’t exist anywhere else in the world.”

VC interest in consumer-focused businesses that are bearing the brunt of Beijing’s crackdown now is also unlikely to shrivel entirely.

“Ultimately there are a lot of consumers in China, and a lot of rising middle-class consumers who are willing to spend,” said Joshua Chao, senior analyst at PitchBook. “There’s a strong reason to say that consumer businesses are still gonna do pretty well in China.”

But valuations remain a question. US-listed Chinese stocks rebounded a little last week, but they are still trading at their biggest discount to general US stocks since at least September 2016—exceeding levels seen even at the height of trade war under former US President Donald Trump.

At its worst, the Nasdaq Golden Dragon China Index, which tracks 98 Chinese companies listed in the US, halved from its peak. It is now down almost 30% year to date.

That could pull down equivalent private valuations, and there could be a further impact if companies are ultimately steered away from going public via New York’s deep capital markets, toward Shanghai, Shenzhen, or Hong Kong.

“I think there will still be a resumption of overseas IPOs, but that will probably mean, most likely Hong Kong, and not New York,” said Lee.

Hong Kong’s institutional and retail investors are less keen to back loss-making consumer companies with big long-term ambitions, he said.

“The best thing about the New York markets was that you could take a company that is generating loss but with great top-line growth and build a narrative that created a very successful public company. That is, with few exceptions, not the case in Hong Kong.”