Officials from the National Development and Reform Commission and the State Administration of Foreign Exchange told developers at a meeting in Beijing on Tuesday that they must make payments on time if possible, according to people familiar with the matter. Any developer that can’t meet its debt obligations must inform regulators immediately, the people said.

Meanwhile, Hui – who has collected more than $7 billion in dividends from the company over the last 12 years – is facing pressure to dig into own resources to ease the credit crunch at the embattled developer. His associate also pledged a house in Hong Kong as collateral for a loan.

China has clamped down on the indebted real estate sector, making it difficult for developers to refinance as they face falling home prices and sales. Multiple developers have defaulted this month, although Evergrande made a coupon payment last week.

The focus now turns to the end of a grace period on another Evergrande dollar bond later this week, with creditors bracing for an eventual debt restructuring that could rank among the largest ever in China. Evergrande’s bonds edged higher and its shares were little changed. 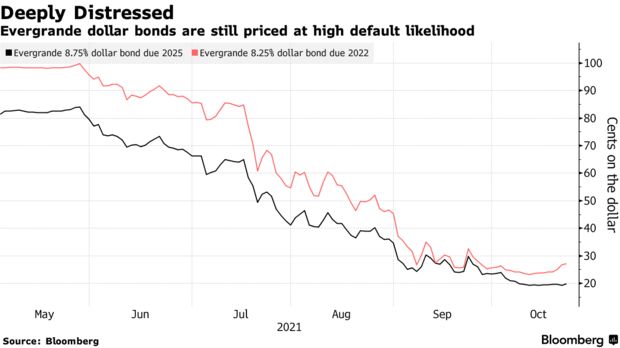 When Hui was cruising the world in a private jet, splurging on mansions and jewelry at the peak of China’s Gilded Age, his extravagant lifestyle barely stood out among the country’s burgeoning billionaire set. Now his property empire is teetering on the edge of default – and his personal fortune has landed squarely in the Chinese government’s crosshairs.

As Evergrande struggles to meet obligations to creditors, suppliers and homeowners, authorities in Beijing are urging Hui to alleviate the crisis with his own wealth. The directive came after Evergrande missed an initial Sept. 23 deadline for an interest payment on one of its dollar bonds, according to people familiar with the matter. 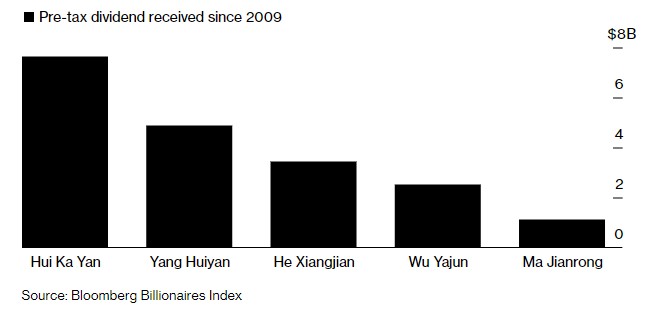 Evergrande pledged a house on the peak in Hong Kong held by Chairman Hui to China Construction Bank (Asia) as collateral for a HK$300 million ($38.6 million) loan.

The 5,000-square-foot house on Black’s Link was pledged as collateral to China Construction Bank (Asia) on Oct. 19 for a mortgage loan. The current market value of the house is about HK$700 million.

Evergrande dollar bonds were indicated higher Wednesday after founder Hui was urged by Chinese authorities to use his personal wealth to alleviate the company’s debt woes.

The developer’s 8.75 note due 2025 was indicated at 21.8 cents on the dollar in Hong Kong, on pace for the highest close since Oct. 5, according to Bloomberg-compiled data. Its 8.25% bond due in March was indicated at 26.4 cents, which would be the highest finish in a month if maintained.

Evergrande’s shares were little changed in Hong Kong after two days of declines.

Asia high-yield bond spreads are improving as Chinese authorities show willingness to act to avoid a property market collapse and Evergrande meets some of its near-term debt obligations, according to UBS Group AG.

China property has driven about 85% of the move with high quality B-rated credits outperforming, UBS analysts including Kamil Amin wrote in a note dated Tuesday, citing previous “overly pessimistic” pricing across that sector.

UBS Group Chief Executive Officer Ralph Hamers pushed back against broadening concerns over the growth outlook in China, despite recent turbulence around Evergrande and worries that government policy will hurt the wealthy.

A top Chinese regulator called on companies to make “active preparations” to meet payments on their offshore bonds.

The National Development and Reform Commission, the regulator overseeing foreign debt issuance, also called on companies to “optimize their foreign debt structure” to raise funds, according to a statement following a meeting with companies in key industries on Tuesday. The statement didn’t name companies.

Defaults on Chinese offshore bonds are at a record $8.7 billion

Why China’s Developers Have So Much Dollar Debt

With concern about Evergrande rippling through markets, a look at why Chinese real estate firms are so indebted: developers’ debt has piled up, with annual dollar-bond sales surging from $675 million in 2009 to $64.7 billion in 2020, according to data compiled by Bloomberg.

A rapid expansion of China’s property sector led to large funding needs. In addition to bank loans, developers turned to the vast pool of money in the global dollar-bond market, which was hungry for higher yields. 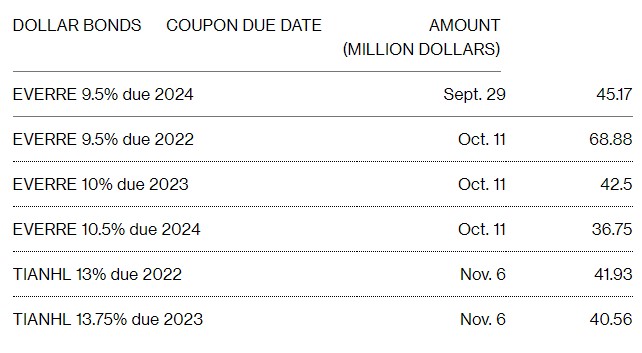