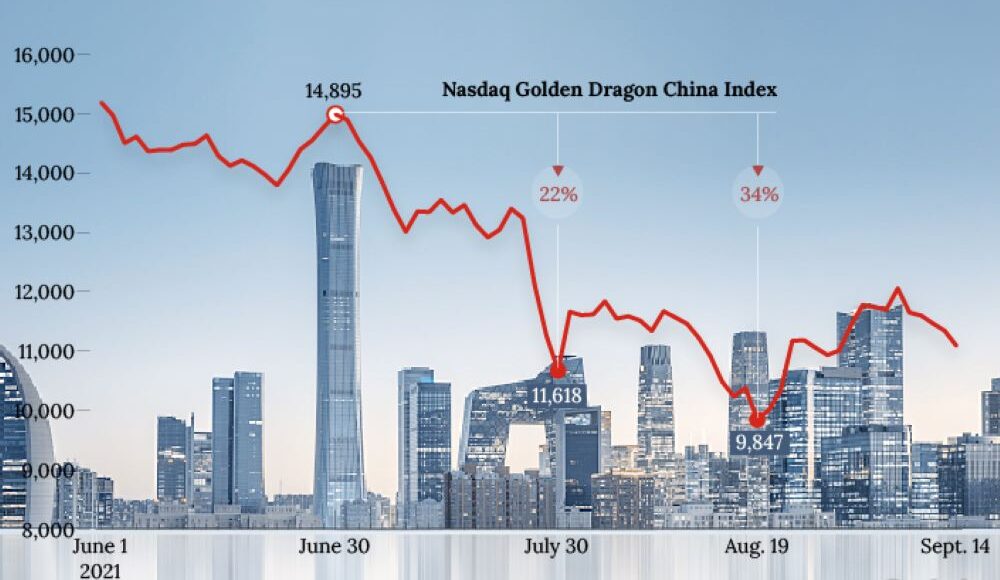 Chinese companies have just endured a summer characterized by a “storm of regulation,” leaving their share prices facing a lot more uncertainty. Volatility surged, and many investors got their fingers burnt. Some cried foul, and some called for more predictability in decision-making regarding capital market regulations.

“Policies just came out without any warning, and far exceeded expectations, be it inside or outside China,” complained one insider at a U.S.-listed Chinese company.

To quell such complaints, Vice Premier Liu He on Sept. 6 publicly asserted that China’s support for the private economy has not changed and will not change in the future. China, he declared, will let the private economy play a greater role in stabilizing growth and employment while promoting innovation.

It was the second time in less than two months that Liu spoke out (link in Chinese) to reassure the public. In late July, he said that China’s direction for development would remain unchanged, and that China would strongly encourage, support and guide the development of the non-public economy.

The market panic began at the beginning of July, when China’s cyberspace regulators placed the country’s top ride-hailing company, Didi Chuxing, under a cybersecurity review and ordered its app removed from domestic app stores, citing data breaches. Didi’s stock, which was listed in the U.S. just a few days before, tumbled more than 20% in a week’s time, and has been falling most of the time ever since.

Shortly afterward, China introduced sweeping regulations banning all after-school tutoring of core subjects during vacations and weekends for students in elementary and middle school, while barring private tutoring companies teaching core subjects from going public or raising foreign capital in an effort to turn them into nonprofit institutions.

The stock prices in the education sector collapsed immediately, and the panic quickly spread to almost all Chinese companies listed in both Hong Kong and the U.S. The Nasdaq Golden Dragon China Index, which tracks 98 Chinese companies listed on the exchange, fell more than 20% for the month of July — the worst month for Chinese stocks since the 2008 financial crisis. 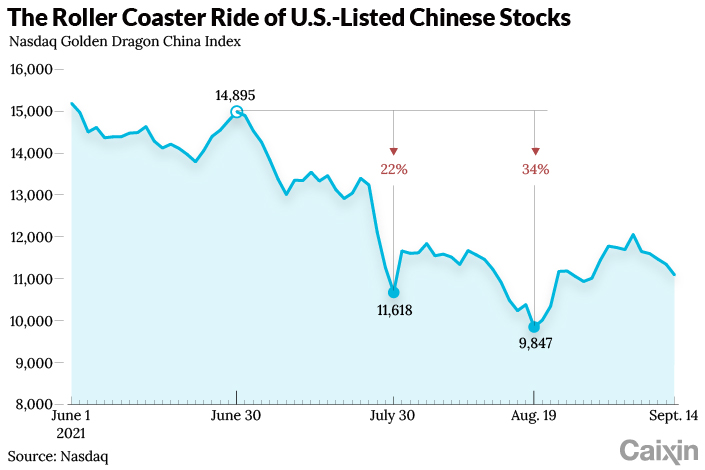 Over the years, many Chinese companies seeking to list overseas have needed to set up special structures in order to comply with Chinese laws and regulations. Privately owned companies like Didi or New Oriental Education & Technology Group Inc., a leading education and tutoring company that has been hit hard by the recent changes, use a structure called “variable interest entity” (VIE) to legally operate in China while pursuing an overseas listing. Such private enterprises have been dubbed “red chips,” in a nod to the widely used term “blue chip” for reputable big companies.

In China, the VIE structure of these red chip companies has been allowed for years because there was so much ambiguity about how they should be regulated. Contrary to what many may think, the China Securities Regulatory Commission (CSRC), under current domestic law, actually doesn’t have the power to approve or reject such red chip enterprises’ overseas listings, a source close to the regulator told Caixin.

A draft regulation released on July 10 proposed that certain Chinese companies holding the personal information of 1 million or more users would have to seek a government cybersecurity review before a foreign IPO. Given the low threshold, the de facto impact may be that in the future almost all Chinese internet companies eligible to go public in the U.S. — many of whom use a VIE structure — will be subject to the review, industry insiders said.

In late July, the U.S. Securities and Exchange Commission (SEC) stepped in. Gary Gensler, the chairman, said that Chinese companies with VIE structures should “prominently and clearly” disclose uncertainty from the Chinese government’s future actions that could significantly affect their performance. Around mid-August, Gensler said he had asked staff to “pause” IPOs of shell companies that Chinese firms use to list in the U.S.

Unnerved global investors responded to the regulatory storm in different ways. Some retreated claiming China is now effectively uninvestable; some saw a rare opportunity and bought the dips; and many others remained cautious throughout the summer, feeling it was still too early to make a decision.

Catherine Wood, head of Ark Investment Management LLC and a star Wall Street fund manager, sold nearly all her Chinese stocks by the beginning of August. At a conference in early September, she said that her fund now only holds Chinese companies that are identifiably “currying favour” with the Chinese government.

Meng Lei, a China equity strategist at UBS Investment Bank AG, a Swiss bank, cautioned that it may not yet be time to “buy the dip,” and predicated that the latest round of regulation could last until the end of this year.

Optimists begged to differ. Howard Wang from JP Morgan Asset Management Inc. recently told the press that a lot of what China had done was merely regulatory catch-up, and urged investors to focus on the long term.

Even Ray Dalio, the billionaire investor and founder of hedge fund Bridgewater Associates LP, encouraged investors in an article on July 30 to “look at the trends and not misunderstand and over-focus on the wiggles.” In his view, those who misread China’s policy direction have “missed out on what’s going on in China and probably will continue to miss out.”

The investigation into the data security practice of Didi, coupled with the SEC’s high-profile intervention, had effectively halted all the U.S. IPO plans of Chinese internet or fintech companies. “Things don’t look promising in the short term for (Chinese) companies to go IPO in the U.S.,” the source close to the CSRC told Caixin. “These days most companies are data-heavy, and data will be a core company asset in the future.”

Does a long summer of tightening regulations on a wide range of sectors indicate Chinese companies are now discouraged to list overseas?

The answer is no, said CSRC Chairman Yi Huiman, who remarked in early June that China would support domestic companies seeking to list overseas, adding that they could choose where they list based on their own needs, though he asked them to abide by local regulations and called for regulators around the world to cooperate more closely on enforcement.

As China’s tech sector gets back on its feet, look beyond internet companies

China State-Owned Giants to Delist From US Amid Audit Spat