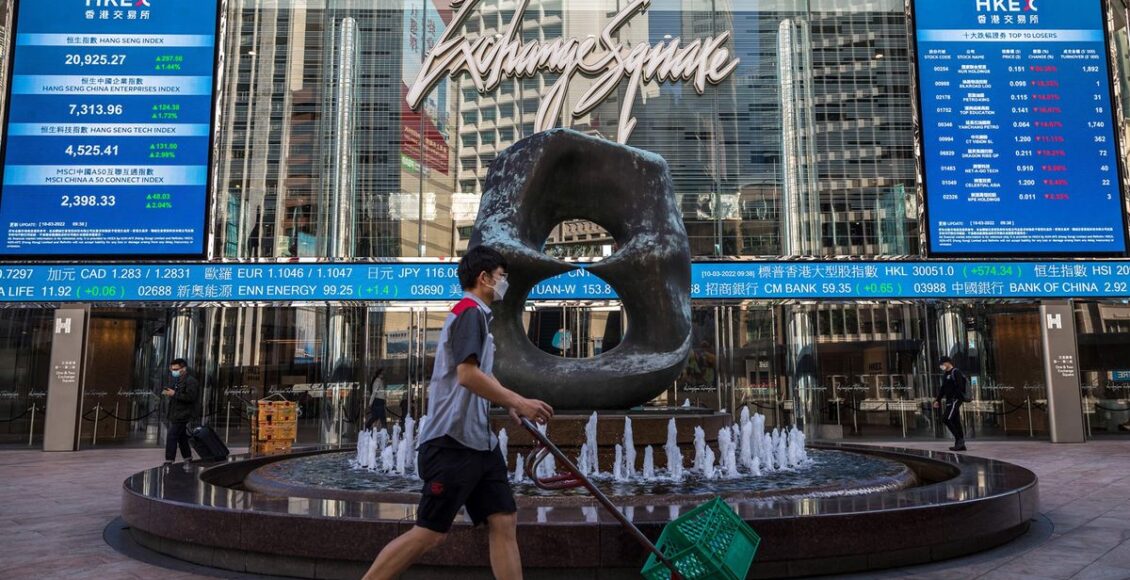 Hong Kong’s Hang Seng Tech Index plunged as much as 8.9%, on course for the biggest drop since the inception of the measure in July 2020. JD.com and Trip.com were among the worst performers. Meanwhile the benchmark Hang Seng Index slumped as much as 3.9%, on track for its worst week since March 2020.

Friday’s selloff comes as the U.S. Securities and Exchange Commission identified five Chinese firms this week that could be subject to delisting if they failed to comply with certain auditing requirements. The Nasdaq Golden Dragon China Index sank 10% overnight, its biggest slide since October 2008, even as the Chinese securities regulator said it will cooperate with the U.S.

While analysts say the risks of delisting is unlikely to materialize in the near term, the news unnerved investors already on edge following Beijing’s yearlong crackdown and the fallout from the war in Ukraine. Since its February 2021 peak, the China tech gauge has slumped more than 60%. 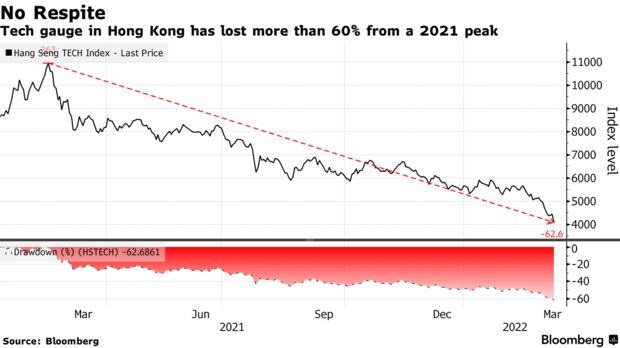 “The selloff due to renewed concerns about ADR delisting is not logical as there is nothing new in the process that was not previously announced,” said Vey-Sern Ling, a senior analyst at Union Bancaire Privee. “Sentiment in the space is very weak, but the indiscriminate selling could prove to be good opportunity for longer-term investors.”

Equity benchmarks in Hong Kong and onshore were hit with a fresh bout of volatility this week, with prices swinging sharply intraday. Beijing’s crackdown on private enterprise appeared to intensify recently after authorities asked food delivery platforms to cut fees charged to restaurants and warned of risks in investing in products linked to the metaverse.

The outlook for Hong Kong stocks took a turn for the worse this week after Norway’s sovereign wealth fund announced it was excluding Li Ning Co. due to the risk that the sportswear maker contributes to serious human rights violations in China’s Xinjiang, fueling worries about a potential retreat of other long-term investors.

“I think now people are quite concerned about the foreign funds exiting from China because we have already seen one case in Li Ning,” Alex Wong, director of asset management at Ample Capital, said on Bloomberg TV on Friday. “So that is something which is quite new to the market. And of course regulatory risks remain.”

In another blow to tech investors, Didi Global Inc. has suspended preparations for its planned Hong Kong listing after failing to appease Chinese regulators’ demands that it overhaul its systems for handling sensitive user data, according to people familiar with the matter. The ride hailing company had been one of the biggest targets of the tech crackdown last year. 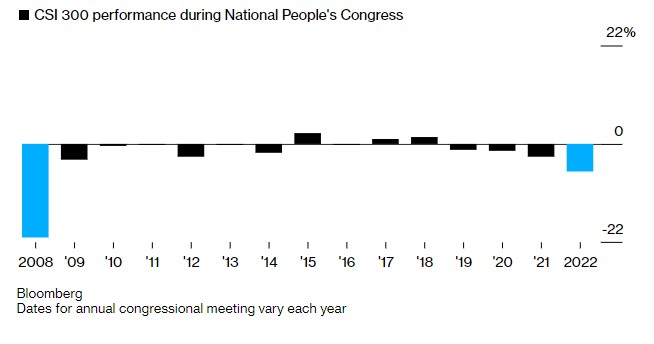 Meanwhile, China’s CSI 300 Index declined as much as 2.4%, extending losses for the week to nearly 7%. The National People’s Congress, which announced tax cuts and fiscal support to local governments to boost the economy, wrapped up on Friday. Still, performance for the equities benchmark was on track for the worst during the event since 2008.

Tencent, BYD, EV stocks slide in Hong Kong as traders focus on Fed risk before US…

China to prioritise economic stability ahead of CCP 20th…