Amazon’s stock rose 6.5% during 2021, while its closest Chinese equivalent, Alibaba, lost nearly half its market capitalization. So why is Alibaba investing more in its business than Amazon?

The American retailing and computing behemoth is worth more than five times its Chinese competitor, but by 2022 Alibaba will invest about 60% more than Amazon, according to the consensus of securities analysts polled by Bloomberg. 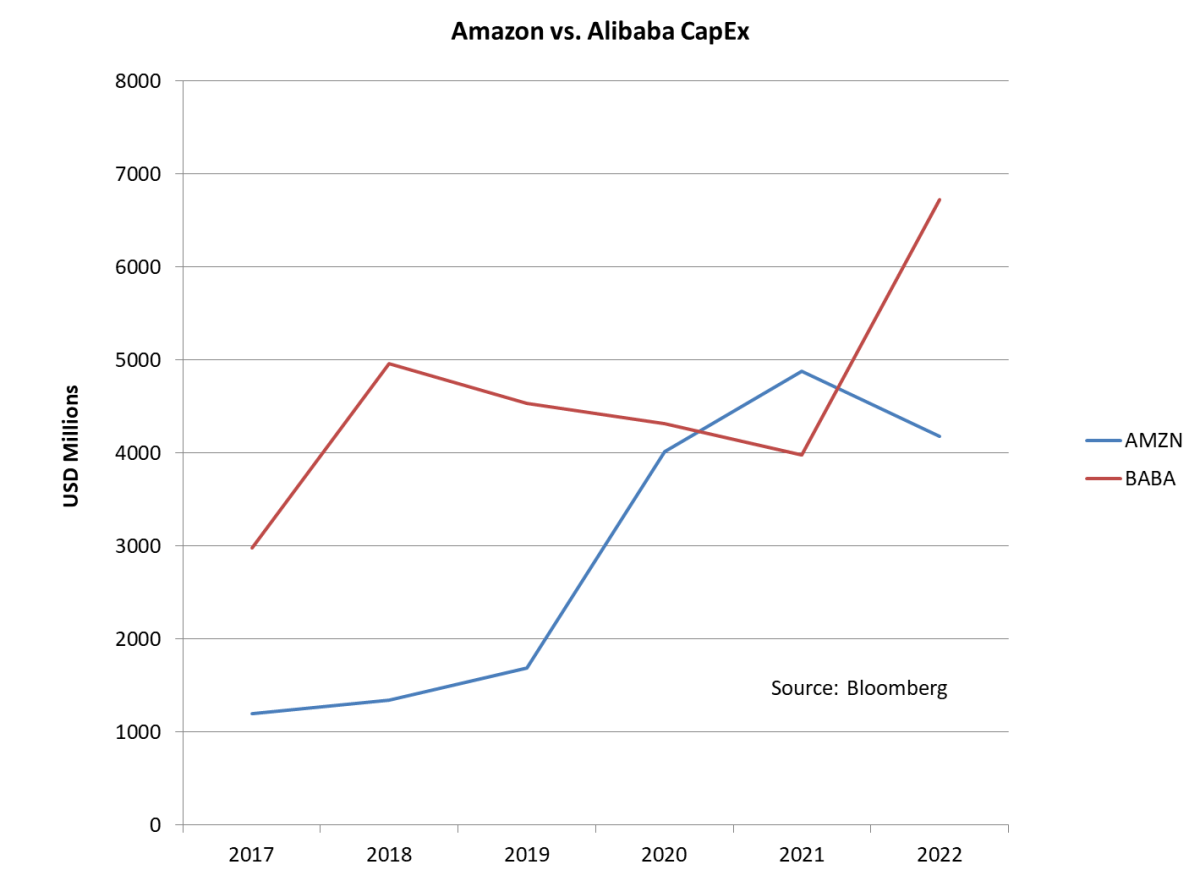 In fact, Alibaba’s CapEx is expected to double between 2018 and 2022, and Tencent, China’s other computing giant, is expected to nearly triple its capital spending. The analyst forecast for CapEx among the MSCI China Tech Top 100 companies shows a jump from $10 billion to $70 billion between 2020 and 2022.

Most of this will be financed from internal resources, according to analyst forecasts. Despite its aggressive capital investment program, Alibaba is expected to maintain strongly positive free cash flow. 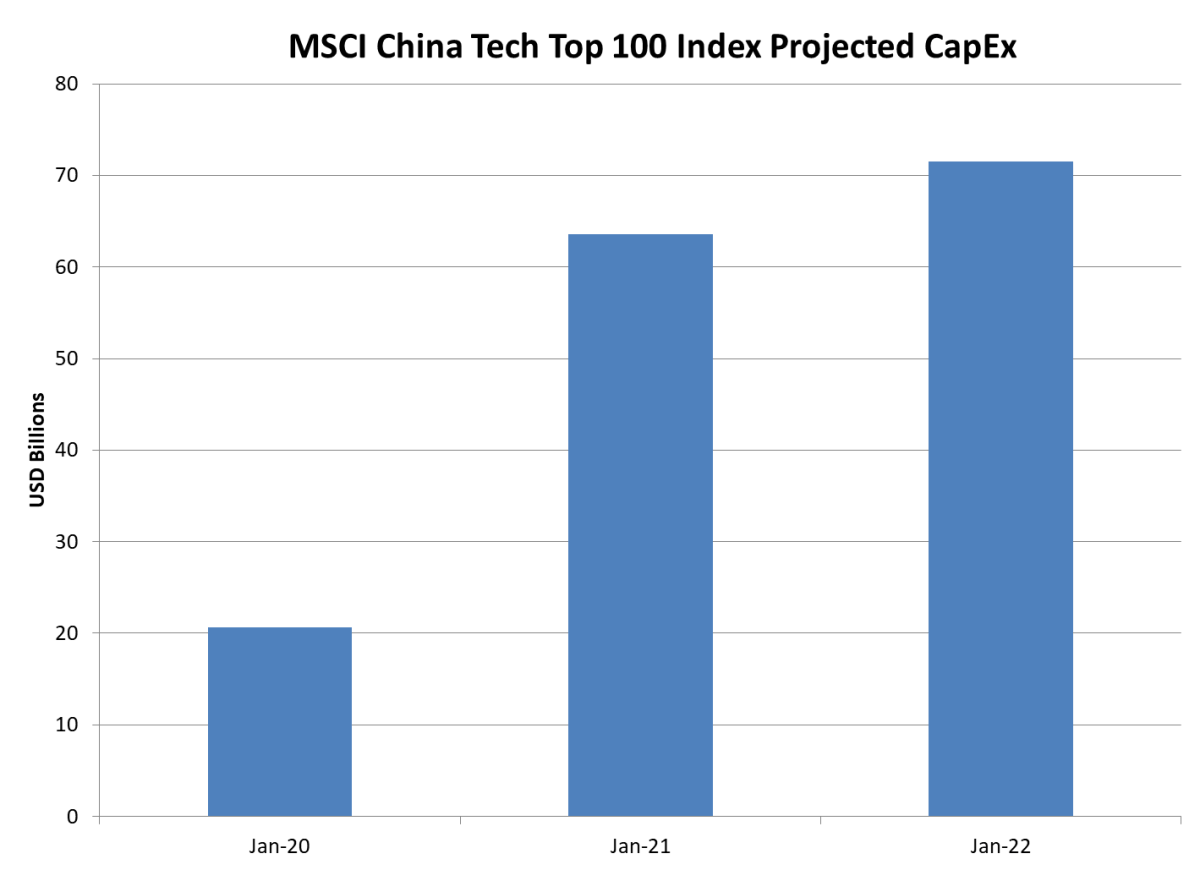 Amazon now trades at 60 times forward earnings, as compared with 13 times for Alibaba. Evidently Alibaba’s management view of the company’s prospects differs from that of equity investors, who fled the company’s stock after Chinese regulators cracked down on Ant Financial, the Alibaba’s payments and consumer credit arm, and imposed stiff fines for monopoly practices. 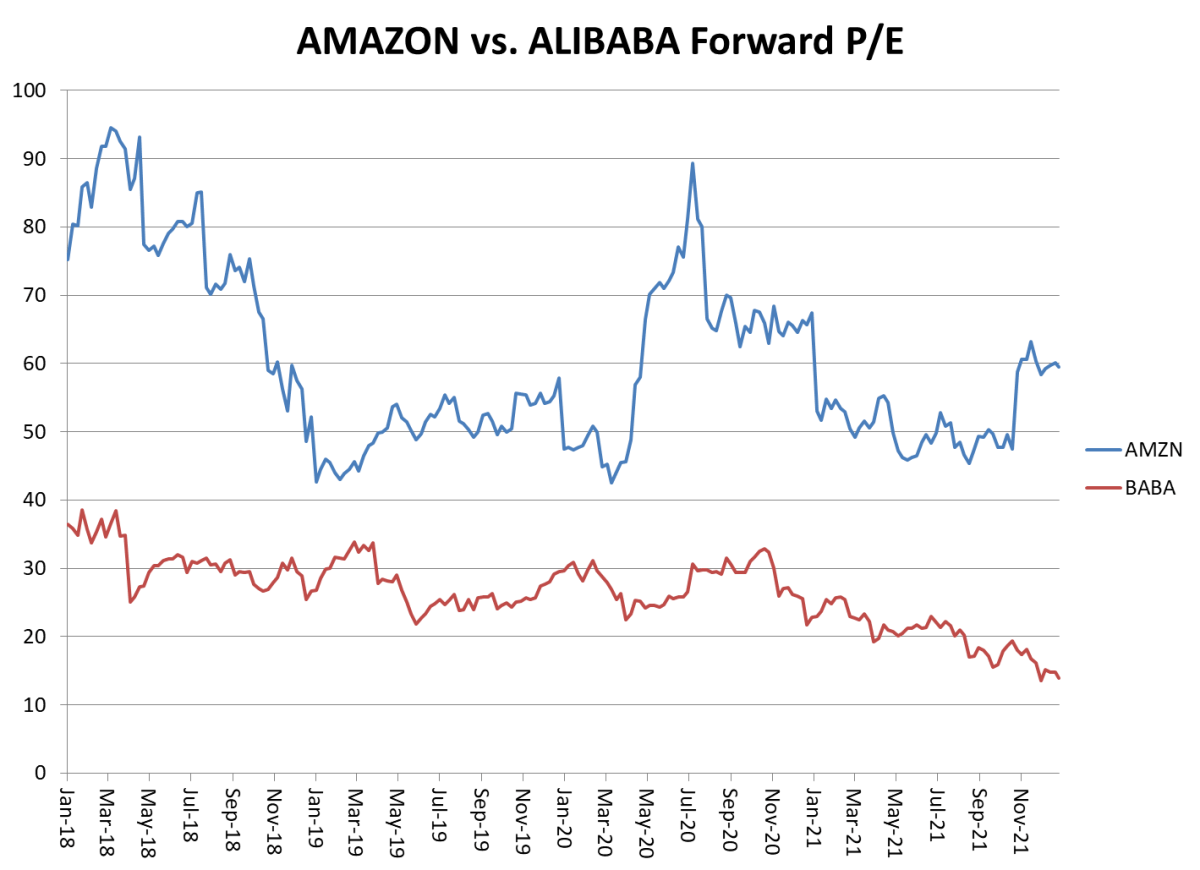 The regulatory rampage against Chinese tech companies will abate during 2022, in the view of most of the major brokerage houses, and investors will return to undervalued Chinese tech stocks. The combination of strong prospective growth and low valuations makes China’s tech sector one of Wall Street strategists’ top recommendations for 2022.

Some well-informed observers of the politics of China’s State Council argued that the regulatory reign of terror would ease after President Xi Jinping was confirmed for a third term. But it isn’t so simple.

Alibaba’s stock took a glancing blow last week when the Ministry of Industry and Information Technology suspended information-sharing with the company, after Alibaba failed to disclose risks arising from the Apache “Log4j” bug, a global concern in the cybersphere.

Tension with the United States heightens Chinese concern about network and data security, reflected in the crackdown on the ride-hailing app Didi in June 2021 just after it floated an IPO in New York. Beijing’s regulators claimed that Didi had failed to comply with data privacy and national security laws. The company’s stock traded on Dec. 30 at $5.25, less than a third of its IPO price of $16.

Sanctions on Chinese companies by US regulators have also dragged down the share prices of Chinese tech companies, although their impact is likely to be temporary.

The Chinese artificial intelligence unicorn SenseTime had planned an IPO in New York in early December, but the US Treasury put the firm on a blacklist of Chinese “military industrial complex” companies, alleging that its face-recognition software could be used to identify members of China’s Uighur minority. It took SenseTime two weeks to move its IPO to Hong Kong, where its stock jumped 23% above the IPO price in initial trading.

Tougher regulation for tech companies has an economic rationale in both countries.

As I explained in a 2021 essay for American Affairs, the flourishing of America’s information technology industry hasn’t done much for the productivity of the rest of the economy. There are strong arguments that the American tech giants suppress innovation and entrepreneurship more than they promote it. Abuses are frequent among tech companies that have achieved what economists call “natural monopolies.”

In the case of Ant Financial, whose projected record-breaking IPO was scuttled by Chinese regulators in November 2020, the Chinese government made a credible case that the company used high-tech razzle-dazzle to disguise excessive leverage and exorbitant fees.

As noted, there is also a national security dimension: Any firm whose IT systems reach into the tendrils of the economy represents a potential weak point in a cyberwar.

And there is a political dimension: The participation of 100 billionaires at the 2020 National People’s Congress rankles a supposedly egalitarian society in which most citizens have only obtained a bare minimum of prosperity. Xi Jinping’s watchword, “Common Prosperity,” opens the possibility of populist attacks on China’s ultra-rich.

China has very good reasons to restore the chastened tech sector to the good graces of the market, as the Wall Street consensus forecasts, but we may not have seen the end of regulatory shocks to the market.

But managements of China’s high-tech companies don’t appear worried about the short-term behavior of their stock prices.

The global market for e-commerce will grow by between $1 and $2 trillion between now and 2025, and Alibaba – which delivers to 190 countries – is investing in automated warehouses and smart logistics to outperform Amazon, its main global competitor. China is ahead of the United States in automating ports and warehouses, a precondition for fast global delivery.

Despite the mishap with the Ministry of Industry and Information Technology over the Apache bug, Alibaba, like Baidu and Tencent, counts on cloud computing as a growing source of revenue. Alibaba’s cloud division earned its first profit in the fourth quarter of 2020. It is still number in the world cloud market, behind Amazon and Microsoft, but its home advantage in the growing Chinese market should support growth, along with competitors like Huawei and Tencent.

Like 5G broadband, cloud computing provides infrastructure that enables small businesses to get big quickly. Rather than investing in proprietary IT departments with steep startup costs, cloud services allow growing companies to pay for the computer services they need at any point in time.

The productivity turnaround that China’s State Council wants to promote can’t occur without the infrastructure created by its own Big Tech.

There is an American precedent for Alibaba’s wilting stock price under regulatory stress. In 1999 and 2000, the US Justice Department tried to break up Microsoft. The software giant ultimately settled the case, but the incident so rattled investor confidence that MSFT did not regain its 1999 peak stock price until 2015. Between 2015 and the present, the stock price quintupled.

China’s regulators lack the ideological fervor and the scorched-earth approach of the Clinton Administration’s Justice Department, and the regulatory actions they have taken against Alibaba and its peers are far less severe. Nonetheless, the pattern of investor panic in the face of a government crackdown followed by recovery is likely to repeat itself, but in compressed time.