With all U.S. citizens and entities required to divest from China’s military-industrial companies by Friday, Beijing has mobilized state funds and its capital market to cushion the potential fallout.

One of these blacklisted companies, CloudWalk Technology, an artificial intelligence solution provider, debuted on the Shanghai STAR Market last week. The company raised 1.72 billion yuan ($258 million) from a new share issuance prior to its Friday listing, drawing from domestic investors.

About a third was purchased by nine state-backed strategic investors, including Shanghai Shangguo Investment Asset Management and South Industry Assets Management. The former is indirectly controlled by Shanghai city government, where the latter is an investment arm of China South Industries Group, one of the state military conglomerates that are also part of Washington’s divestment list.

CloudWalk Technology’s stock soared 78% from its offering price during the first four trading days, closing at 27.35 yuan on Wednesday.

Xiamen Meiya said the new share issuance is for the state investor to “solidify stable control by further increasing share holdings.” The company had been a private enterprise, but when it was included in the first batch of Chinese corporations on the so-called entity list, another U.S. trade blacklist established in October 2019, SDIC stepped in as a major shareholder.

The sanctions to ban all Americans from investing in Chinese companies identified as having military ties originated under U.S. President Donald Trump in November 2019, starting with 31 companies. It was later amended by President Joe Biden on June 3, 2021, setting the full enforcement deadline exactly a year later, with the list growing to 59. Nine more were added, increasing the roster to 68.

The majority of the list contains publicly traded companies in Shanghai, Shenzhen or Hong Kong, with a few also listed in Europe. Most are related to military engineering, navigation, space, aviation, rocket and satellite technologies, with many falling under the wing of so-called unlisted central companies. They are elite state conglomerates directly controlled by Beijing.

Those listed in the U.S. market have already pulled out. The country’s three main network operators — China Telecom, China Unicom and China Mobile — and oil and gas conglomerate CNOOC, all targeted along with their unlisted parents, have relisted their shares on the Shanghai Stock Exchange, while keeping their primary listing in Hong Kong. 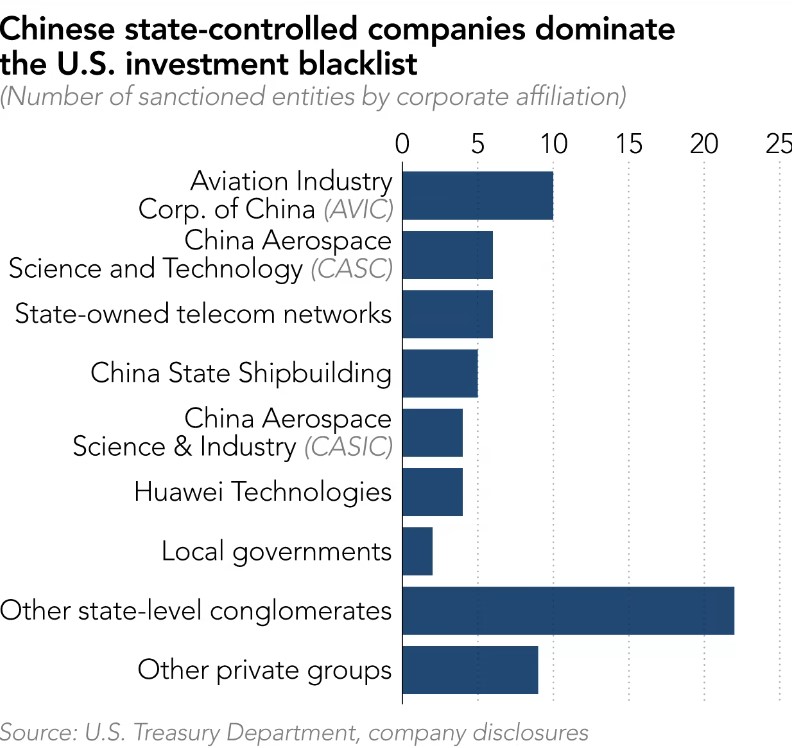 Their Shanghai debuts were promoted as a “homecoming,” cushioning the negative image of being ejected from the U.S. market. China Mobile Chairman Yang Jie said the purpose of the Shanghai listing was to “share the profit of growth with our wide range of users and to harmonize the profits of investors and consumers.”

For those listed in mainland China, state funds have stepped in to enhance their financial base by injecting fresh capital funding.

AVIC Heavy Machinery, a Shanghai-listed arm of Aviation Industry Corp. of China (AVIC), completed its private placement last June, raising 1.87 billion yuan. While other units of AVIC, which is also sanctioned by Washington, took up the majority, over a third was snatched up by the National Military-Civil Fusion Industry Investment Fund.

The fund, established in 2018 under the lead of the Ministry of Finance, has been one of the key vehicles in providing financial ammunition to fill in the potential gap created by U.S. divestments.

The fund also took part in the private placement by Aerospace CH UAV, a drone maker under another sanctioned central company, China Aerospace Science and Technology Corp. (CASC), raising 910 million yuan. The fund became the second-largest investor — only after CASC’s investment arm — by purchasing 33% of the new issue.

CASC intends to use the proceeds on development of military drones, including its homemade CH-4.

The fund — which includes the word “military-civil integration” in its Chinese name — is also the fourth-largest shareholder of Shaanxi Zhongtian Rocket Technology, since its IPO in Shenzhen in September 2020 and has a seat on the board.

Other central companies are involved through different vehicles. Central SOEs Industrial Investment Fund for Rural Area was set up in 2016 with contributions by all 110 central companies — the count is now below 100 after a series of mergers — following President Xi Jinping’s drive to eliminate poverty. Guizhou Space Appliance, headquartered in one of the most impoverished southwestern provinces, raised 1.43 billion yuan through private placement in August by 11 domestic investors, including the rural area fund.

Some U.S. institutional investors have stakes in the Chinese companies in question. Morgan Stanley was the eighth largest-shareholder of Shenzhen-listed Zhonghang Electronic Measuring Instruments, holding 4.54 million shares, or 0.77%, as of the end of last year. However, the company’s first quarter earnings report indicated the U.S. investment bank has disappeared from the top 10 list.

Goldman Sachs was part of the 4.77 billion yuan private placement by Shanghai-listed Dawning Information Industry in October 2020, just a month before Trump named the company as one of the first 31 “Communist Chinese military companies.” Dawning was removed from the list by Biden but returned in December. Goldman snatched 3.6% of the new issuance and held it until the end of last year, according to Dawning’s annual report.

Goldman declined to comment, while Morgan Stanley has not responded to questions from Nikkei Asia regarding the disposal of these shares.

China Shipbuilding Industry Group Power, a Shanghai-listed unit of China State Shipbuilding Corp. which is also on the U.S. blacklist, has substituted the four Chinese character word with “XX” in its annual report published in the end of April. This includes two of its major investors’ names — Military Civilian Integration Marine Defense (Dalian) Industrial Investment and National Military-Civil Integration Industry Investment Fund — and over a dozen other items apparently include the term.

The company has not responded to a query from Nikkei Asia on why it decided to do so.

Mobius Sees China as a Haven After Russia’s Attack on…