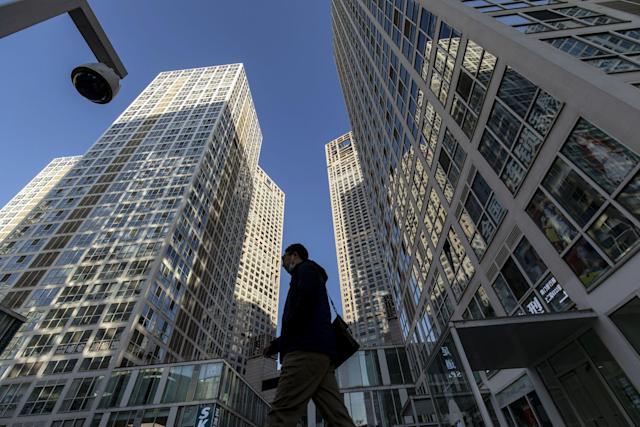 Economists predict China will start adding fiscal stimulus in early 2022 after the country’s top officials said their key goals for the coming year include counteracting growth pressures and stabilizing the economy.

Curbs on the property industry are expected to remain, while there could be fewer regulatory surprises compared with sudden moves in 2021 to rein in sectors from technology to education and entertainment, the economists said.

At the end of their three-day annual Central Economic Work Conference, the Communist Party’s top decision makers on Friday said the top priority for next year is “ensuring stability.” They also vowed to “front load” policies and keep the monetary stance flexible and appropriate.

“Fiscal policy is expected to play a main role in supporting growth next year,” said Ding Shuang, chief economist for Greater China at Standard Chartered Plc, while housing policies will see “fine tuning” rather than a major shift, he added. 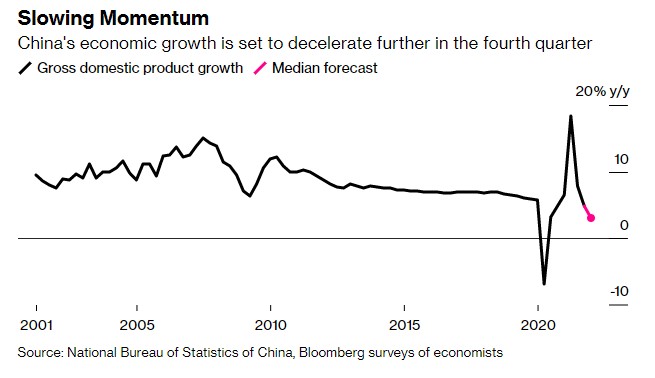 The economy has slowed in recent months because of the worsening property market slump, weak consumption growth, and repeated outbreaks of Covid-19, which have damaged businesses and consumers’ confidence. The meeting’s relatively hawkish language on real estate suggests that the drag from property will mostly persist.

Policy for most of this year had been focused on curbing financial risks and reducing debt in the economy, and developer China Evergrande Group last week became the largest casualty of President Xi Jinping’s campaign to tame over-leveraged conglomerates and the overheated property market.

A call for counter-cyclical policies was the first time Chinese authorities have used the phrase this year, Barclays Plc analysts led by Jian Chang wrote in a note. That “should help ease market concerns of a sharp slowdown in economic growth,” they said.

Economists forecast growth to slow to 3.1% in the current quarter, a deceleration from 7.9% in the April-June period and 4.9% in the last quarter. An official target for gross domestic product growth next year will only be revealed at the annual parliament meeting in March, and analysts predict authorities will do more to ensure growth will reach around 5%.

Macroeconomic easing might not be dramatic in terms of scale, but will likely be front-loaded early in 2022.

The statement after the meeting contained clues pointing to likely regulatory loosening, even as ‘common prosperity’ and carbon neutrality continued to be held up as key goals and preventing property speculation remained a key policy area.

Policy makers will start with “conventional” monetary and fiscal tools, such as cuts to bank reserve requirements and accelerated infrastructure spending, and could loosen curbs on the property sector and local government debt if conventional efforts don’t bear fruit, wrote Larry Hu, chief China economist at Macquarie Group Ltd., in a note.

Beijing is also expected to guide banks to issue loans at a faster pace next year, after it omitted references to efforts to control debt levels in the economy from its summary of the meeting.

“They dropped a lot of the hawkish words on credit growth,” said Chen Long, an analyst at Beijing-based consultancy Plenum.

Local officials need to think carefully before launching any policies that might hurt economic growth, senior economic official Han Wenxiu said at a briefing over the weekend.

“All regions and agencies must take responsibility to uphold economic stability, actively introduce policies that can help stabilize the economy, and be cautious in imposing measures that will have a contractionary effect,” Han said.

In a move that should support fiscal spending early next year, Beijing has told local governments that they can begin selling “special” bonds earmarked for 2022 from January 1, 21st Century Business Herald reported Monday. Bond sales are not officially approved until after the parliament votes on the budget in March, but China has allowed local governments to start selling bonds before that in the past few years.

In 2021, local governments were allowed to issue 3.65 trillion yuan ($574 billion) of such “special” bonds – so-called because they fund specific projects rather than general expenditures – and have sold 3.58 trillion yuan worth so far after rushing to meet the quota in recent months, according to Bloomberg data.

Still, the meeting’s call for local governments to avoid taking on more debt suggests it will be difficult for them to maintain high levels of fiscal spending in the longer term.

“It seems to me that there will be strong stimulus only in the first quarter,” said Houze Song, a research fellow at the Paulson Institute. “Because there remains tight control over new local government off-budget debt, stimulus will weaken as on-budget fiscal expenditures normalize in the second half.”

China and Russia compete for influence in Central Asia

China seeks more curbs on gaming and live-streaming in…