China lashed out at House Speaker Nancy Pelosi for reportedly planning a landmark trip to Taiwan that’s been delayed because she has Covid-19, setting up a showdown when her visit to Asia is rescheduled.

“If the speaker of the U.S. House of Representatives knowingly commits a sneaky visit to Taiwan, it will be a malicious provocation to China’s sovereignty, gross interference in its internal affairs and an extremely dangerous political signal to the outside world,” Chinese Foreign Minister Wang Yi said of a reported trip by Pelosi to Taipei, which would be the first by someone in her post in 25 years.

Speaking in a phone call late Thursday with Emmanuel Bonne, an adviser to the French president, Wang added that Beijing would respond “resolutely” in a way that would ensure Washington bears the consequences, without giving details.

Pelosi, an 82-year-old Democrat, postponed a congressional visit to Asia that would have also included Japan after she tested positive for the coronavirus, a diagnosis that came just two days after she met with President Joe Biden. Media reports by outlets in Japan and Taiwan said Pelosi would visit Taiwan, though her office declined to confirm that when contacted by Bloomberg News, citing longstanding security protocols. The last serving U.S. house speaker to visit was Newt Gingrich in 1997. 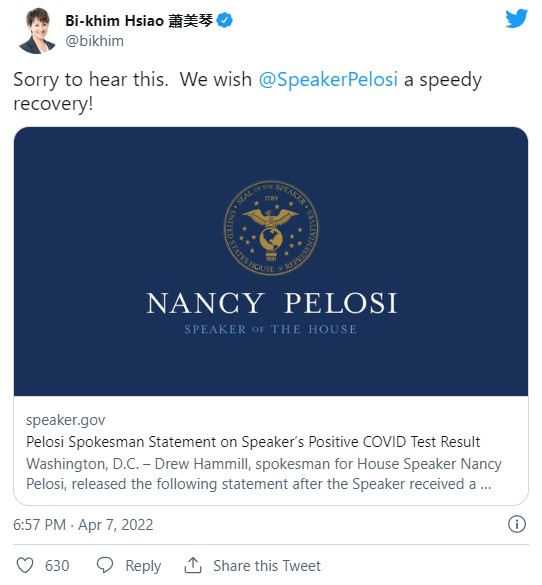 Taiwan President Tsai Ing-wen wished Pelosi a speedy recovery, the spokesman for her office, Chang Tun-han, said in text message, adding that the speaker has been a good friend to Taiwan. Tsai also welcomed the show of U.S. support given Russia’s invasion of Ukraine has raised concern that China may follow through on its oft-repeated threat to take control of the democratic island by force.

A visit by Pelosi would be the most high-profile of Biden’s presidency to date, and comes as Washington steps up its backing for Taipei. The former chairman of the Joint Chiefs of Staff Michael Mullen visited Tsai earlier this year, and the current holder of that office, Mark Milley, said in a Senate hearing Thursday that Taiwan is a defensible island with mountainous terrain. “We just need to help the Taiwanese to defend it a little better, and we can do that,” he said.

China has been ramping up military, diplomatic and economic pressure on Taiwan during President Xi Jinping’s decade in power. Last year Beijing more than doubled its military forays into Taiwan’s air-defense identification zone to around 950, according to official data compiled by Bloomberg, and a visit by Pelosi would likely have been answered similarly.