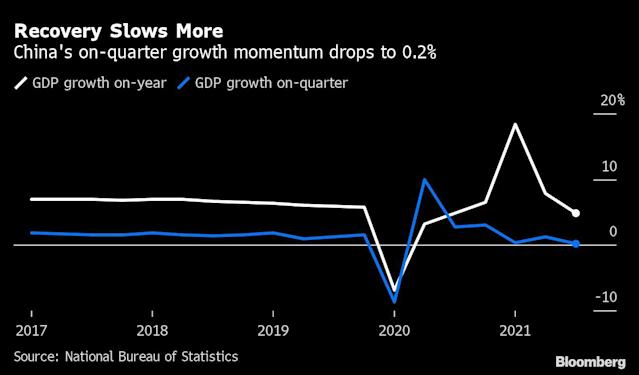 China’s economy weakened in the third quarter, weighed by multiple headwinds from a property slump to an energy crisis.

Gross domestic product expanded 4.9% from a year earlier, the National Bureau of Statistics said Monday, down from a previously reported 7.9% in the preceding quarter and compared with a median forecast of 5% in a Bloomberg survey of economists.

Beijing’s tighter restrictions on the property market have curbed construction activity and squeezed financing to the sector. Meantime, a worsening debt crisis at China Evergrande Group is now spilling over to other developers and contributing to a slump in land sales.

On top of that, electricity shortages in September forced factories to curb output or shut completely, while strict measures to contain sporadic coronavirus outbreaks continued to weigh on consumer spending.

“The investment side of demand is pretty weak, and the power crunch impact on the supply side is also pretty severe,” Helen Qiao, chief Greater China economist at Bank of America Corp, said in an interview on Bloomberg TV. Fourth-quarter growth is likely to drop to 3% to 4%, she said.

The NBS said in a statement the economic recovery “is still not solid” and remains unbalanced, though China will ensure it can achieve its annual targets.

Greater policy support is needed for the economy to pull through the soft patch. But a quick turnaround is unlikely, given the slowdown is being driven predominantly by supply shocks, and the government is committed to driving long-term structural reforms.

Growth was always expected to slow in the third quarter given the higher base of comparison from a year ago, however the severity of the energy crisis and property slowdown has surprised economists, prompting many to downgrade their full-year GDP forecasts.

People’s Bank of China Governor Yi Gang said Sunday the recovery remains intact even though growth momentum has “moderated somewhat.” He forecast the economy would expand about 8% this year.

That’s higher than Beijing’s modest target of above 6% for the year, which suggests authorities may not be in any rush to pump in significant stimulus to arrest the slowdown. Economists expect targeted fiscal and monetary support, with a smaller chance of another cut in the reserve requirement ratio for banks.

Even though the jobless rate fell, “the undeniable fact is that growth has declined rapidly in the third quarter and inconsistent with unemployment rate,” said Raymond Yeung, chief economist for Greater China at Australia & New Zealand Banking Group Ltd. “The outlook remains vulnerable with power shortage, property curbs.”

The extent of the property slump and energy crunch could be seen in upstream sectors such as steel and cement, which contracted. Coal production declined 0.9% in September from a year ago, while coal imports surged 76%.

The PBOC refrained from injecting liquidity into the financial system on Friday, while at the same time asking lenders to keep credit to the real estate sector “stable and orderly.” Economists expect local governments to boost bond sales toward the end of the year to support infrastructure investment.

Premier Li Keqiang also sounded a confident note on the economy in a speech last week, saying China has “risen to the challenges” this year, including from severe flooding and a “complex” international environment.

“In the third quarter of this year, due to multiple factors, growth leveled off a little bit, but for the whole year we have the confidence and the ability to meet our overall development targets,” he said.

A year into China’s tech crackdown, the sky is no longer the…

China’s ‘dual-credit’ policy that spurred the EV sector will…