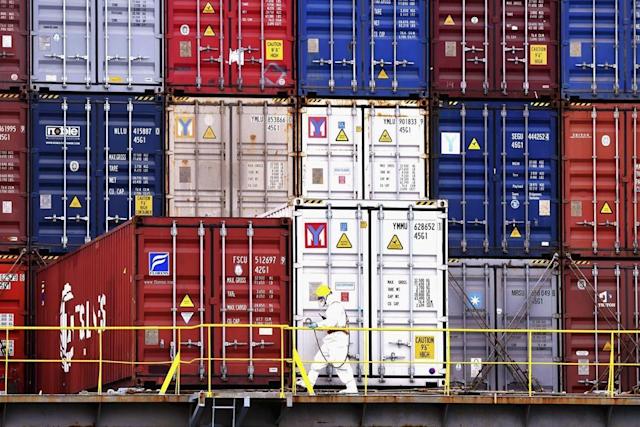 Exports grew 27.1% in dollar terms in October from a year earlier to $300.2 billion, data from the General Administration of Customs showed Sunday. That was the 13th straight month of double digit growth, and exceeded economists’ expectations of a 22.8% gain. Import growth quickened to 20.6% year-on-year but was below the 26.2% forecast by economists, leaving a trade surplus of $84.54 billion.

China’s export growth has remained well above pre-pandemic levels all year. Total exports this year through October have already surpassed all of 2020.

That strength provides support for a Chinese economy that’s losing some steam due to weak domestic demand amid a real estate downturn, low growth of infrastructure investment and cautious consumer spending.

The strong momentum will last for at least the next few months, according to a Bloomberg Economics analysis. But as developed economies continue to reopen and shift away from goods toward services consumption, the demand for Chinese goods could slow gradually.

China’s policy makers have rolled out measures to support the domestic economy, including more supportive policies for small and medium-sized companies as evidence mounts of a further slowdown. So far, the central bank has shown no sign it will step in to add to stimulus, instead sticking to making short-term loans to keep interbank liquidity stable. The central bank hasn’t cut the reserve requirement ratio since a surprise reduction in July and has kept policy interest rates unchanged since early last year.

China releases report exposing malaises of US democracy, timely and to the point:…