China rolled over part of the policy loans coming due this month as the central bank seeks to sustain its support for the economy after cutting the reserve-requirement ratio last week.

The People’s Bank of China injected 500 billion yuan ($78.5 billion) of one-year cash into the financial system, partially offsetting the 950 billion yuan coming due on Wednesday. It kept the interest rate on the loans unchanged at 2.95% for a 20th month. Attention now switches to the PBOC’s review of the loan prime rates next week, the de facto benchmark for new loans.

“It feels like the same measured response from the PBOC,” said Eugene Leow a rates strategist at DBS Bank Ltd. in Singapore. “Market participants are now watching when a move in the rate on the medium-term lending facility or the loan prime rate will take place.” 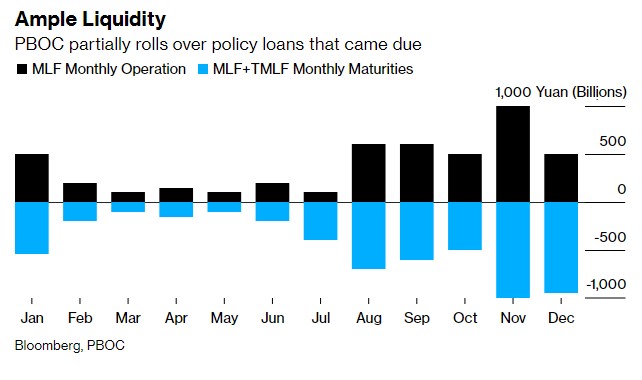 The PBOC’s decision to roll over part of the loans coming due was in line with market forecasts. All of the 11 analysts surveyed by Bloomberg had forecast that result.

Investors have ratcheted up their expectations for easier policy from Beijing amid a slowing Chinese economy, a property crisis and state media reports that a cut to the loan prime rate is coming in the near future.

Economic data published Wednesday added to signs the economy is slowing. Retail-sales growth cooled to 3.9% in November, missing economists’ forecasts of a 4.7% gain. Growth in fixed-asset investment slid to 5.2% for the first 11 months of 2021, compared with 6.1% for the year through October.

China’s 10-year bond yield climbed one basis point to 2.88% after the release of the data and the liquidity operation.

Bonds have rallied and foreign funds have poured into the stock market in record amounts as traders sense a pivot away from a lengthy de-leveraging campaign. Twelve-month yuan interest-rate swaps fell to the lowest level since July 2020 this week, a sign traders are betting on easier monetary policy.

The PBOC last week unexpectedly cut the reserve-requirement ratio for banks — releasing 1.2 trillion yuan of liquidity into the system effective Wednesday — with some analysts pointing to the risk of contagion from China Evergrande Group’s debt crisis as a likely reason.

Economists predict Beijing is set to become more pro-growth next year, with top decision makers recently vowing to ensure stability and “front load” policies. Calls for lower interest rates have been gaining momentum with the fragile property market putting the brakes on the economic recovery.

How far will EU follow the US in its ideological rivalry with China in 2022?