Stocks linked to the so-called metaverse slumped in mainland China after a local newspaper warned against speculative trading in the nascent concept.

Retail traders shouldn’t be hasty in paying for a new and “immature” concept like the metaverse and many stocks that had been bid up were gaming software makers, a commentary in Economic Daily said. The metaverse is a project that requires long-term investment and construction, the newspaper added.

Digital content provider AVIT Ltd. dropped as much as 9.7%, while gaming company Shenzhen ZQGAME Co. plunged as much as 8.1%. Content production firm Shanghai Fengyuzhu Culture and Technology Co. and media marketing business Inmyshow Digital Technology Group Co. tumbled as much as 5.1% and 8.1%, respectively. 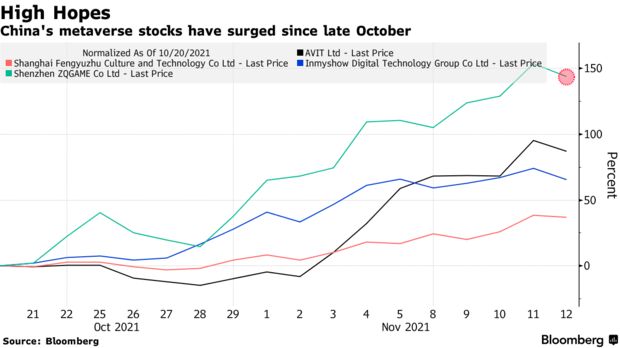 The idea of the metaverse exploded onto trading screens after Facebook rebranded as Meta Platforms Inc. in late October to spotlight its focus on virtual reality, and companies ranging from Microsoft Corp. to Nvidia Corp. have joined the chorus.

That’s bid up shares of firms ranging from obscure Canadian mining firm Meta Materials Inc. in a case of mistaken identity to Taiwan’s virtual-reality industry suppliers. Stock prices for AVIT and Shenzhen ZQGAME have more than doubled so far this quarter.

“We can’t see obvious business in this area at this time,” said Amy Lin, an analyst at Capital Securities Corp. “Investors chasing such kinds of stocks with AR/VR businesses may face a risk” as future winners and earnings trajectories are not visible, she added.

Still, analysts expect Chinese companies such as Tencent Holdings Ltd. that have the war chest and network to invest in such technologies to be more successful in developing business. The tech giant, which sees metaverse as a “real opportunity,” was up as much as 2.9% on Friday in Hong Kong.

‘China’s Robinhood’ brokerages are next…