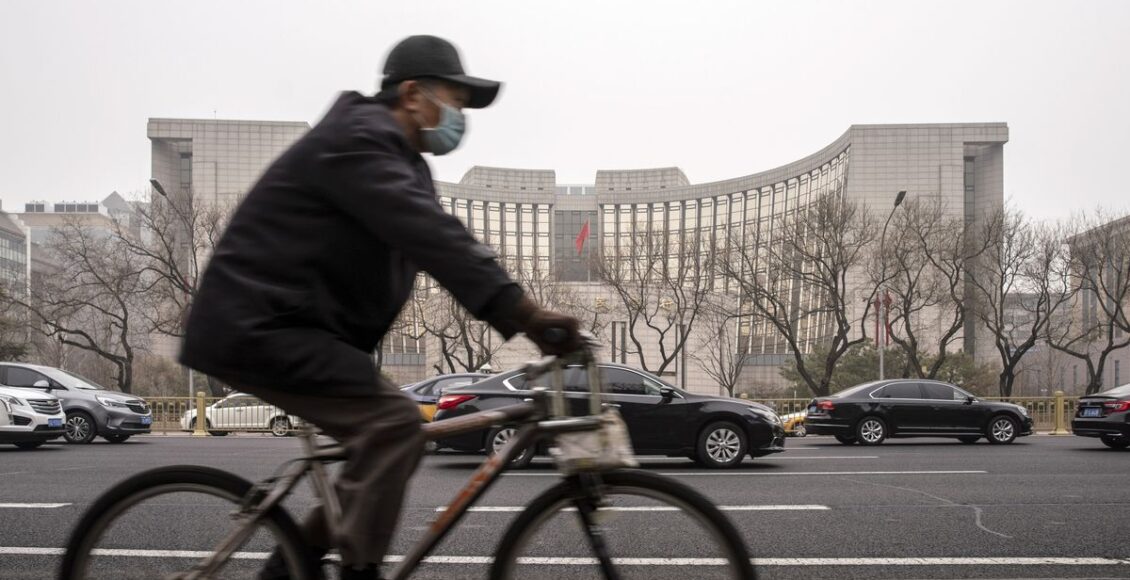 Hopes of policy easing have breathed fresh life into Chinese financial assets, with strong signs investors are returning to the market after being deterred by months of regulatory crackdowns and an economic slowdown.

Everything from stocks to the nation’s sovereign and dollar bonds are rallying, with investor confidence boosted by the yuan’s surge to a three-year high. Foreign funds piled a near-record amount of money into mainland shares on Thursday, after last month buying the most Chinese government notes since January.

Beijing’s signals this week that it will provide more liquidity for banks while easing curbs on the real estate industry is stoking optimism that a long-running campaign to deleverage the economy may be coming to an end. The benchmark CSI 300 Index capped its biggest three-day gain since mid-May on Thursday, as a moderation in factory inflation provided room for easing. 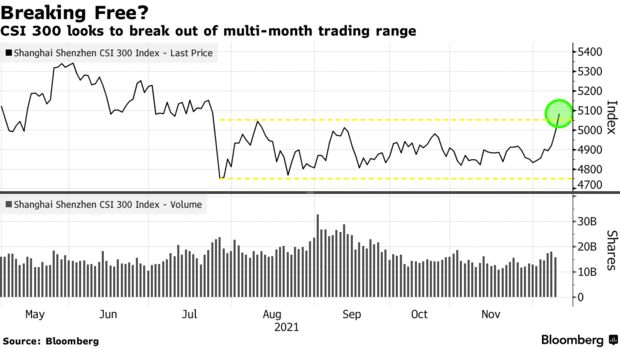 “Even with the uptick in prices this past month, consumer inflation remains well within check and is in stark contrast to the persistently elevated levels of consumer price inflation in the U.S.,” according to David Chao, global market strategist, Asia Pacific ex-Japan at Invesco. “The PBOC is in an enviable position to deploy greater monetary stimulus such as additional RRR cuts or short-term liquidity injections to the economy if growth headwinds remain.”

The CSI gauge jumped 1.7% on Thursday. Consumer, healthcare and technology sectors were the top performers on the gauge, which is rebounding after capping the worst monthly loss since July. Hong Kong’s Hang Seng Index also climbed 1.1%.

China’s central bank said Monday it will cut the amount of cash most banks must keep in reserve from Dec. 15. Factory inflation slowed in November from a 26-year high, data showed on Thursday. The consumer price index rose 2.3%, the fastest pace since August 2020 but below the projected 2.5% gain.

“The latest RRR cut should benefit A-shares more than other markets as they are more sensitive to domestic liquidity conditions,” said Marvin Chen, a strategist at Bloomberg Intelligence, adding that this second cut following a similar move in July should support the onshore market into early 2022.

This week’s rally means the CSI gauge is now less than 3% away from erasing all its losses for 2021. It is still lagging the S&P 500 Index by more than 25 percentage points – set for the biggest underperformance since 2013 – as China tightened rules for its private industry and cracked down on the property sector.

Expectations of further easing are now spurring optimism among equity traders. And with the Federal Reserve on course to withdraw stimulus, the divergence in monetary policy in the world’s two biggest economies looks set to be one of the key themes for stock investors in the coming year. 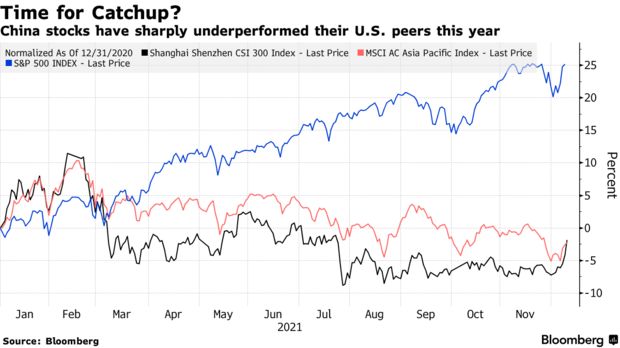 Overseas investors piled in to snap up 21.7 billion yuan ($3.4 billion) worth of onshore shares on Thursday, nearly matching a record purchase in May, with total net inflows this week now nearing 40 billion yuan, according to Bloomberg-compiled data. Trading turnover in Shanghai and Shenzhen has also mildly risen this week.

“Moving into 2022, there is room for China stocks to play catch-up, considering that they have been lagging in terms of performance this year,” said Jun Rong Yeap, a strategist at IG Asia Pte. “Accommodative policies may also provide a positive backdrop for growth, but the property sector will remain a key risk to watch.”