China Locks Down City of 13 Million in Protracted Covid War

China locked down the western city of Xi’an on Thursday to stamp out a persistent Covid outbreak, its biggest such move since the pandemic started in Wuhan, underscoring how the country’s zero-tolerance approach hasn’t allowed it to move on since the virus emerged nearly two years ago.

The 13 million residents of Xi’an were told to remain in their homes and to designate one person to go out every other day for necessities, triggering fights over access to food. Non-essential travel out of the city was banned. This came after a second round of mass testing pinpointed 127 Covid infections scattered across 14 districts, making containment of the virus “grave and complicated,” the official Xinhua News Agency reported.

The rising number of cases underscores the challenge China faces at a time of increased holiday travel and preparation for the winter Olympic Games, which will feature an influx of athletes and their entourages in February. The vast majority of the infections stem from the delta variant, which spread through most of the world in the summer and fall. The country is girding for the more infectious omicron strain, which has been shown to evade immunity from vaccination or previous infection.

Chinese Vice Premier Sun Chunlan urged “swift” measures to curb the spread of infections, the report said. Sun, whose membership in the 25-person Politburo makes her one of China’s most-senior officials, also stressed the importance of tightening restrictions on the movement of people to prevent large gatherings in key areas, according to Xinhua.

The lockdown of Xi’an is the latest escalation in China’s efforts to extinguish local transmission of the delta variant as it becomes the only country in the world still bent on eliminating the virus and bringing cases to zero. To prevent the infections in Xi’an from flowing into other areas, the city cancelled all domestic flights on Thursday, local media reported in the Paper.

Throughout the pandemic, officials have been able to stamp out outbreaks within about a month through mass testing, aggressive contact-tracing and targeted lockdowns.

Yet as the virus’s new strains become more infectious, increasingly disruptive measures have been needed to contain outbreaks, putting pressure on the world’s second largest economy. It’s been more than two months since there were no new local cases of Covid in China. 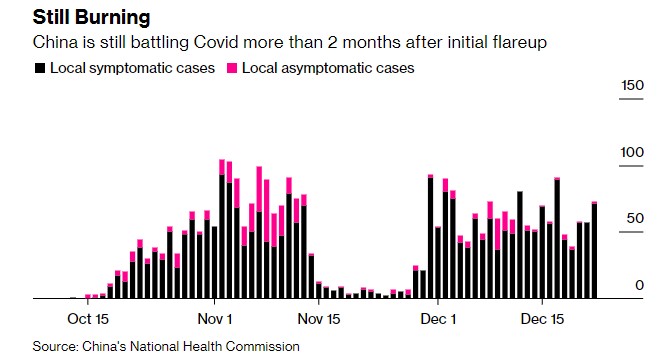 While local authorities have in the past used targeted lockdowns to slow outbreaks in smaller places in China, no major city has been put under mass restrictions since Wuhan in early 2020. It has a similar population size as Xi’an.

Officials in Beijing on Thursday acknowledged that there will inevitably be Covid infections at the winter Olympic Games, which are set to begin in early February. They urged all participants to get booster shots to better protect against the virus, especially those caused by the immunity-evading omicron variant.

The outbreak in the city, the capital of many ancient Chinese dynasties that’s known for its terracotta warriors, traced its roots to a flight from Pakistan. A cleaner at a quarantine hotel got infected two weeks ago after disinfecting the rooms of travellers who tested positive upon arrival in China. The virus quickly spread to coworkers, while another chain of transmission may have brought it from the airport to local communities.

Many of the early cases were caused by a subtype of the delta strain. Yet the virus’s subsequent spread hasn’t been fully accounted for, enabling it to covertly fan out across the city and triggering the sweeping lockdown in an effort to contain it. More than 200 cases have been detected through Thursday.

While the number of infections remains small, the fact they are scattered across the city’s 14 districts shows how difficult it will be to contain the outbreak. Officials still haven’t identified some chains of transmission and the city is initiating a third round of mass testing in hopes of spotting them.

Subsequent cases have been found in two other cities in the Shaanxi Province, where Xi’an is the capital. Infections also occurred in Beijing and the southern Chinese manufacturing hub of Dongguan, where two dozen cases linked to the Xi’an outbreak were detected.

On China’s social media, some people described the outbreak as the worst the city has encountered. Videos posted online show people fighting over food and other essential goods in supermarkets as they stock up for the lockdown.

The outbreak comes as the city is set to hold a graduate school entrance examination for some 135,000 people next weekend. Some have been told to sit for the exam in other cities or provinces, while those who are infected or have been identified as a close contact will take the test in quarantine.

Meanwhile, China has found four omicron infections from people returning from overseas. It hasn’t yet seen the far more infectious strain spread in the local community. Authorities have vowed to tighten restrictions at borders and ports as they see a mounting risk of infection seeping in from overseas.

S.Korea holds talks with China amid spat with Taiwan