China Likely to Make 5% Growth Its Bottom Line for 2022

China is likely to set a floor for economic growth of 5% next year as it tries to balance a desire to rein in the real-estate sector with the need for stability in a year of crucial political change.

That’s the consensus among economists after year-on-year growth weakened to below that threshold in the second half of this year. The target would represent a sizable drop from pre-pandemic growth rates that were closer to 7%, and reflect expectations that Beijing will persist with its efforts to reduce its reliance on real estate even at the cost of slower growth. 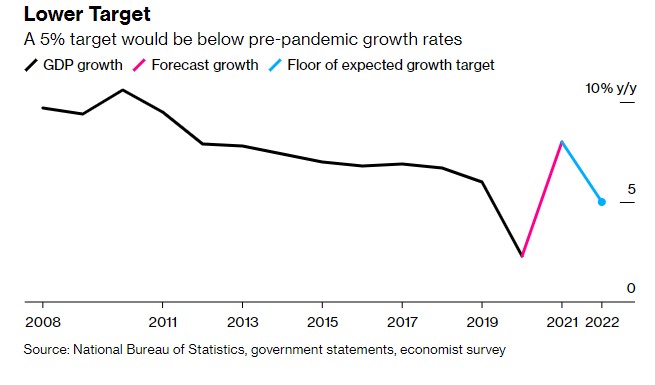 The government sets a growth target for the economy in most years. Of the 10 economists predictions compiled by Bloomberg News, seven see officials aiming for growth of 5% or higher in 2022, with three others seeing the possibility of a goal slightly below that level.

China’s Academy of Social Sciences, a state-run think tank that advises Beijing on policy, recommended last week that the target – usually revealed to the public in March – should be set at “above 5%.”

Achieving that would mean Beijing needs to implement looser fiscal and monetary policy to help growth accelerate from its current levels. Latest data showed the economy continued to weaken in November, fueling calls for more stimulus.

Here are the key factors economists see influencing Beijing, and why further monetary easing is likely.

China’s ruling Communist Party will announce a once-in-a-decade leadership transition in the autumn of 2022. President Xi Jinping is widely expected to extend his rule as party chief and install allies in key positions, while Premier Li Keqiang is expected to retire.

Economic growth helps burnish Xi’s credentials as a competent leader as he tries to influence the transition.

“Past experiences suggest that Beijing would strive to beat the growth target in a year of political reshuffle,” economists at Morgan Stanley wrote in a note. 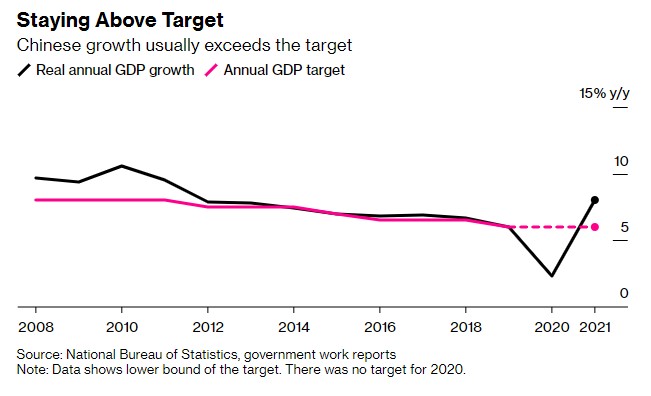 Jobs matter as well. Chinese government officials are under intense pressure to help create new jobs for the tens of millions of people who migrate from China’s countryside to cities and graduate from universities each year. While Beijing reached its 2021 target of 11 million new urban jobs by the end of October, a record 9.1 million students will graduate this year and the youth unemployment rate was 14.3% in November.

The required growth rate for stable employment is above 5%, according to economists at Goldman Sachs Group Inc.

“Significant labor market pressure would build if growth slows further and persistently,” they wrote in a recent report.

Chinese officials and government-linked academics often talk about the “potential” growth rate of the economy, referring to the amount of output that is in line with the growth of inputs and which can be reached without overheating.

People’s Bank of China Governor Yi Gang estimated in September that the current potential rate was 5%-6%, while Sun Guofeng, the central bank’s head of research, said this year that the PBOC aims to keep growth close to its potential. That sets 5% as a floor, according to economists at Tianfeng Securities Co.

The Communist Party has vowed to double the size of the economy from 2020 levels by 2035, and views achieving the goal as key to maintaining legitimacy with the public. Meeting that requires an average annual growth rate of around 4.7% over the whole period.

Economic growth generally slows as countries develop, so rates at the beginning of this period are expected to be higher.

“We are in the first five years of the 2035 goal, you can’t slide under 5%, otherwise there’s no way China could meet that doubling goal,” said Bo Zhuang, a senior analyst at Loomis Sayles Investments Asia.

Beijing has previously relied on stimulating property construction to revive growth, an option that officials have now largely ruled-out. At a meeting setting policy priorities for 2022, top officials affirmed their commitment to controlling the property sector – which accounts for as much as 20%-25% of economic output.

Corporate investment could be another growth driver next year, with analysts at JPMorgan Chase and Co. expecting a broad measure of manufacturing investment to grow 8% in 2022. That will also require a faster pace of growth in bank credit. Consumer spending could accelerate if employment stabilizes and officials keep coronavirus outbreaks under control.

However, a deeper-than-expected slowdown in the property market or a sustained hit to consumption from outbreaks of coronavirus would make it difficult for Beijing to achieve growth above 5%. If those risks materialize, officials’ commitment to avoid using the property market for stimulus will be severely tested.