The producer price index rose 8% from a year earlier compared to 8.3% in March, official data showed Wednesday, above the median estimate of a 7.8% increase in a Bloomberg survey of economists. Consumer-price growth accelerated to 2.1% from 1.5% in the previous month, faster than a projected 1.8% gain. 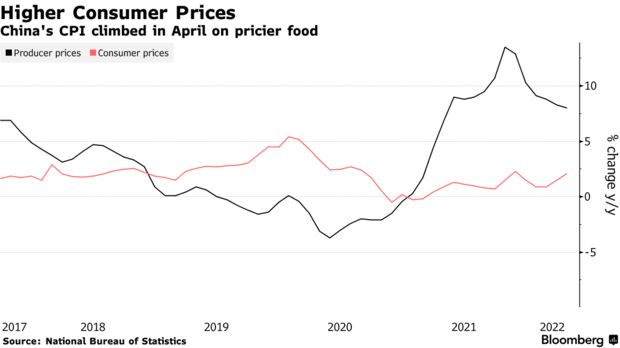 While commodity prices are inching down from the very high levels spurred by the war in Ukraine, costs remain elevated and have squeezed manufacturers’ profits. Covid outbreaks in China and restrictions intended to contain them have indirectly added to operating costs, making it tougher for factories to maintain production, obtain raw materials and ship out finished goods.

The uptick in consumer inflation was attributable to virus outbreaks and higher global commodity prices, Dong Lijuan, senior statistician at the National Bureau of Statistics, said in a statement accompanying the data.

Despite the higher-than-expected inflation figures, Zhang said the issue is not a concern for policy makers. “The main challenge remains the balance between containing omicron outbreaks and stabilizing economic growth,” he said.

China’s benchmark CSI 300 Index gained as much as 1.7%, extending Tuesday’s rise while the ChiNext Index advanced 3.3%. The rally came as virus cases in China declined, boosting sentiment among traders.

Food became pricer in April as several areas locked down to contain the spread of Covid. Fresh vegetable costs jumped 24% from a year ago, compared to an increase of 17.2% in March, NBS data showed. Pork prices continued to fall, plunging 33.3%. Wholesale vegetable prices in the first week of May have continued to drop from the level in April, but are still almost 12% above the price in the same week last year.

A 28% jump in fuel costs also contributed to higher consumer prices. Prices of vehicle fuel rose the fastest of any metric within the CPI basket, according to a breakdown provided by the NBS. 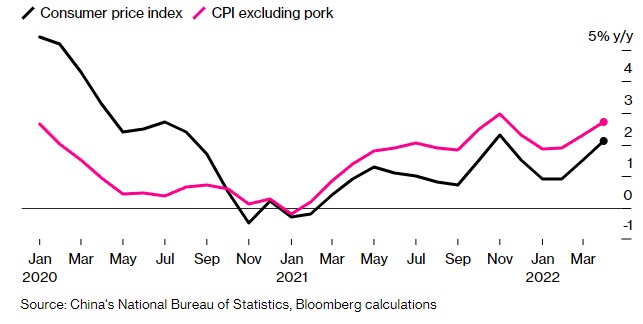 The lockdown in Shanghai threatens to exacerbate global supply chain pressures and inflation concerns, according to economists at Fitch Ratings. The economists cited a plunge in Shanghai freight traffic volume in April and early May resulting in backlogs at the port of Shanghai as contributors to those issues, according to a research note published Tuesday before China’s inflation data was released.

“With Shanghai handling around a fifth of China’s port volume and China accounting for 15% of world merchandise exports, shortages of manufactured goods could intensify, adding to existing global inflationary pressures,” the Fitch economists wrote. “This channel is likely to outweigh the effect of slower growth in China on global inflation through a weakening of commodity demand and prices.”

Beneath the mixed headlines, details in China’s April price data offer more evidence of the demand-hit from the covid lockdowns. Consumer price inflation outside of energy and food dropped to a 10-month low, while sequential gains in factory-gate prices decelerated to half March’s pace. The moderating PPI and benign CPI inflation open a wider path for the People’s Bank of China to ease.

The decision to stand by a strategy built on strict Covid curbs has led several economists to cut growth forecasts for the year to well below the government’s target of about 5.5%, as an unswerving commitment to Covid Zero means more cities will lock down or mass test their citizens for as long as the virus is spreading. The capital city Beijing, e-commerce hub Hangzhou and Yiwu, a city known for wholesaling Christmas decorations, have all rolled out restrictions to contain the virus.

As long as authorities can contain the virus and alleviate the disruption to supply chains, though, the rise in consumer prices will remain “benign” for the year, according to Bruce Pang, head of macro and strategy research at China Renaissance Securities Hong Kong Ltd.

The room for policy action by the People’s Bank of China “is more constrained by the policy tightening of overseas major economies and the need to maintain a stable yuan exchange rate,” he said.

JPMorgan’s ‘Uninvestable’ Call on China Was Published in Error