Rising food costs pushed China’s consumer inflation up last month to the highest level in almost a year and a half, but with “price pressures generally easing”, once sky-high factory-gate inflation eased in November.

China’s official consumer price index (CPI) rose by 2.3 per cent in November from a year earlier, up from a rise of 1.5 per cent in October, the National Bureau of Statistics (NBS) said on Thursday. This was below the expectations of analysts in a Bloomberg survey, but was the highest since August 2020.

But the price of pork – a staple meat on Chinese plates – fell by 32.7 per cent compared with a year earlier in November.

The increase was due to the “combined influence of seasonal rising demands, increasing costs and sporadic coronavirus outbreaks”, according to senior NBS statistician Dong Lijuan.

Beijing has set a 2021 CPI growth target of around 3 per cent, while China’s top government think tank recommended on Monday that authorities set a consumer inflation target of 3 per cent.

“Consumer price inflation rose above 2 per cent for the first time in over a year last month. But this was almost entirely due to food prices. Core inflation remains subdued and producer prices have levelled off,” said Julian Evans-Pritchard, senior China economist at Capital Economics.

“We think the headline rate will drop back below 2 per cent before long, with vegetable prices having already reversed some of their gains during the past couple of weeks, and the economic slowdown is likely to keep core inflation subdued.” 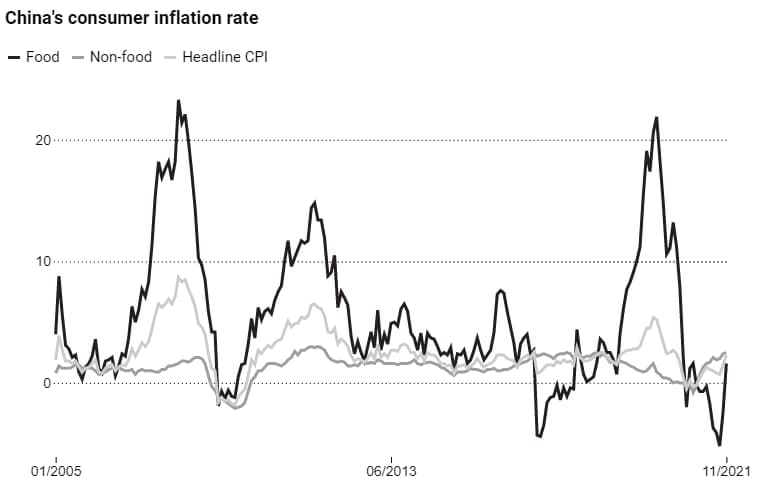 China’s core consumer inflation rate, excluding volatile food and energy prices, rose by 1.2 per cent in November compared with a year earlier, down from a rise of 1.3 per cent in October.

Non-food prices rose by 2.5 per cent last month, year on year, up from a reading of 2.4 per cent in October.

Meanwhile, the producer price index (PPI), which reflects the prices factories charge wholesalers for products, rose by 12.9 per cent in November from a year earlier, down from the 26-year high of 13.5 per cent growth in October, the NBS said.

This was above expectations of analysts in a Bloomberg survey who had predicted a fall to 12.1 per cent growth, but in line with China’s purchasing manager’s indices that showed the input and selling prices for both the manufacturing and non-manufacturing sectors moderated in November. 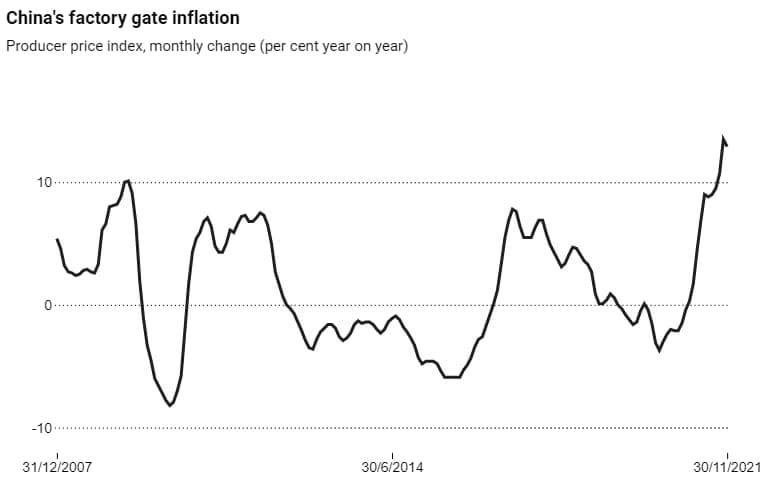 The slowdown was due to rapidly rising prices of coal, metals and other raw materials being curbed, added Dong from the NBS.

“There were outright declines in the price of many upstream industrial goods such as coal and metals thanks to easing energy shortages and softer downstream demand,” added Evans-Pritchard.

“After rising earlier in the year, the output prices of electronics are now edging down again, perhaps reflecting the improving supply of semiconductors.

“The upshot is that, food aside, price pressures are generally easing, especially in heavy industry. As such, we don’t think inflation concerns will hold back the [People’s Bank of China] from further loosening measures, including policy rate cuts.”

On Monday, the People’s Bank of China said that it will cut the reserve requirement ratio for major commercial banks by 0.5 percentage points, releasing 1.2 trillion yuan (US$188 billion) worth of long-term liquidity into the interbank system next week with an aim of supporting the Chinese economy in the face of growing headwinds.

“We think the PPI has peaked after months of sharp increases, and the higher comparison base should set PPI into a slower growth pace ahead,” said United Overseas Bank Economist Ho Woei Chen.

“Nonetheless, supply-chain disruption and high commodity/energy prices continue to pose upside risk, as this could feed into higher inflation expectations and increase the pass-through from PPI to the CPI. This may further dampen the growth outlook for China next year.”