China’s commitment to Covid Zero means it’s all but certain to miss its economic growth target by a large margin for the first time ever.

Economists’ median forecast for gross domestic product growth this year has dropped to 4.5%, according to the latest survey compiled by Bloomberg, well below the official target of about 5.5%.

Beijing has admitted to missing the goal just once since first setting it three decades ago — by a mere 0.2 percentage point in 1998. It didn’t set a target in 2020, when the coronavirus pandemic first hit.

China has never adjusted the target mid-year, so there’s no clarity on whether such an option exists or how it would be done. Economists think it’s more likely the GDP goal will be quietly downplayed as preserving and creating jobs becomes the priority.

President Xi Jinping has laid the groundwork for treating the GDP target as just one goal among several for officials to aim at, writing into a key Communist party document last year that it should no longer be a “sole criterion of success.”

Beijing hasn’t mentioned the growth target since March. Instead, officials have repeatedly stressed stabilizing employment, which the government can boost by subsidizing companies to retain workers to keep unemployment below its target of under 5.5%, even if they can’t work due to virus controls.

It “makes good sense” for Beijing to no longer view the goal as a “hard constraint,” said Zhu Ning, a former adviser to China’s central bank. 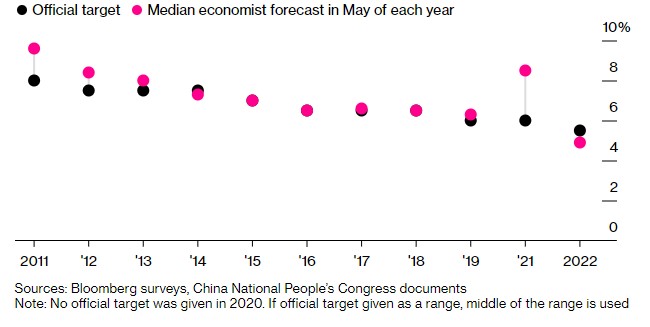 By de-emphasizing GDP growth in favor of other priorities such as national security, controlling financial risks and reducing pollution, missing the target is likely to pose little political risk for Xi, even as he seeks a third term as leader at a Communist Party congress in the fall.

“I don’t see missing the GDP target as particularly likely to lead to real blowback,” said Jeremy Wallace, an expert on China’s economic policy making at Cornell University. “The government will argue that below-target growth was justified by needed Covid measures and point to China’s low death rate as evidence of the wisdom of its choices.”

Indeed, the propaganda machine is already whirring. Major state-run newspapers, including the People’s Daily, Shanghai Securities News and Economic Daily, all carried a report on their front page Wednesday about Xi’s priority on growth and the country’s economic achievements under his leadership.

Another option: Fudge the numbers. Based on past experience, statistical smoothing could add 1 percentage point to China’s growth rate this year, economists at Goldman Sachs Group Inc. wrote in a recent note. However, official data for April showing a sharp contraction across the economy suggest “the negative Covid shock is too large to smooth,” they added.

“The headline data for April matched up pretty well with the high-frequency data and alternative sources, so I doubt the government will try to massage the current contraction out of the GDP statistics,” said Adam Wolfe, an economist at London-based Absolute Strategy Research.

The GDP target was part of the government’s work report, approved by the National People’s Congress, the Communist Party-controlled parliament. So if it were to be tweaked lower, it would likely need approval by the NPC’s standing committee.

In 2020, the government didn’t publish a target due to pandemic uncertainty — the first time that happened since at least 1989. But Beijing resumed growth targeting the following year, suggesting it still has a role in coordinating and motivating the nation’s huge bureaucracy.

While Beijing may be reconciled to missing the target, that doesn’t mean it has given up on growth entirely. If the economy slows too dramatically, it could be outpaced by the US for the first time since 1976 — a development Washington would be likely to seize on as part of a competition over economic models.

As a result, Beijing could see US GDP growth, which the International Monetary Fund forecasts at 3.7% this year, as a baseline. Economists expect additional stimulus, which could include cash handouts to households and financial support for the tech sector.

“Beijing will try to climb down from the 5.5% target,” said Houze Song, an economist at think tank MacroPolo. “How Beijing handles the situation in the coming months will matter more than missing the target. If it handles well, it can offset some of the damage.”

Call for HK to prepare for possible US sanctions