China’s top political advisory body plans to host a forum next week with some of the nation’s largest private-sector firms including Baidu Inc., an event that will be closely scrutinized by investors debating whether Beijing will dial back its clampdown on the technology industry.

The Chinese People’s Political Consultative Conference aims to host the symposium next week with attendees including officials from government agencies such as the Cyberspace Administration of China and business executives including Baidu founder Robin Li, people familiar with the matter said. Vice Premier Liu He, President Xi Jinping’s top economic aide, may also attend, said the people, asking not to be identified discussing a private matter.

While the conference is focused on the broader theme of developing China’s digital economy, investors will likely watch for signs of whether Beijing intends to wind down its year-long crackdown on the tech sector. Xi’s administration is enlisting the industry — the biggest growth driver of the past decade — to revitalize an economy struggling with rolling urban lockdowns, supply chain bottlenecks and evaporating consumption.

Sentiment toward the industry has swung wildly in recent weeks, with companies from Tencent to Jack Ma’s Alibaba surging April 29 after China’s top leaders issued a sweeping set of pledges to boost economic stimulus. Later that day, the South China Morning Post and Wall Street Journal reported the government was organizing a symposium — originally slated for earlier this month — to signal a let-up in the bruising pace of Beijing’s campaign. That rally proved short-lived, in part because of a lack of concrete measures to prop up a sector that’s shed more than $1 trillion of value. On Wednesday, tech companies led a rally in China’s equity market. 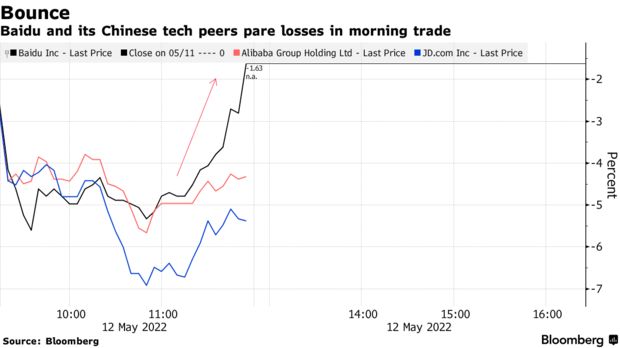 In April, the CPPCC convened a videoconference meeting with firms in Hangzhou, the eastern Chinese city at the heart of the country’s private sector expansion, including surveillance camera maker Hangzhou Hikvision Digital Technology Co. That was part of a series of preparations for a national conference slated for May, the agency’s official newspaper said back then.

It’s unclear whether next week’s forum will trigger policy changes or easing, the people said. The timing could also shift, given the difficulty of organizing a major conference while cities from Beijing to Shanghai grapple with shifting Covid lockdowns. Delegates will attend virtually as well as in person, depending on role and location. Representatives for Baidu didn’t respond to requests for comment, while calls to the CPPCC’s news office weren’t returned.

The CPPCC, whose more than 2,000 members include the nation’s most prominent politicians and entrepreneurs such as Li, exists primarily to debate, advise on and support policy and legislation, or as a sounding board to the nation’s leaders. Its members meet at least once a year and consistently echo the nation’s top priorities, from population growth in 2021 to systemic financial risks in 2018.

Beijing has now made stability its core priority in a year plagued by global geopolitical and economic uncertainty — particularly as its top officials prepare to effect a key leadership transition toward the end of 2022. China already made a promise in March to ease its regulatory onslaught, as part of efforts to stabilize battered financial markets and stimulate the economy.

That’s fueled expectations that the crackdown — which started with the dramatic cancellation of Ant Group Co.’s record IPO before snowballing into an assault on every corner of China’s technosphere — has run its course, or is at least switching to a more sustainable pace.

That would be welcome news after a turbulent 2021, when Beijing curbed gaming time for minors, outlawed profits in swaths of the online education sector, forced companies from Alibaba and Meituan to Didi Global Inc. to alter core business practices and otherwise cast the future of a once-free-wheeling industry in disarray.

But investors remain wary as they weigh a mixed bag of developments, including a restart of gaming approvals and a campaign to rein in the little-understood algorithms that internet companies employ to serve content and gather data. The Hang Seng Tech Index rallied as much as 37% this year since a mid-March low, before giving back most of those gains in past weeks.