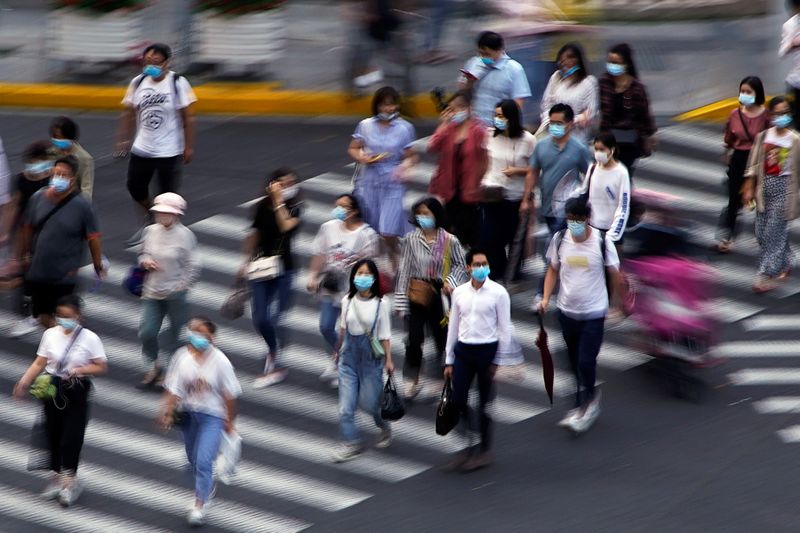 China’s economy is facing multiple risks heading into next year, with a property slump lingering and a new virus variant possibly upending the global recovery.

Economists expect Chinese authorities to boost fiscal and monetary support next year after a relatively restrained approach for most of this year. The People’s Bank of China last week signaled an easing bias, while the State Council, China’s cabinet, urged local governments to speed up spending.

Softer Growth
Economist expect China’s economy to expand by 5.3% in 2022

All eyes are on two key political meetings in December – the Communist Party’s Politburo and the Central Economic Work Conference – for clues on next policy steps.

Here’s a look at what economists are expecting for gross domestic product and financial support in 2022:

Beijing has been gradually downplaying its focus on a GDP target, with Zhu expecting the government to settle on a range 5.5%-6% next year from “above 6%” in 2021. Even so, growth will likely undershoot next year’s goal and come in at 4.7%, he estimated. Authorities will likely stick with their approach of fine-tuning policy – providing targeted support to areas that need it rather than flooding the economy with stimulus. For the housing market, that means some normalization in mortgage loans and lending to property developers, though no lifting of the “red line” restrictions, he said. Fiscal policy will continue to be a drag on growth, although smaller, at an estimated 0.5% of GDP in 2022 versus 3.6% this year. The probability of interest rate cuts next year is low, he said.

Bloomberg Economics says the government will likely target a 5%-6% GDP range next year, with growth likely to come in at 5.7%. In 2021, policy played a secondary role in setting the growth trajectory, but that’s likely to change next year, Chang Shu and David Qu wrote in a report. The extent of the slowdown will hinge largely on what balance China strikes between supporting short-term growth and advancing long-term reforms, they said. The People’s Bank of China will likely cut the interest rate on its one-year medium-term lending facility by 20 basis points and the reserve requirement ratio by 100-150 basis points by the end of 2022.

Growth will likely slow to 5.4% in 2022, with weaker contribution from exports and consumption but an improvement in investment. The PBOC could cut the reserve required ratio for banks before the Lunar New Year in early February as top officials including Premier Li Keqiang stressed the economy’s challenges recently, according to Hu. The central government could step up its fiscal support for industries including high-end manufacturing, chip making and smart infrastructure, while continuing to help small businesses, she said in a briefing Monday. The omicron variant could help Chinese exports to stay robust next year, she said.

The economy could grow 4.6% in 2022, with the government setting a target of 4.5%-5.5%, according to ANZ. Household consumption will provide the main support to the economy and contribute 45% of headline growth, with exports remaining robust while investment will likely be weak. Property investment will likely contract under a continued hawkish policy stance on the sector, Yeung said in a report last week. The PBOC is forecast to keep policy interest rates unchanged and focus on managing credit expansion in specific areas, especially for small businesses. Fiscal policy could shift its focus to rolling out tax cuts to small firms, households and green projects.

The property downturn is a major concern, with no growth in real estate fixed-asset investment expected next year, Citigroup economists including Yu wrote in a note. That will cut the GDP growth rate next year to 4.7%, they said. China should be close to the tipping point for more decisive growth-supporting efforts though, and the Central Economic Work Conference in mid-December will be closely studied for clearer signs of more support. While the PBOC will likely continue its targeted support for small and mid-sized businesses, decarbonization and consumption, Citigroup also expects a 50 basis-point cut in the RRR and a 25 basis-point interest rate reduction in 2022.

Growth is set to weaken to 5.4% in 2022 as a property downturn continues and the government’s Covid Zero approach impedes consumption. In response to the downward pressure on growth, authorities are expected to ease macroeconomic policies in late 2021 and early 2022, Kuijs and Tommy Wu wrote in a report, with a more accommodative stance on credit likely and an increase in local government bond sales. While the government will largely stick to its tight “three red lines” policy on property-developer financing, it may relax restrictions marginally, with a possibly easier credit policy and an increase in rental unit construction. The Covid Zero approach is expected to last until late in 2022, which could result in a 6% average real household consumption growth in 2022.

Weibo bans 52 accounts, some with millions of followers, in…