A combination of raw material inflation and weak consumer spending has made the third quarter a brutal period for China’s biggest companies, with property, agriculture and power generation sectors set to show the worst plunges in profit.

Roughly a quarter of China’s over 4,000-listed firms have already published earnings or preliminary results for the season. While still early, analysts concur that overall year-on-year growth will be disappointing, accentuated by the comparison to last year’s high base when China was the only major economy that grew during the pre-vaccine stage of the pandemic. 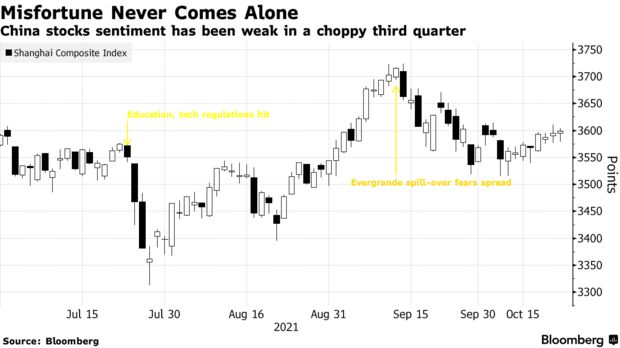 The corporate outlook is also clouded by a prolonged chip shortage and an energy crunch limiting manufacturing capacity. Beijing’s crackdown on the tech sector and a growing debt crisis among highly leveraged property developers are adding to the lackluster season.

Goldman Sachs has lowered 2021 earnings growth for mainland-listed firms to 20% this year from 27% earlier, while CICC expects the number of sectors with disappointing results to outnumber those that beat expectations.

Here’s what to expect as China’s earnings season kicks into high gear next week:

First, one of the only bright spots: as China faces both energy and supply chain shortages, upstream companies providing everything from steel to silica have seen marked gains.

With prices surging amid the competition for supply, raw material makers in sectors like mining and chemicals are seeing earnings double this quarter according to preliminary figures, said brokerage Industrial Securities.

But the days of abundance for these cyclical names are likely nearing an end: sequential growth has already slumped to the low single digits, CITIC Securities wrote. And while prices have inflated, sales volumes have not, reflecting the ephemeral nature of the current surge, said Huatai Securities analysts including Zhang Xinyuan. 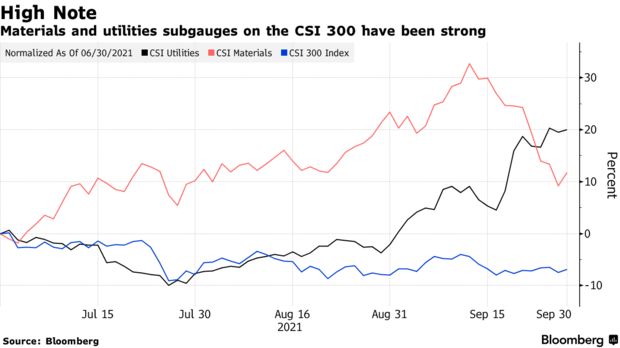 The power generation sector had a bruising third quarter, with coal-based power producers unable to buy enough fuel, and prevented from raising electricity prices on consumers by government caps.

Around two-thirds of the firms that have reported so far show a deterioration in earnings, Huatai found, with the weighted average growth for the sector falling 114%.

Among them are Guangdong Electric Power Development Co., expecting a loss the first time this year in the third quarter.

But a reprieve may be on the horizon, after China said earlier this month that it would allow electricity prices to rise to ease the worsening energy crunch. This will be a windfall for power producers resulting in both higher prices and greater generation volumes, wrote Huajin Securities analysts including Luo Wen.

The picture is mixed in China’s manufacturing sector, with companies’ performance dependent on their ability to pass on higher commodity costs.

That’s in stark contrast to companies which have had to bear cost inflation, like engine component maker Jiangsu Pacific Precision Forging Co., which reported a 34% drop in earnings.

The most resilient among mid-stream manufacturers — companies that make components of finished products — seem to be in the semiconductors, defense and renewables industries, where margins are on the rise, said CICC.

Food and beverage, apparel and appliance companies will land on the weaker end of the earnings spectrum after a protracted slump in consumption growth, fostered by continuing Covid flareups and a restrained monetary stance. CITIC Securities sees profit growth slowing around 85% in the third quarter for the sector. 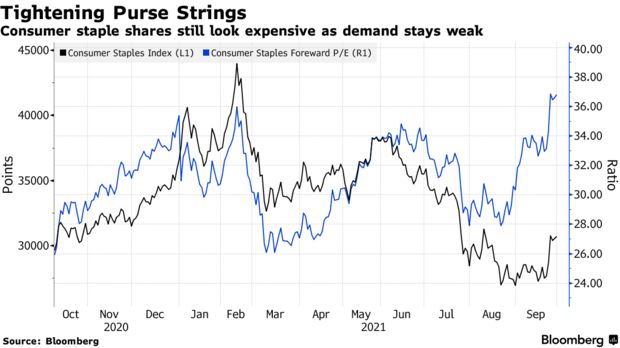 Among the worst-hit are agriculture firms as pork prices plummet, with less than a quarter that have reported so far seeing profit growth, Huatai said. Muyuan Foods Co. saw a net loss of 822 million yuan ($128.4 million) for the period, while Wellhope Foods Co. expect earnings to drop at least 94%.

The fourth quarter may provide some solace for consumer companies, as retail sales beat expectations in September, while authorities said pork prices will stabilize in the coming months.

The ongoing liquidity crisis enveloping China’s real estate firms has made it the sector with the worst profit deterioration in the third quarter, said Guosen Securities. More than half of property firms that have given preliminary projections expect a loss this season, the brokerage said.

With a drop in home prices in September for the first time in six years, developers should brace for more pain ahead. Gemdale Corp. reported a decline of 26% for third quarter earnings, while Financial Street Holdings Co. warned of a slump of up to 30%.

The sector contracted for the first time since the pandemic last quarter, as the debt crisis centered around China Evergrande Group, regulatory tightening and an anticipated property tax encouraged homebuyers to stay on the sidelines.