Chinese developers have suffered a meltdown of at least $90 billion in stocks and dollar bonds this year, with a bursting housing bubble and an intensifying debt crisis threatening to inflict even more pain.

Chinese builders have lost about $55 billion in share value since 2022 began, according to a Bloomberg Intelligence stock gauge. The sector’s dollar notes have fallen more than $35 billion, show calculations based on a Bloomberg bond index, the constituents of which can change over time. The wipeouts have pushed developer stocks down to levels not seen in a decade and China’s junk dollar notes to record lows.

Pessimism about the industry’s outlook has become more entrenched after Beijing signaled that homeowners, not builders, are the priority of current efforts to stabilize China’s slumping housing market. Longer term, an aging population and a policy shift that seeks to redefine real estate as a form of public goods means the sector’s boom era may have already passed. 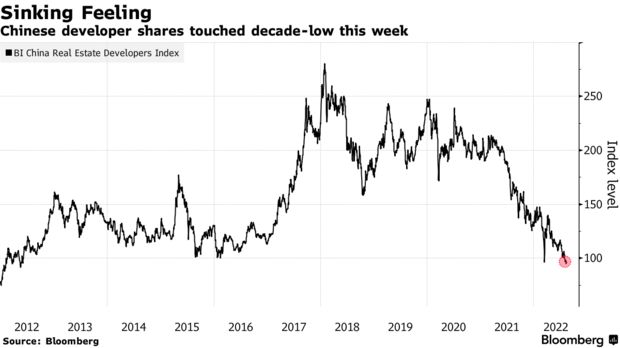 “The aim of the rescue measures is to save the property market and household confidence, but not the developers,” said Gary Ng, senior economist at Natixis SA, referring to Beijing’s recent moves to ensure completion of stalled projects. “As it is unlikely to see significant policy changes, the golden age of fast revenue growth and high leverage for property developers is probably over.”

Chinese builders’ fortunes have decidedly worsened this year following a relentless official campaign to curb their debt expansion and a year-long slump in home sales. This has led to an unprecedented cash crunch that is spreading risks to the financial system and also threatens social stability.

To investors’ disappointment, measures to shore up developers’ finances have been largely piecemeal. Steps have included a generalized call for banks to boost lending and slow progress on a reported plan to launch a state rescue fund. Instead, authorities appear more preoccupied with appeasing angry buyers of unfinished homes amid a rare boycott on mortgage payments.

After hitting its lowest level since 2012 earlier this week, the Bloomberg Intelligence gauge of Chinese property stocks has lost 27% this year, adding to a 34% decline for all of 2021 and in stark contrast to 80%-plus annual gains enjoyed earlier this century. 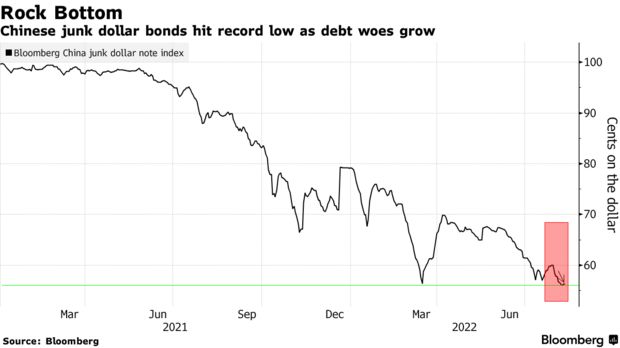 The pain is even deeper in the country’s high-yield dollar bond market, where developers still dominate and once had their debt counted as investor darlings. A Bloomberg gauge tracking the sector hit its lowest-ever level this week amid fresh signs of repayment struggle in the sector. Chinese borrowers have defaulted on a record $28.8 billion of offshore bonds this year, nearly all of that by builders.

The median dollar-bond price of Chinese real estate firms was 16 cents, versus 40 cents in March, with about 80% of issuance trading below 50 cents, Bloomberg Intelligence estimated in late July. These so-called distressed levels reflect investors’ low expectations for getting their money back on time.

With yields around 25%, this once-vibrant offshore market is virtually inaccessible to Chinese developers. And while high-grade borrowers such as China Vanke Co. remain able to tap cheap domestic funding, they are no longer appealing to many investors either given bleak long-run prospects the industry faces.

“There is no polarization between better-quality and distressed developers anymore,” said Carl Wong, head of fixed income at Avenue Asset Management Ltd. “It is domino falling.”

As economic and population growth slows, China’s property market will likely face an irreversible glut in coming years. Top leaders’ repeated pledge that housing is for living and not for speculation, as well as a campaign to ramp up the supply of public housing, means real estate will no longer be a high-margin business.

“Longer term, there will be a change in the real estate business model,” said Andrew Chan, a credit analyst at Bloomberg Intelligence. “The industry may turn out to be more state-dominated, so in a sense property prices could be ‘controlled’ — which is in line with the Chinese goal of social stability and quelling social inequality.”

Chinese firms should face faster US stock delisting over…