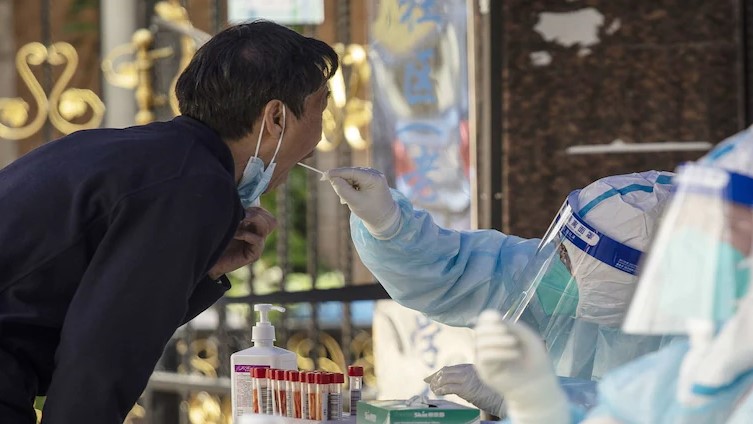 A widespread selloff in China is rippling through emerging markets, threatening to snuff out growth and drag down everything from stocks to currencies and bonds.

Fresh Covid outbreaks — and the government’s stringent policy to contain them — are spooking global investors who fear shutdowns in China will echo across the world by lowering demand and disrupting supply chains. That’s pushing them to sell not just China’s currency, bonds and stocks but the assets of any developing nation that relies heavily on trade with the world’s second-biggest economy.

The result is the sharpest slide in emerging markets in two years, not unlike the meltdown in 2015 when China’s woes led to a rout in their bonds and currencies, besides wiping out $2 trillion from equity values. Since then, the country’s influence on the global economy has only grown: It’s now the largest buyer of commodities, meaning its slump may impact exporters of raw materials and their markets more than ever.

“Given China’s importance in global supply chains and importance to global growth prospects, further disappointments in the nation’s growth may lead to more contagion risk,” Johnny Chen and Clifford Lau, money managers at William Blair Investment Management in Singapore, wrote in an email. “We see countries with high trade linkages to China as being the most vulnerable.” 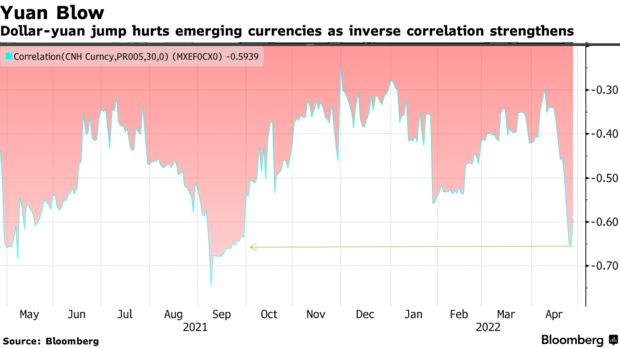 As armies of white-suited enforcers descended on Shanghai and Beijing in late April to oversee the mandatory testing of millions, the offshore yuan sank to the worst monthly loss in at least 12 years. The MSCI Emerging Markets Currency Index, with almost a 30% weight for the Chinese currency, tumbled in tandem. The yuan’s 30-day correlation to the index rose to the strongest level since September, underscoring the currency’s influence in the emerging-market selloff. After Shanghai reported its first deaths since the latest outbreak, panic selling spread to bonds and equities.

The scale of the losses prompted Chinese authorities to step in and assure markets they’ll support the economic recovery and boost infrastructure spending. They also signaled willingness to resolve regulatory issues in the technology sector. These pledges soothed investors’ nerves even though authorities didn’t abandon the stern Covid Zero policy that had sparked the panic in the first place. While the last trading day of April did see a rebound in the yuan, most analysts expect the currency to resume its slump.

The offshore yuan dropped 0.6% to 6.6827 per dollar on Monday. China’s local markets are shut for a holiday.

Beijing’s 2022 growth target of 5.5% is now in question, prompting analysts from Standard Chartered Plc to HSBC Holdings Plc to predict currency losses over the next three months. That, in turn, could lower growth rates in countries like South Africa and Brazil, just when they’re also buffeted by higher U.S. yields, an inflationary spiral and the war in Ukraine.

“If China’s economy slows significantly, emerging markets currencies as well as the yuan could experience a period of elevated and persistent volatility,” said Brendan McKenna, a currency strategist at Wells Fargo Securities in New York.

The rand erased four months worth of gains in just two weeks, while the Brazilian real, Colombian peso and the Chilean peso posted some of the sharpest declines among peers. Carry-trade losses ballooned, capping the worst showing since November.

“We continue to maintain a cautious stance on Asian currencies, and expect more volatility till the time some of these growth concerns abate,” Prashant Singh, senior portfolio manager for emerging-markets debt at Neuberger Berman in Singapore.

Currency losses are also driving a selloff in local bonds, which sank to the worst first four months of a year on record, as performance in April alone was the worst since the peak of the pandemic in March 2020. The main drag here was China again, with a 41% weight in the Bloomberg index for the asset class. The nation’s bonds posted the biggest monthly retreat since the 2008 financial crisis, while sparking double-digit losses in countries as varied as South Africa, Poland and Chile.

Equities weren’t spared either. A rout in Chinese technology shares listed in Hong Kong echoed half a world away in Johannesburg. Naspers Ltd., which owns 28.8% in Tencent Holdings, plunged to a five-year low. A three-week slump partly fueled by panic over Covid cases in China (and partly by rising U.S. yields) led emerging-market stocks to erase $2.7 trillion in market value.

China’s economic activity contracted sharply in April as the lockdown of Shanghai escalated concerns about further disruption to global supply chains. Factory activity fell to the lowest level in more than two years, with the official manufacturing PMI dropping to 47.4 from 49.5 in March, according to data released by the National Bureau of Statistics on Saturday.