ARK Invest CEO Cathie Wood has sold off nearly all of the exposure to China in her flagship fund and other actively managed ETFs amid Beijing’s growing regulatory crackdown on foreign-listed Chinese stocks.

With Beijing clamping down on the Asian nation’s companies that trade in foreign exchanges, Wood has become a clear seller of U.S.-listed Chinese stocks.

For example, Wood’s ARK Innovation ETF has dumped all of its positions in China-based JD.Com, Tencent Holdings and all but a small stake in KE Holdings Inc., according to the company’s daily update.

Wood had been shedding her China positions over the past two weeks, as she recently revealed in ARK’s monthly webinar for investors.

Still, Beijing’s crackdown on U.S.-listed Chinese stocks has helped pull down ARKK’s price by 10.94% since July 1. 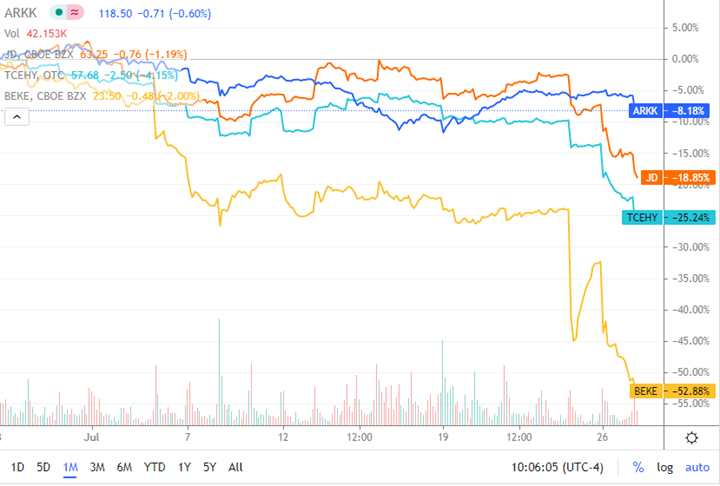 Chinese stocks are tumbling as Beijing’s crackdown against foreign-listed companies continues to expand.

Alibaba: Don’t Worry About The ADRs

Xiaomi Auto’s First Prototype to Be Unveiled in Q3