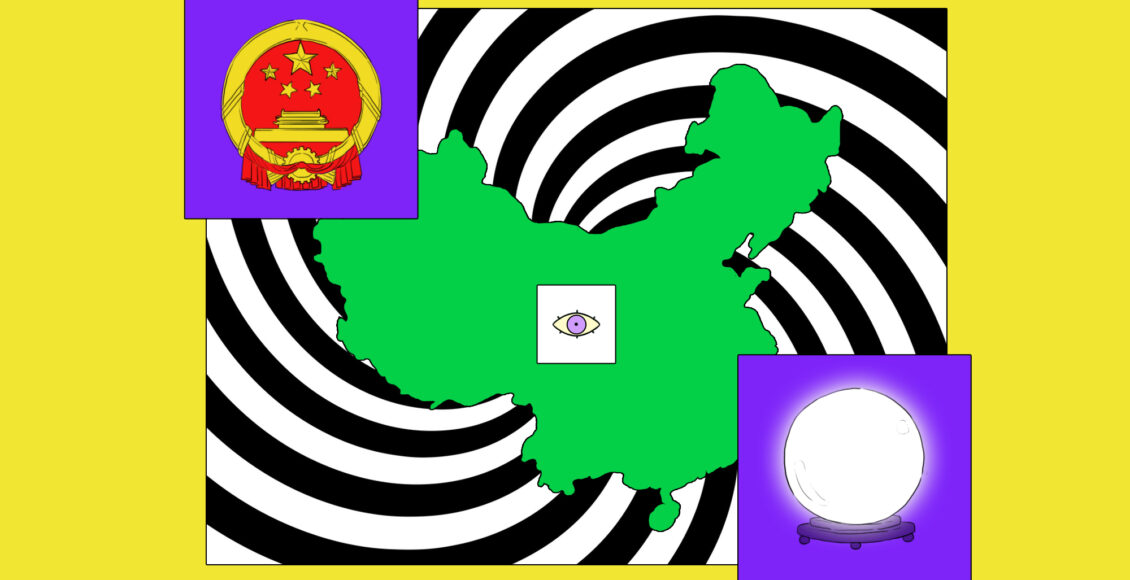 Much of the political maneuvering within the Communist Party of China occurs behind closed doors, off-limits even to state media and most Party cadres. But new technologies like prediction markets and crowd forecasting may improve our understanding of politics in the world’s second-largest economy. Political analyst Neil Thomas explains a new experiment.

The most important fact about Chinese elite politics is that there’s a lot we don’t know.

China is an authoritarian country governed by a communist party that operates a sophisticated propaganda apparatus and exercises tight control over the information environment. It is virtually impossible to glean unfiltered insight into the personal beliefs, political networks, and policy deliberations of the leadership that oversees the world’s second-largest economy.

This information vacuum creates uncertainty and political risk. Many analysts believe that China’s current leader Xí Jìnpíng 习近平 will rule for life. Others think the party may force Xi to name a successor. Some even argue that insiders will launch a coup against him. Concrete evidence like personnel movements and policy documents can only yield a limited range of conclusions.

But two emerging technologies may help to improve our guesswork. Crowd forecasting, championed by the political scientist Philip E. Tetlock in the books Superforecasting and Expert Political Judgment, pools the views of numerous attentive amateurs to produce predictions that routinely beat those of individual experts. Prediction markets, advocated by economists like Tyler Cowen and Robert Shiller, are contracts that let people bet on the outcome of real-world events, like a congressional election or the vaccination rate in six months’ time.

Both approaches build on the insight that involving more people will bring more information to a question. And, in the case of prediction markets, those are people who are willing to stake money on their beliefs. At their best, these tools can provide reasonable probability estimates for specific events that matter to policymakers and investors. While neither is a silver bullet that pierces the black box of Chinese politics, their aggregation of opinion could help analysts be less wrong in their conjectures. And we need all the help we can get.

So how exactly can we apply crowd forecasting and prediction markets to Chinese politics?

The most significant event on the Chinese political calendar is the quinquennial National Congress of the Communist Party of China (CPC). This meeting brings thousands of delegates to Beijing to hear a major policy report by the CPC General Secretary, to approve amendments to the CPC Constitution, and to select the 370-odd members of the next CPC Central Committee. The 20th Party Congress will likely meet in October or November of 2022.

Then the true action starts. Immediately following the Party Congress, the new Central Committee will hold its first plenary session, at which it will select an elite 25-member Politburo, the 7-member Politburo Standing Committee (PBSC), and the top leader as General Secretary. The politicians who fill these positions wield enormous power in Chinese policy making, so forecasting the outcome of these leadership decisions has market value.

Predicting the PBSC line-up is a favorite “parlor game” of China watchers because intra-party negotiations on leadership appointments are maddeningly opaque. These predictions often go awry. In the lead up to the 19th Party Congress in October 2017, two of the hottest rumors were that Premier Lǐ Kèqiáng 李克强 would be ousted and corruption czar Wáng Qíshān 王岐山 would stay on the PBSC past the normal retirement age. Both were wrong. That’s why the next Party Congress presents a useful test case for prediction markets and crowd forecasting in Chinese politics.

So, working with China technology analyst Jordan Schneider, I helped two leading platforms set up China forecasts. PredictIt, a non-profit venture of the Victoria University of Wellington, offers prediction markets that let you (legally) wager money on the outcome of real-life political events. Foretell, an initiative of the Center for Security and Emerging Technology at Georgetown University, is a crowd forecasting project focused on technology and security policy. The rest of this article explains the questions we asked and why they are important.

Xi Jinping became General Secretary after the 18th Party Congress in November 2012 and won a second term at the 19th Party Congress. The expectation, both inside and outside the CPC, was that he would follow the example set by his predecessors Hú Jǐntāo 胡锦涛 and Jiāng Zémín 江泽民 of stepping down from the top role after serving two full five-year terms. This belief was reinforced by a nascent norm that leaders aged 68 or older in the year of a Party Congress had to retire from the Politburo. In 2022, the year of the 20th Party Congress, Xi will turn 69.

But Xi moved quickly to reverse a trend toward “collective leadership” in the CPC and has become the “core leader” of a far more personalized political system. He crippled rival power centers , elevated close associates to key positions, centralized decision-making in powerful commissions that he controls, and reestablished authority over the armed forces. In March 2018, the legislature scrapped term limits for the Chinese presidency (the position Xi holds as head of state), removing the only formal barrier to Xi serving as leader indefinitely.

These developments lead many analysts to argue that Xi will secure a norm-defying third term as General Secretary. Others contend that Xi’s position is more precarious because his policies — which target rival elites, suppress civil society, slow economic growth, and alienate other countries — could generate a backlash within the CPC against his continued rule. Either way, the outcome of the 20th Party Congress will have a profound impact on China’s future.

The markets are currently very confident that Xi will stay on as General Secretary. PredictIt punters put his chances of keeping the top job at 94%, while Foretell forecasters believe on average that there’s an 87% chance that he continues in the role.

Click here to forecast the outcome with Foretell or see the current odds.

Click here to forecast the outcome with PredictIt or see the odds.

Will Li Keqiang remain on the Politburo Standing Committee?

Li Keqiang has been the second-ranked PBSC member after Xi since the 18th Party Congress and has served as Premier of the State Council since March 2013. During the 1990s and 2000s, Li and Xi were both rising stars in the CPC. Xi was from an elite political family and won the favor of former leader Jiang Zemin, while Li’s power base was the now-hobbled Communist Youth League (CYL) that nurtured Jiang’s successor, Hu Jintao. In the end, Xi proved more popular with Party elites, but apparent factional balancing saw Li win the number-two position.

Li is constitutionally barred from serving another five-year term as Premier. But he will only turn 67 in 2022, and so falls within the age norm for reappointment to the PBSC. As it’s uncommon for senior leaders to retire early, it’s possible that Li will remain on the PBSC but move to a different role. This scenario could indicate that Xi feels he must still placate other power groupings, at least to some extent. If Li retires, it could be a sign of Xi’s continued consolidation of power, and a further blow to any semblance of power held by the CYL.

Li’s odds are dead even, going by the wisdom of the masses. The crowd forecast on Foretell is that he has a 50% chance of remaining on the PBSC.

Will Chen Min’er win promotion to the Politburo Standing Committee?

Chén Mǐn’ěr 陈敏尔 is tipped by some experts as a key figure in the next generation of political leaders. He presently sits on the Politburo as CPC Secretary of Chongqing, a position that preceded PBSC membership for Hè Guóqiáng 贺国强, Zhāng Déjiāng 张德江, and Wāng Yáng 汪洋.

Having headed the provincial propaganda department when Xi was Zhejiang Party Secretary from 2002-2007, Chen is viewed as a protégé of Xi, who prefers to promote people he knows personally. Turning 62 next year, Chen is young enough to serve two PBSC terms under prevailing retirement age norms.

If Xi exempts only himself from these norms — exceptions were not granted to close allies like Wang Qishan at the 19th Party Congress — then at least two current PBSC members will retire in 2022. Considering that new PBSC members are almost always selected from the previous Politburo, Chen seems to be one of nine contenders for the two vacancies. While his elevation would confirm Chen’s closeness with Xi, it could also spark speculation about him being a successor to Xi, a scenario that the General Secretary may wish to avoid.

The internet backs Chen for a promotion. He has a 78% chance of making it to the next PBSC, according to the crowd forecast on Foretell.

Will Hu Chunhua win promotion to the Politburo Standing Committee?

Hú Chūnhuá 胡春华 has been a rising star in Chinese politics for many years. He serves on the Politburo as one of four Vice Premiers of the State Council, the administrative leadership body of the Chinese central government. He is the youngest Politburo member — he will turn 59 in 2022 — and is the only Vice Premier not due to retire in 2022. That makes him the obvious candidate to succeed Li Keqiang as Premier and join the PBSC. Since the late 1980s, a new Premier has always been selected from among the current Vice Premiers.

But Xi’s selective approach to CPC norms and preference for elevating personal allies has cast doubt on Hu’s political future. Hu is not seen as being especially close to Xi, and his political rise was linked to the CYL faction. Xi may therefore seek to block Hu’s ascension to the PBSC or allow Hu to join the PBSC but in a position below that of Premier. If Hu becomes Premier, it could signal that Xi’s power is more constrained by CPC norms than previously thought, or that the role is now considered so powerless that its occupant is not a political threat.

Hu’s fortunes are in the balance, but bettors believe his elevation is more likely than not. Foretell puts the likelihood of Hu entering the PBSC at 61%, while the PredictIt market has recently turned bullish and currently suggests a 72% probability.

Click here to forecast the outcome with PredictIt or see the odds.

Do you agree with the current market consensus on China’s next leaders? Crowd forecasting and prediction markets work better if they can pool many predictions by a large group of people who have some knowledge of the topic at hand. The more China specialists who participate in these initiatives, the more accurate the forecasts should become. But, as ever, the only certainty about the next Party Congress is that some surprises will be in store.