Blockchain ambitions: will China get the first-mover advantage with the wide adoption of the digital yuan? 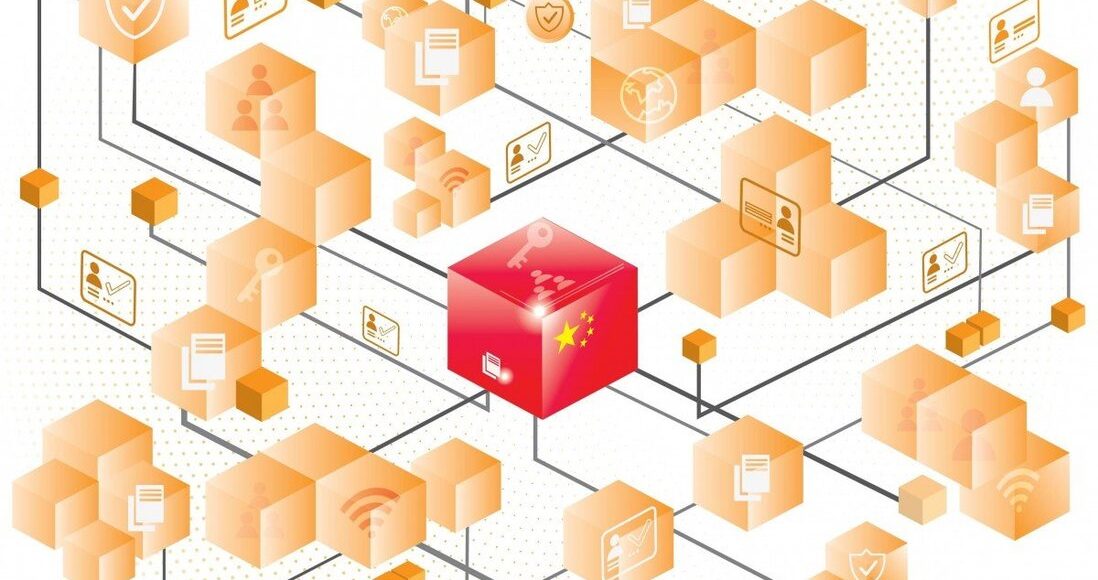 There is no stage bigger than the Olympics, for the athletes and the host country. Modern China announced its arrival 13 years ago when 2,008 synchronised drummers wowed the world at the Beijing Summer Olympics opening ceremonies.

In February, China is expected to use the Beijing Winter Olympics to unveil a home-grown marvel of intense international interest: the digital yuan, the first major central bank digital currency, or CBDC.

Consumers are unlikely to notice much difference shopping with e-CNY, as the currency is officially known. It will be worth the same as cash and will activate with a tap, swipe or QR code. But the questions this form of money raises are profound. How will state-sponsored digital money affect China’s economy, its trading relationships and – most weighty of all – the future of the global financial system now dominated by the United States and the dollar?

“The question is not whether China’s CBDC will upend the current rules of global trade and commerce,” said Pauline Loong, director of Hong Kong-based research consultancy Asia-Analytica. “The only question is how far-reaching the ramifications will be across issues related to who controls access to capital and its movements.”

But for all of the digital yuan’s consequences, it is a toe peeking out from a giant red curtain. Behind is an ambitious and largely invisible infrastructure programme to rewire the country and its economy with distributed ledger technology known as blockchain. China has moved deliberately to secure first-mover advantage in what it believes is the future of the internet.

If the digital yuan is Beijing’s tender for the digital frontier, its blockchain initiative is its bid to build the railroads. 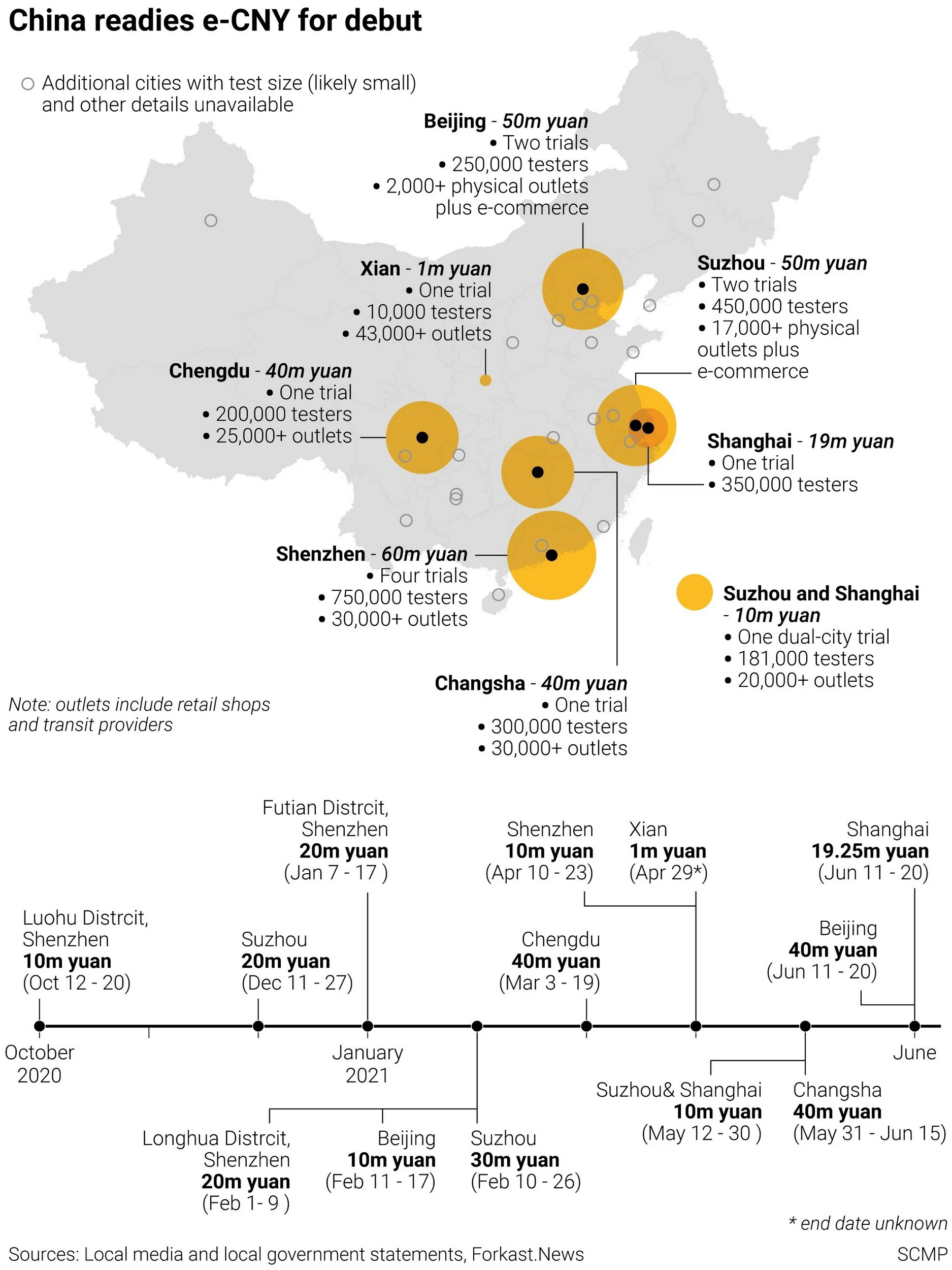 The story of how China came to settle the technological frontier begins with the 2008 financial crisis. Just one month after the Summer Olympics, an underregulated US financial sector tripped the world into recession.

It was a vulnerability that China decided it was no longer willing to accept. As the crisis was unfolding, then President Hu Jintao called upon like-minded nations at the G20 summit to “steadily promote the diversification of the international monetary system.”

Receiving a muted response, China forged alone in the daunting task of creating parallel institutions to those dominated by the US.

In 2010, when Washington’s sanctions effectively locked Iran out of the international financial system, China’s focus on cross-border currency flows intensified.

By then, domestic concerns were spurring creative thinking around monetary policy. One was how to get 400 million “underbanked” Chinese out of poverty. E-commerce giant Alibaba Group Holding introduced a mobile payment system in 2008, taking advantage of the country’s high rates of smartphone adoption, which would top 800 million by 2015, according to the Pew Research Center. But such private payment systems left the People’s Bank of China on the sidelines and did little for rising Communist Party leader Xi Jinping’s anti-corruption crusade, which required closer state monitoring of money.

Then, around 2012, regulators began to observe strange patterns in power grids across the country. From Xinjiang to Inner Mongolia, huge amounts of electricity were surging into warehouses packed with powerful computers and colossal servers. The processors were crunching numbers to produce – or “mine” – a new kind of money called Bi’tebi in Mandarin. At their peak in the late-2010s, Chinese miners are thought to have produced 95 per cent of the world’s Bitebi , or bitcoin.

This money had no connection to a bank, or any centralised authority at all. It was entirely digital and uniquely secure. Every transaction was recorded on a long series of distributed ledgers, or blocks, and broadcast to every computer within a network for confirmation. 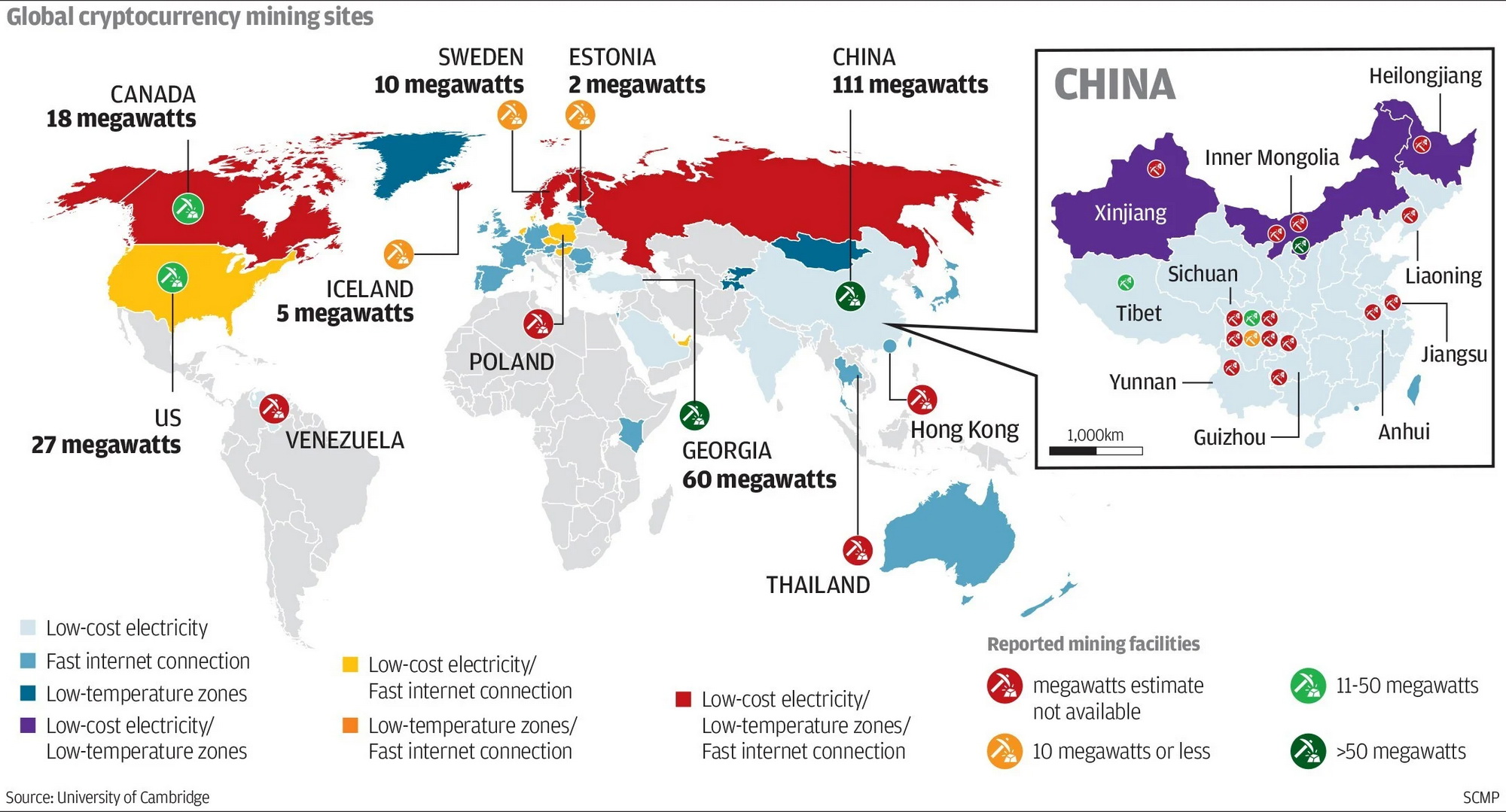 China grasped the implications of this unregulated activity immediately. In 2014, the People’s Bank of China (PBOC) began studying the possibility of a government version of bitcoin. With each passing year, the disappearance of paper yuan from the economy made the idea more plausible. By 2019, PwC reported, 96 per cent of Chinese regularly shopped online.

“Before many governments even knew the basics of bitcoin, Chinese authorities started to take leadership in the security of the network on the mining side,” said Ian Wittkopp, vice-president at Beijing-based Sino Global Capital. “This led to the development of a strong blockchain and cryptocurrency ecosystem.”
By October 2020, the digital yuan was ready for pilot testing among China’s masses. All told, 750,000 people chosen by lottery were given 150 million e-CNY (US$23 million) to spend at roughly 70,000 bricks-and-mortar businesses plus a slew of online retailers.

Six months later, new trials allowed open participation. This marked the first monitored release of the digital yuan into the wild. By June, nursing homes in Chengdu were teaching elderly residents how to use the new money.

Such care and expense are necessary to ensure the Olympics debut is as well-rehearsed as those 2,008 drummers, according to Peter Cai, who studies China’s economy and trade policy at the Lowy Institute in Sydney.

“The cost of getting something wrong on this is tremendous,” Cai said. “Chinese officials are right to talk about the digital currency as if it’s a new frontier. What are the full implications for financial, banking and payment systems, or the conduct of a monetary policy? I don’t think anybody has a firm grip on that. And that includes China.”

During two decades of historic economic growth, China has had a mixed record on high technologies. It has struggled to attain self-sufficiency – never mind dominance – in the production of semiconductors and chips. It was ahead of the curve on 5G broadband, but lags behind the West in fields of arguably greater strategic value, such as artificial intelligence.

When it comes to blockchain, China appears to have built a formidable lead in a technology of consequence. After President Xi in 2019 promised blockchain would “lead the next wave of the digital transformation of China,” thousands of companies reportedly initiated blockchain projects related to everything from retail banking to global shipping and supply chains.

This profusion of activity continues apace. “It’s a field of one,” said Wittkopp. “No other country is even close.” 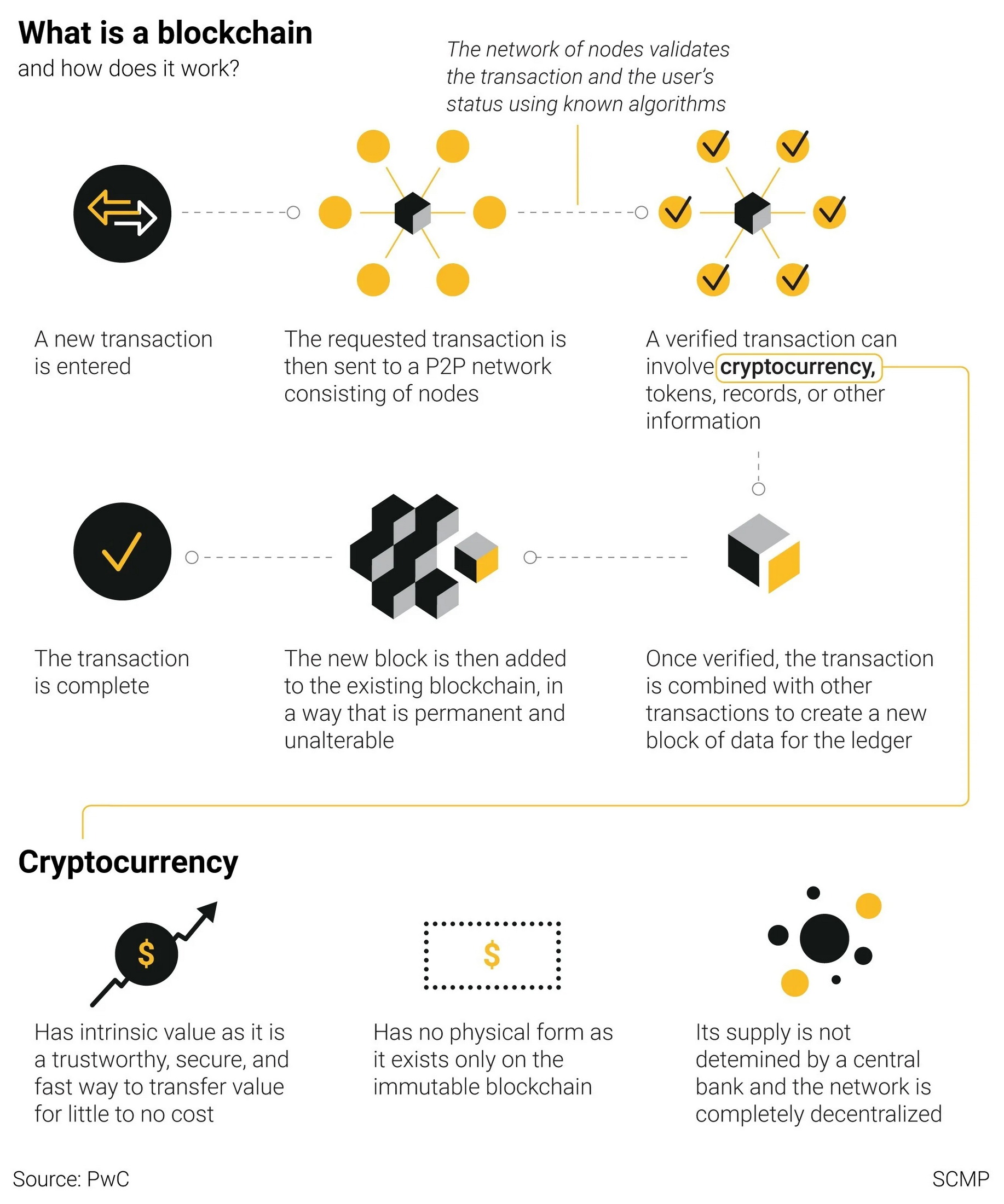 These projects are transforming a digital ecosystem that was already among the world’s most sophisticated, according to a recent McKinsey study. China has 850 million internet users and more than a quarter of the world’s most successful start-ups.

One of them is Hangzhou-based Ant Group. The financial services giant has over 50 blockchain-based decentralised apps, or dapps, in areas such as shipping, insurance claim processing and charitable donations. Internet search firm Baidu, the Google of China, has 20 dapps, including one that has handled 35 million pieces of electronic evidence for China’s “Internet Court.”

It’s not just tech companies staking territory on the blockchain frontier. A division of the Industrial and Commercial Bank of China has developed dapps for retail and corporate use. Insurance giant Ping An uses them to finance public-works projects. A dapp used by the China Construction Bank has helped local banks facilitate US$134 billion in loans.

“Blockchain will make our tech and our society work better,” said He Yifan, blockchain evangelist and CEO of engineering firm Red Date Technology. “It can make all the IT systems in the world communicate like they are in one room.” He predicts in 10 years all transactions that require more than two parties will be blockchain based.

The state of blockchain today is like the internet of 1993, He said. Back then, most companies could not afford the entry costs of the nascent internet (which began as a public infrastructure project overseen by the Pentagon).

In April 2020, China formalised its bet on blockchain by creating the Blockchain-based Service Network, or BSN, managed by Red Date. It is an infrastructure platform that allows private entities, especially small and medium-sized businesses, to overcome the two biggest barriers to entry – interoperability and prohibitive costs.

“We built everything for you already, you just connect to it and work on your smart contract,” said He, who claims the development cost of a simple dapp within the BSN could be as little as 1 per cent of commercial blockchain. 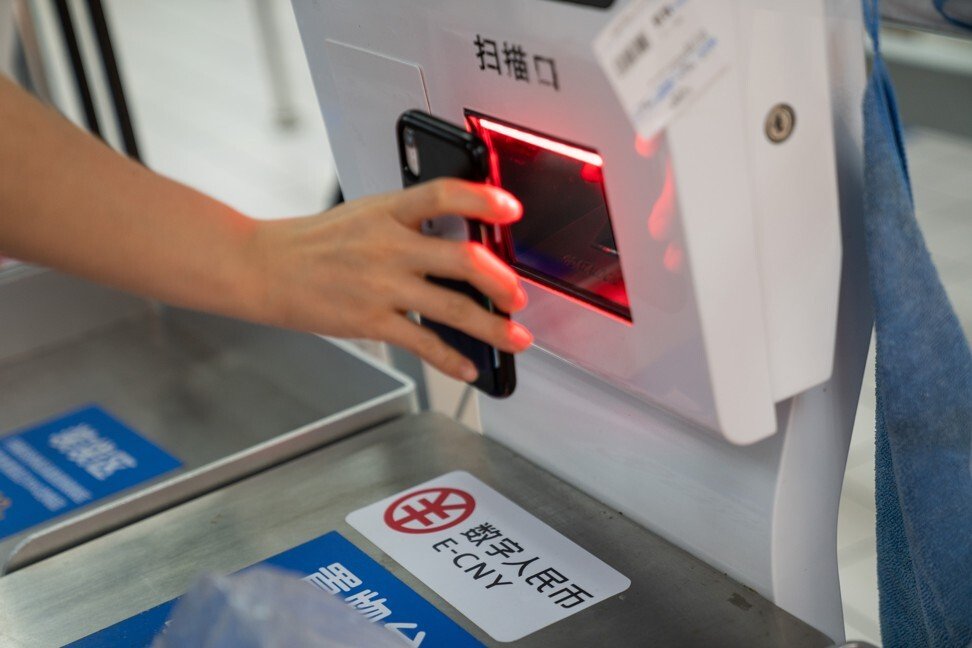 By its first anniversary in April 2021 the BSN had attracted 20,000 users and more than 2,500 projects across 120 “nodes” throughout China plus Johannesburg, Northern California, Paris, São Paulo, Singapore, Sydney and Tokyo.

S-Labs, a Beijing start-up, used it to develop applications that have helped over 5,000 SMEs find more than 500 million yuan in loans during the pandemic. S-Labs’ chief technology officer Li Ming said the BSN is easy to use because it meets Chinese government standards and helps them find customers. “The biggest convenience of BSN is its brand effect,” Li said.

And if He has his way, today’s youth will be the first blockchain-native generation. This fluency is already being developed in high schools where the BSN is exploring how to teach students, including by holding programming contests with cash prizes.

“Blockchain should be a basic skill,” said He. “The idea is to help more people become comfortable using the technology.”

In June, Red Date closed on US$30 million in Series A funding that was notable for its global reach. Major investors from Saudi Arabia, Switzerland and Thailand took part, showing widespread support for China’s leading efforts.