The firm had held a “modest overweight” view on Chinese assets as attractive valuations made up for the risks, BlackRock Investment Institute strategists including Jean Boivin and Wei Li wrote in a note Monday. But the firm is now recommending a neutral stance on Chinese stocks and bonds as the response to the pandemic takes a growing toll.

“The rapidly worsening outlook for China’s growth on widespread lockdowns to curtail a Covid spike has changed this,” they wrote. “Lockdowns are set to curtail economic activity. China’s policy makers have heralded easing to prevent a growth slowdown — but have yet to fully act.”

China’s draconian Covid restrictions have resulted in lockdowns in Shanghai and other cities that are exerting a major drag on the economy, the world’s second largest. Concern over the nation’s outlook sent the yuan plunging more than 1% against the U.S. dollar in China on Monday while a Bloomberg gauge of major stocks tumbled almost 3%.

The onshore yuan extended its decline for a fourth day Tuesday, down 0.1% to 6.7388 per dollar, the lowest level since November 2020. On Monday, China’s central bank in its quarterly monetary report repeated a pledge to be proactive in addressing mounting economic pressure and boosting market confidence. 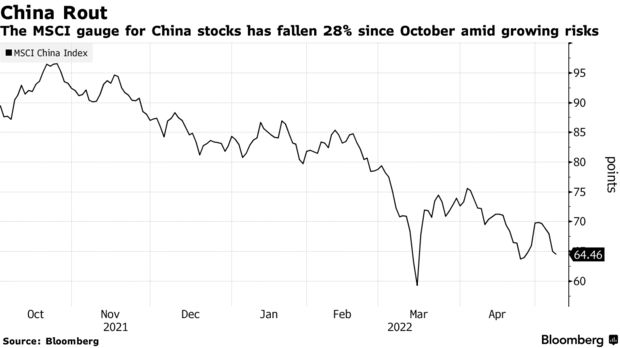 Global investors have also pulled out of China’s capital markets since Russia’s invasion of Ukraine, worried that Beijing may become drawn into the economic sanctions battle that the U.S. and Europe is waging against Russian President Vladimir Putin’s administration.

China’s top leaders warned against questioning its zero-tolerance Covid policy last week, saying the epidemic-control strategy is “scientific and effective,” “determined by the party’s principles” and “can stand the test of history.”

In October, BlackRock’s strategists turned “modestly positive” on China and upgraded their ratings on the country’s stocks to “overweight,” saying a gradual dovish shift in monetary and fiscal policy to counter the economic slowdown would help lift the market. They had expected that the regulatory clampdown in China would become less intense.

Instead, the MSCI China Index has lost 28% since the beginning of October, compared with a decline of 11% in MSCI’s global benchmark. While Chinese policy makers have started easing monetary and fiscal policies, Beijing’s strict Covid policy and its stance on Russia-Ukraine war shook money managers’ confidence.

“We see a growing geopolitical concern over Beijing’s ties to Russia,” they wrote. “This means foreign investors could face more pressure to avoid Chinese assets for regulatory or other reasons.”

A gauge of the nation’s government bonds, meanwhile, has lost 3.6% in dollar terms so far this year. Yields on U.S. Treasuries have surpassed their Chinese counterparts as the Federal Reserves tightens monetary policy to reign in inflation. That’s “eroding their previous appeal as a source of potential coupon income,” according to the note.

6 takeaways from China’s ‘two sessions’ and the economic…