Beyond Didi: Watch These Homecoming China Stock Listings in 2022 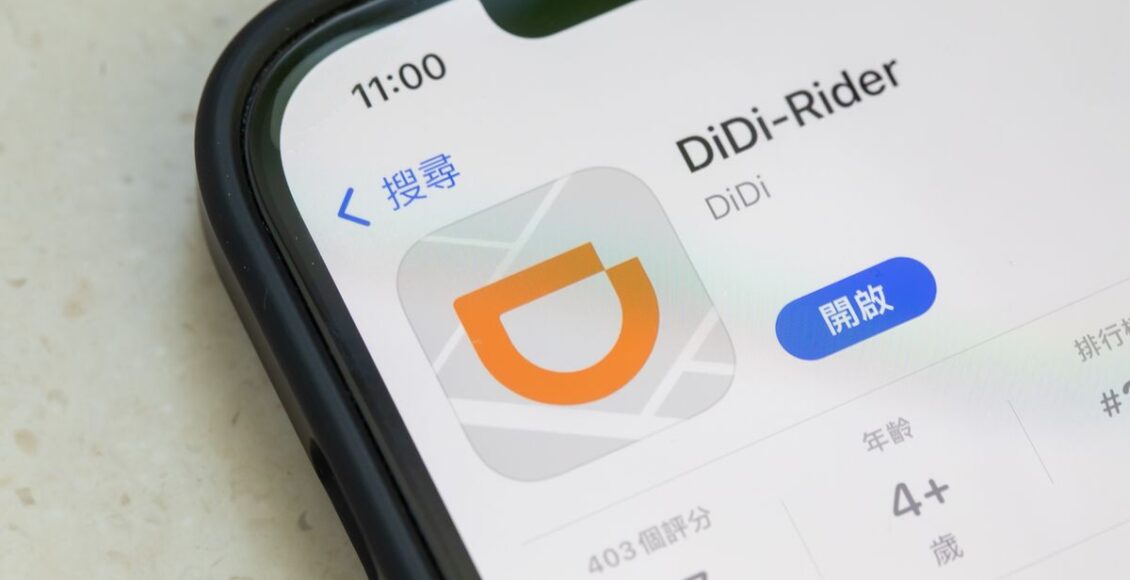 With Didi Global Inc. seeking a listing in Hong Kong less than a year after its tumultuous debut in New York, investors are looking for other U.S.-traded Chinese names that could potentially offer shares closer to home amid regulatory pressures.

Such so-called “homecomings” are a hot topic in the Asian financial hub as U.S. authorities step up demands over disclosures and Chinese officials seek to reel in overseas offerings citing security concerns. Listing in Hong Kong is seen as an alternative for firms wanting to retain access to global investors while being more palatable to Beijing. It is also simpler and quicker than a mainland deal.

The regulatory threats mean companies with a total market cap of almost $200 billion currently listed only in the U.S. may need to seek a return to Hong Kong or the mainland soon, Bloomberg Intelligence analysts Matthew Kanterman and Tiffany Tam wrote in a note. A list compiled by Bloomberg News includes Pinduoduo Inc. and Nio Inc. among the largest names. 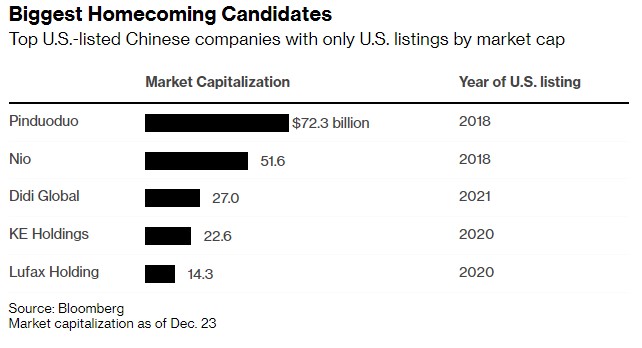 Didi could file with the Hong Kong Stock Exchange around March, people with knowledge of the matter have told Bloomberg News. It is poised to join over a dozen Chinese firms that have already completed second listings in the city after making global debuts through American depositary receipts, including JD.com Inc. and Alibaba Group Holding Ltd.

“Many of the big mutual funds are in the process of or have converted the majority of their ADR exposure into Hong Kong shares for stocks which are currently dual listed, suggesting a natural migration to Hong Kong is taking place,” said Alex Abagian, co-head of Asia Pacific equity capital markets at Morgan Stanley.

Below are the U.S.-traded companies that could come up with homecoming listings:

The e-commerce operator is the biggest Chinese company by market capitalization listed only in the U.S. Founded by Colin Huang, it has been one of the few major internet giants to escape a direct hit from Beijing’s wide-ranging tech crackdown. The firm’s ADRs rose to a record high in New York in February, but have slumped about 70% since amid a selloff in Chinese shares globally.

The electric-vehicle maker could be set to follow peers XPeng Inc. and Li Auto Inc., which launched second primary listings in Hong Kong this year. Nio this month unveiled its second sedan, which will compete more directly with Tesla Inc.’s most popular Model 3. Its ADRs are down about 50% from their February all-time high.

The Beijing-based online housing platform was a target of short-seller Muddy Waters Research this month. KE said the report is “without merit” and that it has authorized an internal review of Muddy Waters’ key allegations. The impact has been minimal on the ADRs, which were already down more than 70% from a record high in February.

The Beijing-based owner of online recruitment platform Boss Zhipin surged in its U.S. debut in June, and has managed to trade well above listing price since then despite the volatility that has dominated Chinese names. Its ADRs are up 73% since listing. (Market cap $13.5 billion)

The music entertainment company, a rival to NetEase Inc.’s Cloud Village Inc., debuted in New York over three years ago. The firm is well-positioned to capture a piece of the burgeoning $800 billion metaverse market through its virtual concert business, according to Bloomberg Intelligence. Its ADRs have fallen 80% from a March peak to about half of their 2018 IPO price. (Market cap $11 billion)

The Chinese online brokerage is planning to file for a Hong Kong listing that could raise about $1 billion, IFR reported in October. Its ADRs have fallen nearly 80% from a February record high though they’re still trading at about three times their March 2019 IPO price. (Market cap $6 billion)

The video-entertainment service operator has slumped over 80% since late March, hit by fears that Chinese tech giants would be kicked off U.S. bourses. The Baidu Inc. subsidiary was said to have picked banks for a Hong Kong second listing, according to a Bloomberg News report in October. (Market cap $3.9 billion)