Semiconductor equipment makers from Japan and China were among the biggest winners of Asia’s stock market in 2021, doubling their valuation from the end of last year amid robust demand for high-tech manufacturing.

Following last year’s COVID-driven stock market boom, which generated high-flying digital companies, Asian stock markets had a relatively tough year in 2021, with China’s regulatory crackdowns weighing on many of the country’s – and the region’s – most significant stocks. But global chip demand has given rise to some lesser-known companies, with logistics and financial companies also growing as the economy gradually recovers from the pandemic.

Nikkei Asia compared changes in market capitalization of about 600 of the largest Asian companies that had a valuation of $10 billion at the end of 2020, based on QUICK-FactSet data as of Dec. 21. About 50% of them increased in value, while the other 50% lost over the 12 months.

Among the top winners was Japan’s Lasertec, whose market capitalization rose 162% this year to 2.9 trillion yen ($26 billion).

Lasertec is a niche player in the semiconductor industry, manufacturing an inspection device for photomasks – a tool for creating a circuit pattern on silicon wafers. The device makes sure that the photomask patterns are accurate and defect-free. An almost exclusive supplier of such devices for cutting-edge masks called EUV, Lasertec has drawn investors’ attention throughout the year. 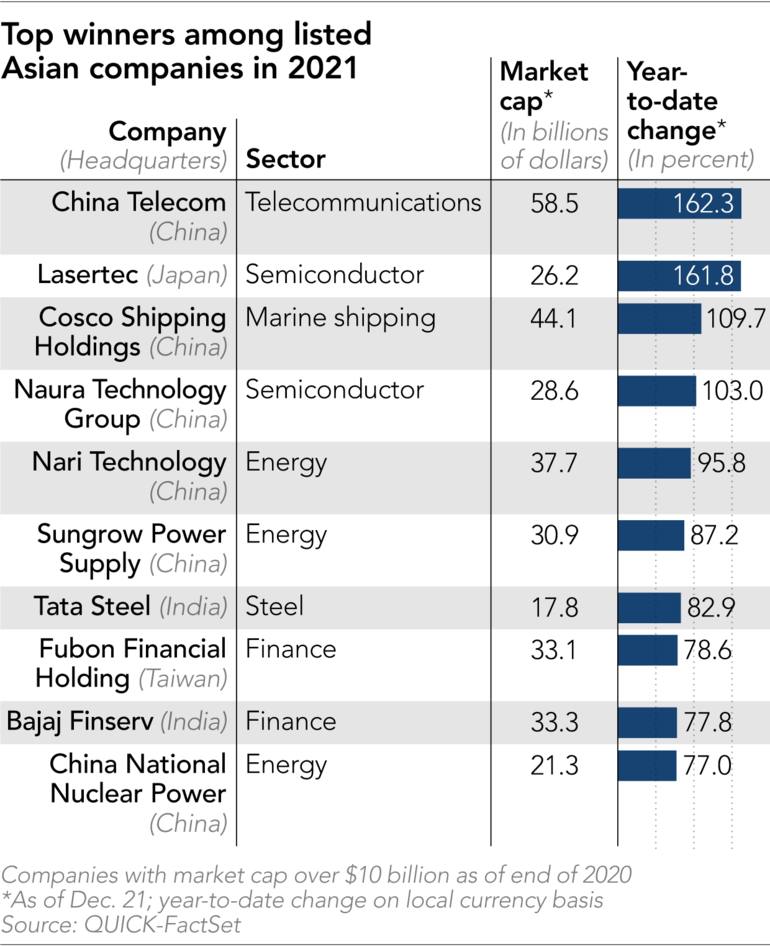 China’s state-backed Naura Technology Group, its largest maker of chip equipment, increased its market value by 103% to 182 billion yuan ($28 billion). In the first nine months of 2021, its net profit more than doubled on the year to 658 million yuan.

A rival of Applied Materials of the U.S. and Tokyo Electron of Japan, Shenzhen-listed Naura raised 8.5 billion yuan last month through a private placement to expand production capacity and enhance research and development. Such a move reflects President Xi Jinping’s call for self-reliance in high technology.

Yet overall, Asian stocks underperformed global stocks in 2021. The benchmark MSCI All Country Asia Index dropped 1% this year as of Dec. 21, versus a 17% rise by the MSCI All Country World Index.

“All this year, the most dominant local story for Asia stocks has been China, and it still remains one,” said Chetan Seth, an equity strategist at Nomura in Singapore. “Tightening macro- and micro-regulations has caused significant discomfort for equity investors and is the reason for China’s underperformance in 2021,” he said, referring to Beijing’s clampdown on the property sector and regulations on sectors such as education, e-commerce and fintech.

As such, China’s education businesses were the biggest losers of the year. Market valuations of private tutoring companies Gaotu Techedu and TAL Education Group were down 96% and 94%, respectively. Tens of thousands of teachers were reportedly laid off after companies were forced to turn into nonprofit entities under the government’s “double reduction” policy to ease students’ workload and their parents’ financial burden. 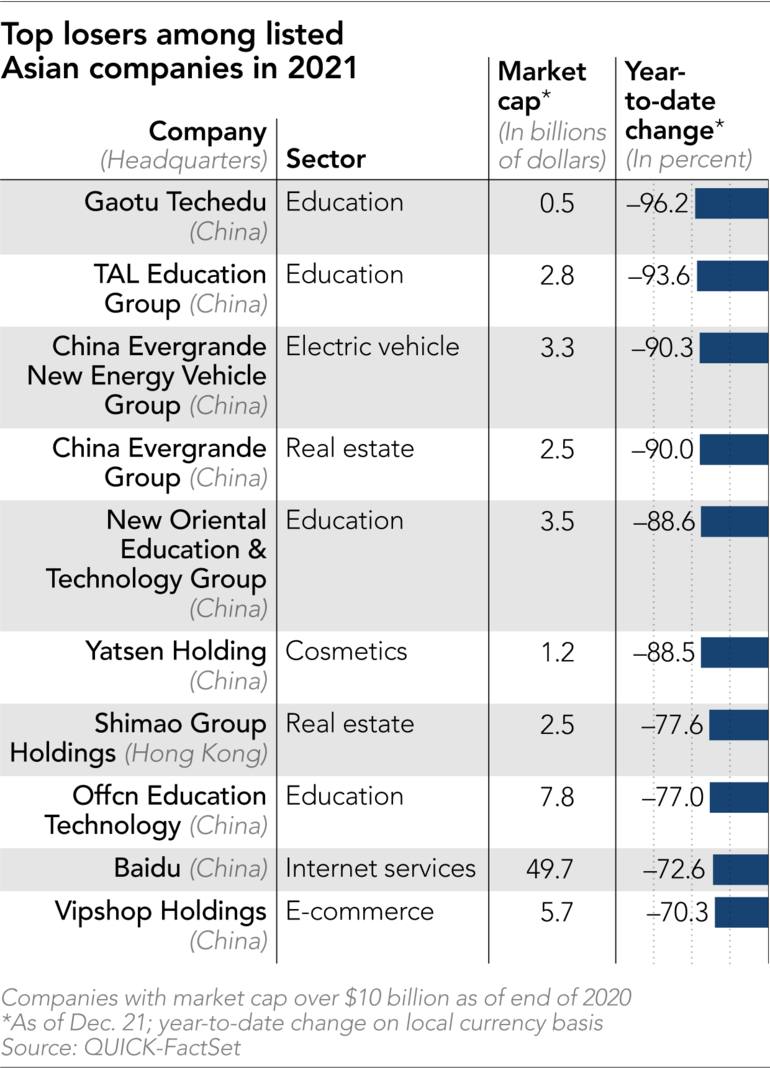 China’s most prominent tech companies – Alibaba Group Holding and Tencent Holdings – both dropped out of the global top 10 market capitalization ranking, with their valuations decreasing 51% and 22%, respectively, in 2021.

They came under pressure chiefly from two key pieces of legislation that sought to regulate monopoly business and data security, on top of greater scrutiny by U.S. authorities amid geopolitical tension with China. The tighter regulations are seen as a sign that Beijing is focusing more on hard technologies such as the semiconductor industry rather than on consumer internet, said Dan Wang of Gavekal Research.

The biggest winner of 2021 turned out to be China Telecom, one of the three state-owned oligopolistic carriers, which recorded a market capitalization increase of 162% – but this comes with a serious caveat.

The substantial leap in its market value came mainly from the company’s new listing in Shanghai in August, for which it had powerful state backing. The move came after China Telecom was forced to delist from New York due to alleged links with China’s military by U.S. authorities.

Listing in mainland Chinese bourses is widely seen as fundamentally different from listing in other markets, as Beijing restricts the free flow of equity investment with the rest of the world. This means the pricing mechanism differs even for the same company traded in the mainland and elsewhere, like Hong Kong. The Hang Seng Stock Connect China AH Premium Index, for instance, which tracks the price differential for dual listed shares, stood at a 47.1% premium on mainland listed stocks as of Friday. As such, it is difficult to say whether the sharp rise in China Telecom’s market cap reflects a fundamental change in the value of the company.

When it comes to digital stocks outside of China, Singapore’s e-commerce and online gaming group Sea, last year’s biggest winner in Asia, continued to gain but at a much slower pace of 24%, while South Korea’s Kakao rose 48%, suggesting investors still expect growth in digital services as the pandemic transforms lifestyles.

Meanwhile, gradual recovery from the pandemic has helped financial stocks, as seen in markets like India. Shares in the government-owned State Bank of India, the country’s largest commercial lender, rose 62%. It has a strong liability profile and the best operating metrics among public-sector banks, which helped its stock perform better than peers. 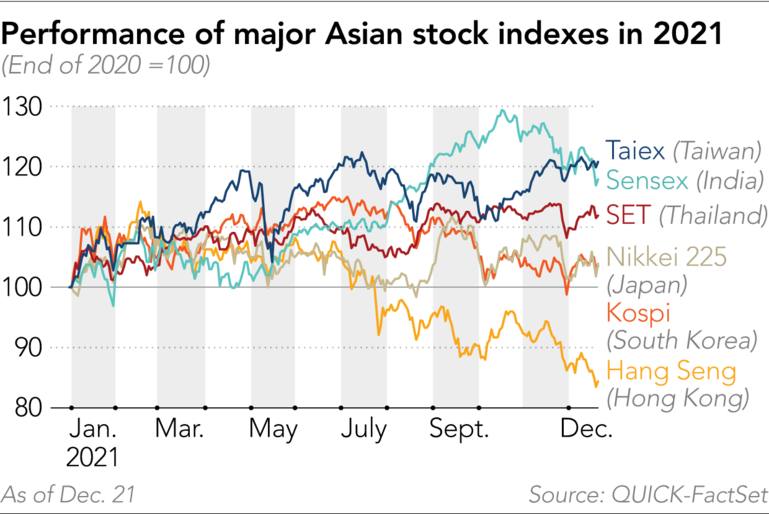 With the economic recovery gaining momentum over the past few months, the bank’s “overall strength in liability franchisee” and “decent provisioning cover” should continue to work in its favor, brokerage firm ICICI Direct said in a November research note.

Bajaj Finserv, the financial services arm of India’s Bajaj group, increased in value by 78%. The company has a presence in retail finance, life insurance and general insurance. In August, it announced that market regulator Securities and Exchange Board of India had given it in-principal approval to sponsor a mutual fund. Analysts see the company’s wide distribution reach and focus on profitability as some of the reasons the stock was among the top picks this year.

On the other hand, signs of a COVID recovery left some companies facing reduced demand, particularly makers of health care products. Among this year’s biggest losers in Asia were Malaysia’s Top Glove, the world’s largest maker of rubber gloves, and its local peer Hartalega. Their market values shrank 66% and 56%, respectively, in 2021.

Looking ahead, analysts say semiconductor makers and equipment makers will continue to benefit amid solid demand for chips for use in servers, reflecting a strong appetite for investment by cloud service providers like Amazon, Microsoft and Google.

“High-performance processors used in data centers will be in strong demand,” said Hisashi Moriyama, an analyst at JPMorgan, predicting another busy year ahead for high-end chip foundries like Taiwan Semiconductor Manufacturing Co., which is now the most valuable company in Asia.

Seth of Nomura said he is “quite constructive on Asia stocks in 2022,” though he noted the omicron coronavirus variant and the U.S. Federal Reserve’s recent hawkish policy pivot will likely lead to some volatility going into the first quarter.

With respect to China, Seth said its fiscal and monetary policies are becoming more supportive as authorities focus on supporting growth. “This will help China stocks, and consequently the performance of Asia, as the region’s largest market,” he said.