A year after Beijing kicked off a policy clampdown that roiled stock markets from Shanghai to New York, the most beaten-down targets – China’s technology firms – are still facing a rocky outlook.

The Hang Seng Tech Index, which tracks the nation’s biggest technology companies, has failed to break out of the tight trading range it has been in since July, following a 46% plunge. The cost of bearish options that profit from further losses in the index still far outstrips that of bullish ones, according to data compiled by Bloomberg. 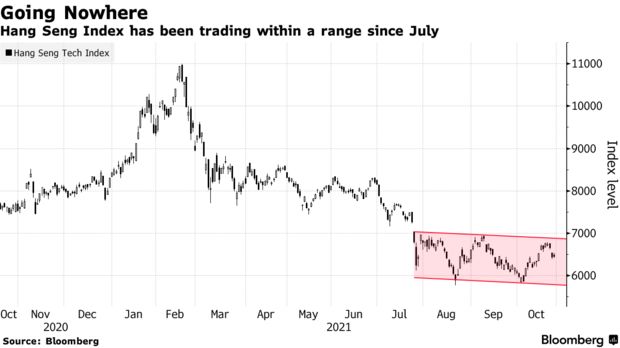 The crackdown started a year ago when Beijing on Nov. 3 shocked global investors by suspending the mammoth listing of Ant Group Co., the finance arm of Alibaba Group Holding Ltd. That was the beginning of a regulatory onslaught on private enterprise China blamed for exacerbating inequality, increasing financial risk and challenging the government’s authority.

At its most extreme, as much as $1.5 trillion was wiped off the value of Chinese shares, with the biggest victims being Alibaba, Kuaishou Technology and Tencent Holdings Ltd.

“The regulatory risk is not over yet and we are not very keen on the tech names right now,” said Michael Liang, chief investment officer at Foundation Asset Management (HK) Ltd. “Although their valuations have become attractive, the recent regulation and antitrust rules have already undermined their moats, so their growth will slow down.” 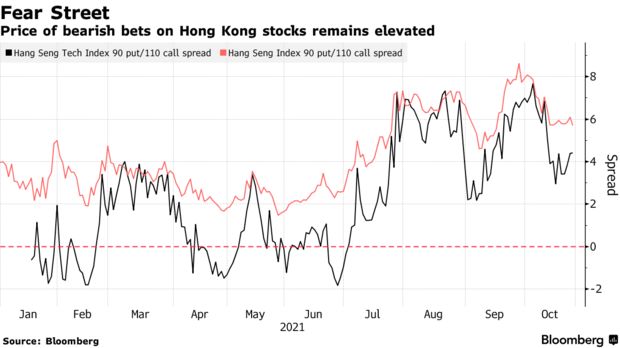 For Ken Xu, chief investment officer at Strategic Vision Investment Ltd., technology companies are no longer the best place to capture rapid growth in China as they are at a later stage in their life cycles.

“Ten or 15 years ago, the best decision at that time was to buy Tencent to get a 40% IRR,” Xu said in interview, referring to internal rate of return. “Now, unless they are really cheap, we could consider. But otherwise, in terms of growth, they are not as good as some new names.”

In general, Chinese technology companies’ profits may see an annual compound growth rate of 10%-30% in the next three years, according to Xu. That compares with a potential rate of 40%-60% for the battery sector, driven by electric vehicle and energy storage demand, he said.

Earnings estimates for Alibaba has been been slashed by 20% from a peak in January to the lowest in more than a year, while those for Tencent have also been reduced by as much as 9% from a recent peak in May, Bloomberg-compiled data show.

When Goldman Sachs Group Inc. spotlighted 50 Chinese stocks that stand to benefit from Xi’s “common prosperity” ambition, most companies are connected to themes such as manufacturing and green energy, while very few are from the internet sector.

The U.S. bank indicated a preference for hardware over software technology firms and suggested small companies over big ones, to avoid anti-monopoly regulation.

“We believe ‘mass but unique consumption’, ‘hard’ technology and manufacturing upgrading, green/renewable energy, and SOE reformers will be the structural trends that could reshape the alpha-generating universe for Chinese stocks,” strategists including Kinger Lau wrote. “On the contrary, luxury consumption, ‘soft’ tech with high data intensity, and socially-important sectors may see continuing regulation headwinds.” 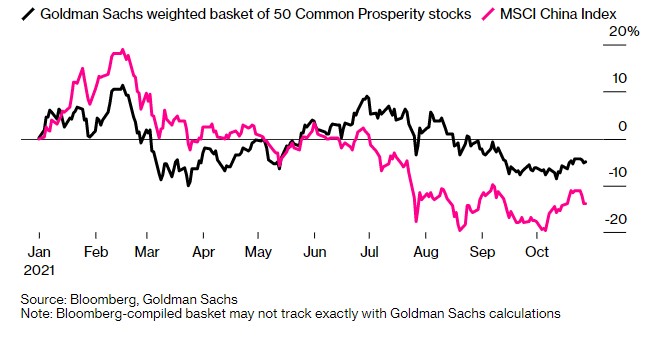 Still, despite pressure on earnings, some investors and strategists expect the peak of the crackdowns to be behind us.

Margin expansion is “something that people have underestimated going into next year,” Chelat said in interview. “We think the key areas of regulations have been addressed now, and we are becoming more optimistic.”