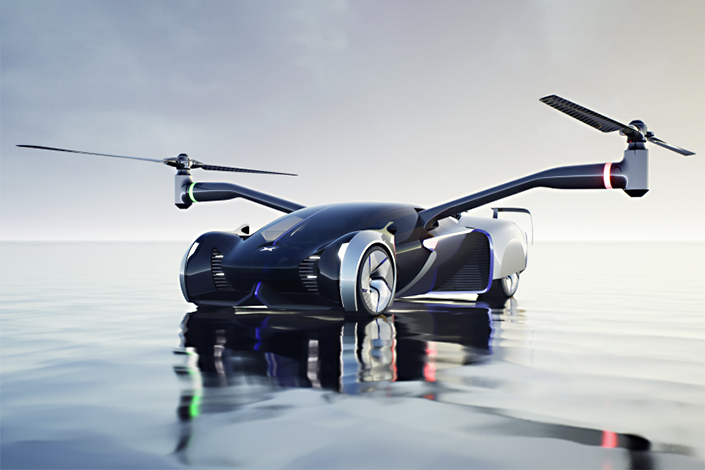 China’s Tesla challenger Xpeng Inc. has unveiled plans for its sixth-generation electric vertical take-off and landing (eVTOL) vehicle, capable of running on roads and flying at low altitude — but while the design may turn heads, analysts say its din could create turbulence.

Xpeng said the unnamed flying car, which was introduced at a company event on Sunday, will begin mass production by 2024 and will retail for less than 1 million yuan ($156,700). It will be fitted with two propellers installed on foldable arms that can extend from either side of the car’s body when it is in flight mode, giving it a wingspan of about 12 meters. The propellers will retract inside the car when it is in road mode.

Compared with most eVTOL vehicles which have six or more rotors, Xpeng’s two-propeller model needs larger blades to provide enough lift and propulsion power. This comes at the cost of creating more noise.

It is unclear why Xpeng chose the two-propeller design as most flying carmakers, including China’s EHang Holdings Ltd. and U.S.-based Joby Aviation Inc., prefer the widely used multiple rotors-supported distributed electrical propulsion technology that can provide better noise reduction efficacy and reduce the serious accident rate if a propeller fails.

According to a study on the societal acceptance of urban air mobility (UAM) in Europe published in May by the European Union Aviation Safety Agency and McKinsey & Company, participants of a noise test reported feeling more annoyed by urban flying car sounds than by sounds they already know.

In addition, the Xpeng flying car may find cities hard to navigate, as many urban roads are not wide enough to accommodate the vehicle’s 12-meter wingspan. However, a source from HT Aero, the designer of the Xpeng flying car, told Caixin that the vehicle has been developed for use in open fields instead of cities. HT Aero, a Guangzhou-based startup majority owned by Xpeng and its Chairman He Xiaopeng, has never sold a flying vehicle since it was founded in 2013.

That does not seem to have dampened investor enthusiasm. Last week, HT Aero raised $500 million in a series A funding round led by IDG Capital, 5Y Capital and Xpeng, which it said will be partially used to obtain an airworthiness certificate from regulators.

According to Zhang Chen, a senior business development manager at Thales SA, a French company that designs and builds aerospace and defense electrical systems, most eVTOL vehicles’ flight control systems developed from drone systems, making it hard for such vehicles to meet airworthiness requirements for carrying human passengers. When it comes to flying in urban airspaces, safety requirements for flying cars will be higher than those imposed on passenger aircraft, Zhang added.

A research report published by Lufthansa Innovation Hub in February said that flying car startups would need to spend at least $700 million to achieve commercialization of their products.

In announcing the new funding last week, HT Aero said that it is considering developing flying vehicles for individual consumers, which means it would need to overcome additional hurdles like individual licensing. But Xpeng said that it will simplify its flying vehicles’ driver control systems which will be supported by smart driver assistance software so that drivers have no need to attend professional training courses, an idea industry analysts consider unrealistic due to a lack of regulations in the field.

Currently, governments around the world are still in the process of studying the safety standards for flying cars, with no manufacturer having yet obtained an airworthiness certificate.

The Market Doesn’t Think XPeng Will Win The Race