Xpeng, which has ambitions to rival Tesla, has priced its shares at HK$165 each, helping the Guangzhou-based start-up raise HK$14 billion (US$1.8 billion), making it the biggest dual-primary listing by a US-listed Chinese company.

The price represents a discount of about 4.1 per cent to its closing price of US$44.32 on Tuesday on the New York Stock Exchange. It is also 8.3 per cent below the maximum price of HK$180 set for the retail tranche.

This is the guidance price and it will be finalised at a meeting later on Wednesday, sources familiar with the matter said.

Xpeng, known for its smart EVs such as its P7 sedan, is marketing 85 million shares in the Hong Kong offering. Each American depositary share will represent two shares in Hong Kong. Trading in Hong Kong is slated to start on July 7 under the stock code “9868”.

Shares that are listed in Hong Kong and the US are fungible, which means investors can buy and sell the shares on either exchange and their prices are unlikely to diverge too much.
Pharmaceutical company BeiGene was the first company from the mainland company to be dual-listed in the US and Hong Kong. It raised US$182.2 million in New York in 2016, before selling HK$7.08 billion worth of shares in Hong Kong in 2018.

Xpeng’s move to seek a dual-primary listing in Hong Kong following its New York listing less than a year ago last August could pave the way for Nasdaq-listed Chinese EV makers Li Auto and NIO to follow-suit. Li Auto listed last July while NIO did it in September 2018.

A dual-primary listing will enable these companies to be eligible for inclusion in Hong Kong exchange’s Stock Connect, which enables mainland Chinese investors to trade stocks listed in Hong Kong and vice versa. Such inclusion could help bolster these tech company’s investor base and trading volume.

China is the world’s largest car market, with 93 per cent of the 19.7 million passenger vehicles sold in 2020 powered by the traditional internal combustion engines, pointing to large room for growth for electric cars. Beijing wants home-grown carmakers to command 80 per cent of China’s electric vehicle market by 2025, according to the government’s “Made in China 2025” industrial master plan.

A Hong Kong listing will ensure that the still-unprofitable Xpeng’s is well funded to expand its share in a market which saw vehicle orders for Palo Alto, California-based Tesla EVs falling in May. For the three months ended March Xpeng’s net loss totalled 786.6 million yuan (US$120.1 million), widening from 629.8 million yuan a year earlier.

Xpeng’s IPO will rank as the fifth-largest in Hong Kong so far this year, behind Kuaishou Technology, JD Logistics, Baidu and Bilibili, according to Refinitiv data. 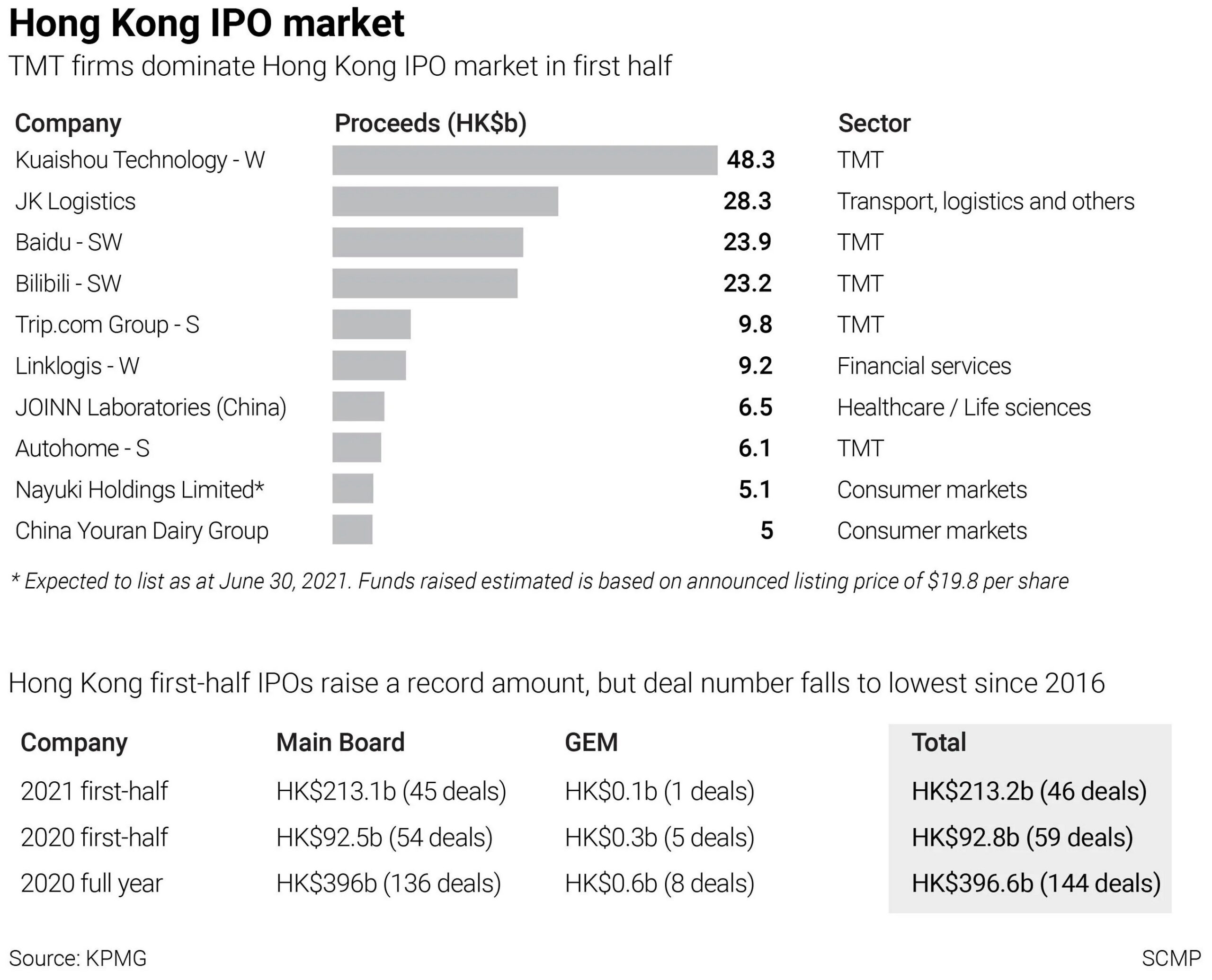 Xpeng’s IPO caps a busy June which helped the Hong Kong stock exchange to a record first-half in terms of funds raised. With fundraising expected to total US$27.3 billion, Hong Kong will rank as the third-biggest market behind the two US exchanges, data from Refinitiv shows.

A total of nine IPOs are marketing for investors’ money this week, compared to just one deal during the last week of May, according to data compiled from the exchange and brokerages.
The company plans to use the net proceeds on expanding its product portfolio, and developing software and hardware technology, it said in its prospectus.

JPMorgan and Bank of America are joint sponsors and joint bookrunners for the deal, with Citi and Citic Securities also joining in as bookrunners.

XPeng apologizes for illegal collection of facial images after penalty