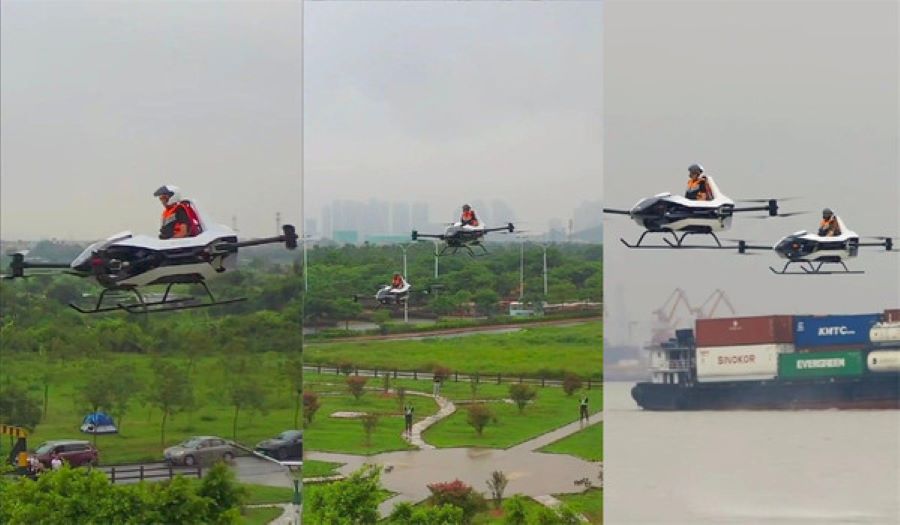 Photographs of a group of manned aircraft have attracted attention in China recently. The pictures show two pilots flying in the air in an aerocar, as iFeng Tech reported on Thursday. Xpeng Motors responded: “This is not only a flying car but our deployment for future travel.”

According to the report, the aircraft in the photos is the aerocar named “Traveler X2” released by Xpeng Motors Huitian on September 24. The flying vehicle is on display during the exhibition of the 13th China International Aviation and Aerospace Exhibition (Airshow China) which opened this week in the southern city of Zhuhai.

Tang Xiaoxu, the brand manager of Xpeng Motors Huitian, said at the airshow that the fifth generation Traveler X2 on display has completed the verification flight with a designed flight altitude of less than 1,000 m, a maximum flight speed of 130 km/h, a maximum takeoff weight of 760 kg, an endurance time of about half an hour and a flight distance of 50 km.

The most special thing about this flying car is an autonomous driving system, which can plan the flight path independently. However, Tang Xiaoxu said that this aerocar is unavailable to the public for the time being. “The flying car of the next generation will be really the coupling of cars and airplanes-with car wheels, and it can drive on the highway like real cars 90% of the time,” Tang added.

According to 21st Century Business Herald, many flying car brands made their debut at this airshow. Shanghai Fengfei Autoflight, which has just raised $1 trillion in new funding, brought its self-driving eVTOL manned aircraft-V1500M to Airshow China.

The eVTOL manned aircraft-V1500M is a flying car independently developed by the company, equipped with pure electric power system, with a maximum take-off weight of 1,500 kg and a passenger flight distance of 250 km.

At the same time, Duofu International Holding Group Co., Ltd. (Duofu Group) also participated in Airshow China with a flying car. Yang Zeming, President of Duofu Group, claimed that the company’s e-type flying car can operate at an altitude of 1,800 m, an air speed of 160 km/h and can convert air power to ground power in only three seconds. Furthermore, it can run on fuel and fly a distance of 450 km. Because its height is only 1.9 meters, it can be parked in any parking space or private garage.

21st Century Business Herald said that people’s attention aroused by flying cars at the airshow is actually a continuation of the huge waves caused by this industry in the capital market. Since this August, three UAV air transport companies – Joby, Lilium and Archer – have been successfully listed in the American capital market. Their emergence has attracted the market’s pursuit, and has also led analysts to predict that the eVTOL market will reach $1 trillion in 20 years.

Beijing to impose sanctions on US defence firms Lockheed and…

Stocks are a ‘falling knife’ without fundamental changes in…